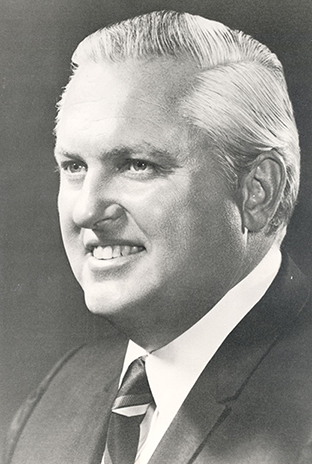 Attorney and governor of Oklahoma, David Hall was born in Oklahoma City October 20, 1930, to William A. "Red" Hall and Audrey Nell Hall. Hall graduated from Classen High School, and he was president of the student body. An outstanding student at the University of Oklahoma, he was tapped for Phi Beta Kappa. To pay for his education he waited tables and clerked in a clothing store, among other jobs. After two years as a U.S. Air Force navigation instructor Hall briefly attended law school at Harvard University before returning to Tulsa to complete his legal education. As a student at the University of Tulsa Law School in 1955 Hall met Jo Evans on a blind date. They married in June 1956, and the union produced three children, Douglas, Nancy, and Julie.

Hall served as Tulsa County attorney from 1962 until he unsuccessfully ran for the Democratic nomination for governor in 1966. During his tenure as county attorney he successfully prosecuted 940 out of 1,000 criminal cases. After four years of private law practice, Hall announced his candidacy for governor in 1970. His campaign slogan, "Hall of Oklahoma for All of Oklahoma," helped him manage one of the state's greatest upsets, and he defeated incumbent Republican Gov. Dewey Bartlett in the November 1970 general election. Hall won the governor's race by a margin of only 2,181 votes, the closest gubernatorial race in state history.

Hall's tax reforms put Oklahoma back on a sound financial basis at a time when the need for new state revenue had reached a crisis. His concern for education resulted in major efforts to increase per-pupil expenditures and bring teachers' salaries up to the regional average. Hall also pushed legislation to decrease the high teacher-pupil ratio and make public school classes smaller, and he proposed lowering the mandatory school age and mandating kindergarten attendance.

Hall also worked diligently for reform of Oklahoma's penal system. In early 1973, at his bidding, the legislature had appropriated a major increase in prison funds and enacted reform measures. However, before reform could be fully implemented, in July 1973 hundreds of inmates rioted at the Oklahoma State Penitentiary at McAlester. They took twenty hostages, including a deputy warden. Armed with knives and meat cleavers, the prisoners held police and national guardsmen at bay for twenty-two hours while Governor Hall directed negotiations. Fires set by rioters caused $20 million in damage. Oklahoma's worst prison riot left three inmates dead.

David Hall was defeated in his bid for reelection in 1974. Nine days after his term ended, a federal grand jury indicted the former governor on four charges of bribery and extortion. He was implicated in a plan to receive payment for influence over investment of state retirement funds. Although he claimed innocence, he was convicted of bribery in March 1975 and served eighteen months in a federal correctional institution in Arizona. After his release he moved to California to engage in real estate and investments. David Hall died on May 6, 2016, in La Jolla, California.

The following (as per The Chicago Manual of Style, 17th edition) is the preferred citation for articles:
Bob Burke, “Hall, David,” The Encyclopedia of Oklahoma History and Culture, https://www.okhistory.org/publications/enc/entry.php?entry=HA007.