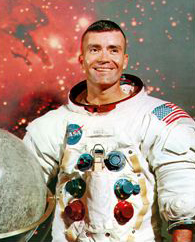 Former NASA astronaut and aerospace company executive Fred Wallace Haise, Jr., was born on November 14, 1933, in Biloxi, Mississippi. His parents were Fred Wallace and Lucille Blacksher Haise, Sr. A graduate of Biloxi High School Haise, Jr., received an associate of arts degree in 1952 from Perkinston Junior College (now Mississippi Gulf Coast Community College). On June 4, 1954, he married Mary Griffin Grant, with whom he had four children. Five years later he graduated with honors with a bachelor of science degree in aeronautical engineering from the University of Oklahoma. Haise finished postgraduate courses at the U.S. Air Force Aerospace Test Pilot School at Edwards Air Force Base in California and the Program for Management Development at Harvard Business School in 1964 and 1972, respectively. In 1970 Western Michigan University presented him with an honorary doctorate of science.

Before working for NASA Haise served in several military branches. In October 1952 he was a naval aviation cadet at the Naval Air Station in Pensacola, Florida. From 1954 to 1956 he was a fighter pilot in the U.S. Marine Corps at Cherry Point, North Carolina. For two years beginning in 1957 he served as a fighter interceptor pilot in the Oklahoma Air National Guard. He was also a captain in the U.S. Air Force from 1961 to 1962.

In 1966 NASA hired Haise as an astronaut. He had previously been working for NASA as civilian research pilot. As an astronaut he was immediately assigned as backup lunar module pilot for Apollo 8 and Apollo 11. However, he did not travel into space until the Apollo 13 mission in 1970. The purpose of that mission was to survey the Fra Mauro formation on the moon. However, the voyage was aborted after the explosion of an oxygen tank that was critical to their objective. Haise, Jr., James A. Lovell, and John L. Swigert spent five days and twenty-two hours in space before they returned to Earth near the Samoan Islands in the South Pacific Ocean on April 17, 1970. Although Haise was slated as the backup for the Apollo 16 mission, he would not return to space. However, Haise transferred to the space shuttle program, and in 1977 he flew and successfully landed the Enterprise.In June 1979 he left NASA.

In July 1978 Mary and Fred Haise divorced. He married F. Patt Price in 1979. After his retirement from NASA Haise became vice-president and later president of Grumman Technical Services at Titusville, Florida. He was also president of Northrop Worldwide Aircraft Services, located in Lawton, Oklahoma. He retired from Grumman in 1996. Haise was inducted into the U.S. Astronaut Hall of Fame in 1997 and the Oklahoma Aviation and Space Hall of Fame in 2001.

The Apollo 13 mission has been popularized in several movies and a television miniseries.In 1974 a movie made for television entitled Houston, We've Got a Problem gave a fictional account of the problems faced by the NASA ground personnel. The mission was depicted in the 1995 docudrama film Apollo 13, directed by Ron Howard and with William "Bill" Paxton portraying Haise. Three years later the HBO television miniseries From the Earth to the Moon aired. It documented twelve of the Gemini, Mercury, and Apollo missions including Apollo 13.

The following (as per The Chicago Manual of Style, 17th edition) is the preferred citation for articles:
Linda D. Wilson, “Haise, Jr., Fred Wallace,” The Encyclopedia of Oklahoma History and Culture, https://www.okhistory.org/publications/enc/entry?entry=HA060.