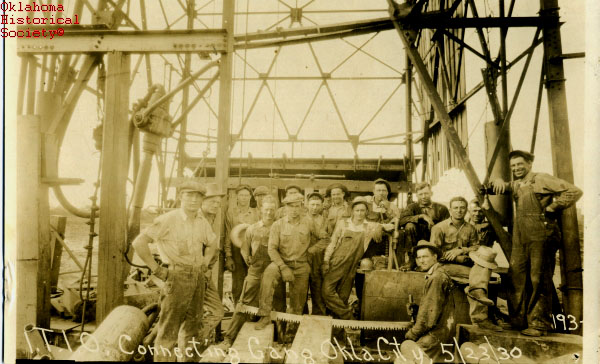 The beginnings of the Indian Territory Illuminating Oil Company (ITIO) date back to 1895 when Henry Foster, a Kansas banker, applied for an oil lease on the entire 1.5 million-acre Osage Indian reservation (present Osage County, Oklahoma). Although Foster died before approval of this blanket lease, his brother, Edwin B. Foster, signed the document on behalf of his brother's estate on March 16, 1896. The lease was operated under the auspices of the Phoenix Oil Company, and subleasing was arranged, with the Osage Oil Company on the eastern part of the reservation. By 1900 some drilling had been done, but little progress was made in developing the property into a viable economic entity. Then on December 1, 1901, the assets of both the Phoenix Oil and Osage Oil companies were combined to form the ITIO. Edwin B. Foster died soon thereafter, and Henry V. Foster, Henry Foster's son, became the company president.

Henry V. Foster ignored the accepted practice of drilling and producing leases with one's own resources. Instead, he divided the entire Osage lease into blocks three miles long east to west and one-half mile wide north to south and subleased them to other companies on a bonus and royalty basis. He ultimately leased to seventy-five separate companies and retained a number of leases for ITIO to develop. Unfortunately, early in 1903, before his plan began to bear fruit, the company went into receivership. It was during this brief time that Theodore N. Barnsdall bought 51 percent of stock in the company. After that, ITIO prospered, and in 1906, when the blanket lease was available for renewal, the company suffered criticism for operating as a monopoly. Nevertheless, their lease was renewed for another ten years, but with the acreage reduced from all Osage lands to 680,000 acres on the reservation's eastern side.

Foster continued to operate ITIO profitably but strictly within the bounds of the Osage lands. On July 1, 1912, Barnsdall sold all of his assets, including his 51 percent ownership in ITIO, to the Empire Distributing Gas Company, a subsidiary of the Cities Service Company. Thus ITIO, which had subsidiaries such as Osage Producers Gas Company, Delmar Oil Company, and Pawhuska Oil and Gas Company, became itself a subsidiary of Cities Service although it continued to operate independently. In 1916, when the Osage lease again became eligible for renewal, ITIO's contract was cancelled, and the Osage lands were opened to general leasing.

With the loss of the Osage lease as its operating base, ITIO was forced to begin operations at other locations across Oklahoma. Beginning in 1920 it started leasing in the Seminole vicinity and by 1923 was a major oil operator in that area. Then Henry V. Foster became convinced that there was oil in the Oklahoma City area and began drilling at various locations there. His dogged persistence was rewarded with the Oklahoma City Field discovery well, brought in by ITIO on December 4, 1928. This touched off a major oil boom in which the company became a significant player. Foster, who had also formed the Foster Oil Company which held all his ITIO stock, sold that independent company to Cities Service on February 3, 1930, which gave the parent company 90 percent ownership of ITIO. By 1940 Cities Service had acquired the rest of the ITIO stock, and the company ceased to exist.

Gerald Forbes, "History of the Osage Blanket Lease," The Chronicles of Oklahoma 19 (March 1941).

The following (as per The Chicago Manual of Style, 17th edition) is the preferred citation for articles:
Bobby D. Weaver, “Indian Territory Illuminating Oil Company,” The Encyclopedia of Oklahoma History and Culture, https://www.okhistory.org/publications/enc/entry.php?entry=IN019.