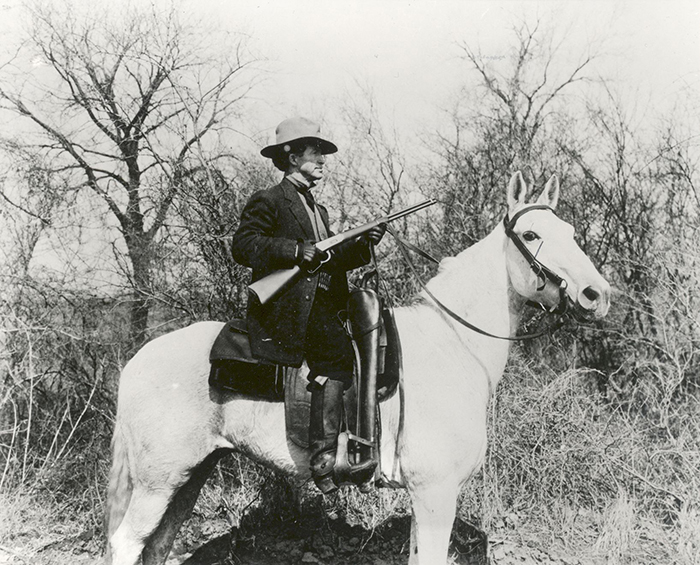 An attorney, an outlaw, and a gubernatorial candidate, Alphonso J. "Al" Jennings was born in Virginia in 1863. Jennings settled at El Reno, Oklahoma Territory, and served as Canadian County prosecuting attorney from 1892 until 1894. In 1895 he joined his brothers, Ed and John, in a law practice at Woodward. In October of that year Ed Jennings was killed, and John Jennings wounded, in a shootout with rival attorney Temple Houston. Al Jennings left Woodward following Houston's acquittal in 1896 and wandered before gaining employment as a ranch hand in the Creek Nation.

While working near present Bixby in Creek County, Jennings joined an outlaw band. During the summer and fall of 1897 the desperados, often referred to as the "Jennings gang," robbed trains, general stores, and a post office, with little monetary success. Jennings was wounded by law officers on November 30, 1897, and captured one week later on Carr Creek near Onapa in present McIntosh County. In 1899 he was sentenced to life in prison, but due to the legal efforts of his brother John, his sentence was reduced to five years. He was freed on technicalities in 1902 and received a presidential pardon in 1907.

Al Jennings moved to Oklahoma City in 1911 and soon became active in politics. In 1912 he won the Democratic nomination for Oklahoma County attorney, but he lost the general election. In 1914 he made an unsuccessful run for the office of governor of Oklahoma. Enjoying the popularity of his starring role in the film adaptation of his 1913 biography, Beating Back, Jennings campaigned openly about his past and won votes with his honesty. One of six democratic candidates, he finished third in the primary behind James B. A. Robertson and Robert L. Williams. Retiring from law and politics, Jennings moved to California and worked in the motion-picture industry making Westerns. He died in Tarzana, California, on December 26, 1961.

The following (as per The Chicago Manual of Style, 17th edition) is the preferred citation for articles:
Jon D. May, “Jennings, Alphonso J.,” The Encyclopedia of Oklahoma History and Culture, https://www.okhistory.org/publications/enc/entry.php?entry=JE006.