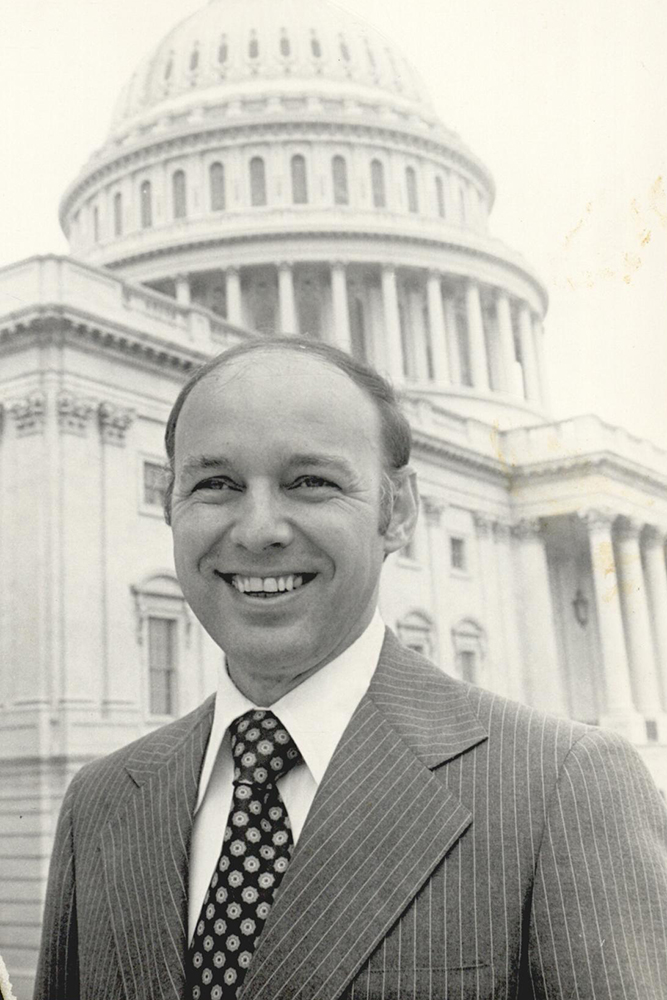 Born in Muskogee, Oklahoma, on May 5, 1939, James Robert Jones was the youngest child of Robert P. and Margaret Wich Jones. At age eight he was fascinated by politics after he visited the offices of the county attorney, Ed Edmondson. By age twelve Jones stumped the district when Edmondson campaigned for the U.S. Congress and in 1958 served as J. Howard Edmondson's press secretary during his gubernatorial campaign. Although only a teenager, Jones understood the workings of the press because of his several years' employment as a reporter for Muskogee newspapers.

Graduating from the University of Oklahoma in 1961 with a degree in journalism and government, Jones became U.S. Rep. Ed Edmondson's administrative assistant and attained a law degree at Georgetown University in 1964. That year he served as a captain in the U.S. Army counterintelligence and as a special military aide to Pres. Lyndon B. Johnson. Leaving the military in 1965, he became an assistant to Johnson's appointments secretary and became the appointments secretary in 1968. That year the United States Jaycees named Jones as one of the "Ten Outstanding Young Men of America." As an insider in the Johnson administration, Jones learned much about politics.

When Johnson left office in January 1969, Jones returned to Tulsa, Oklahoma, and practiced law with his wife. He had married the former Olivia Barclay in 1968, and they had two sons. In 1970 Jones decided to reenter the political fray when he campaigned as a Democrat for the First District seat held for years by Republican Page Belcher. Although defeated, Jones fought an aggressive battle. Two years later, when Belcher retired, Jones ran again and won, marking the first of seven successful congressional campaigns.

During his fourteen years in Congress Jones served on several committees, including Armed Services, Interior and Insular Affairs, Ways and Means, and Budget. As a freshman congressman he served as a zone whip and later, a deputy whip. Believing in compromise rather than confrontation, the solon was known for his conservative stance on many issues. Not an extreme right-winger, Jones tried to adapt to the views of his constituents, many of whom lived in affluent and largely Republican Tulsa. He came to the political fore in 1978 while a member of the tax-writing Ways and Means Committee. When the Jimmy Carter White House plan for a tax cut failed to garner majority support, Jones secured House backing for a more conservative measure. His action on the 1978 tax bill made him a major leader of the conservative Democratic-Republican bloc in the House. In 1979 he won a seat on the Budget Committee, garnering additional fiscal experience. Although the Democratic Steering Committee usually placed more liberal members on this committee, Jones appealed successfully to the Democratic Caucus that the party needed more fiscal conservatives on the Budget Committee.

Washington insiders credited Jones's rise in political stature to his awareness of the power shift from the Frost Belt to the Sunbelt, from blue collar workers to white collar suburbanites, and from New Deal policy to a pro–big business, anti–big government strategy. Although often at odds with the House leadership, he captured the chair of the Budget Committee in December 1980, defeating David Obey, a Wisconsin liberal and nominee of Speaker Thomas P. "Tip" O'Neill.

As chair, Jones soon found himself with little support from either party. Once able to force his party's leadership to alter its programs to reflect the growing conservatism, he now learned that Speaker O'Neill had no intention of moving to the right to capture either party's conservative votes. Indeed, he excluded Jones from budget meetings between the Democratic Party leadership and the White House. Likewise, more liberal Republicans tended to exercise party loyalty to Pres. Ronald Reagan and his economic policy. In 1983 Jones shepherded a budget through the House; however, the document was more the product of the party's leadership than the committee chair's. Leaving the Budget Committee in 1985, he continued to serve on Ways and Means and chaired the social security subcommittee.

In 1986 he made an unsuccessful bid for the U.S. Senate seat held by Don Nickles. Afterward Jones practiced law in Washington, D.C. From 1989 to 1993 he was chair and chief executive officer of the American Stock Exchange in New York City. He served as ambassador to Mexico from 1993 to June 1997, assisting with the passage and implementation of NAFTA and working to quell drug trafficking. While in the diplomatic service, he was elected to the Oklahoma Hall of Fame in 1994. After leaving public service, Jones was president of Warnaco International, a clothing manufacturer, from 1997 to 1998. At the beginning of the twentieth-first century he served as senior counsel to Manatt, Phelps, and Phillips, a Washington, D.C. legal firm.

The following (as per The Chicago Manual of Style, 17th edition) is the preferred citation for articles:
Carolyn G. Hanneman, “Jones, James Robert,” The Encyclopedia of Oklahoma History and Culture, https://www.okhistory.org/publications/enc/entry.php?entry=JO020.