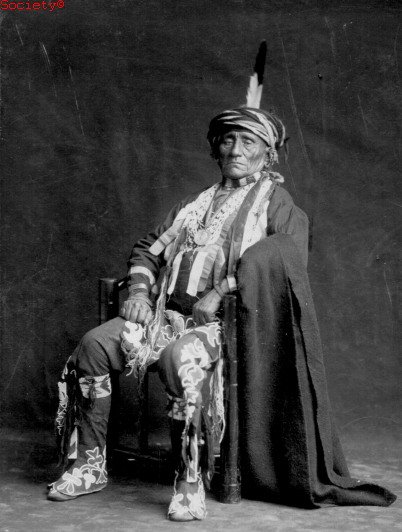 Once known as the Kansa (or Konza) tribe, the Kaw are a people of Dhegiha-Siouan linguistic descent who migrated from the lower Ohio Valley to present northeastern Kansas prior to 1750. In nineteenth-century Kansas they fell victim to white land speculators, traders, missionaries, and the federal government's policy of tribal concentration and dissolution. The result was their forced removal to a small reservation in present Kay County, Oklahoma, in 1873 and the allotment of their land by federal law in 1902. Among the 249 allottees was Charles Curtis, a future vice president of the United States (1929–33), who played a significant role in the Kaw allotment proceedings. Between 1902 and their legal reconstitution as a federally recognized tribe in 1959, social and legal struggles were a common feature of nascent Kaw nationalism.

Under the allotment law of 1902 the Kaw tribe retained 260 acres of trust land of their former reservation. When this tract was inundated by the Kaw Reservoir in the mid-1960s, the Kaw Council House was moved to a smaller tract nearby and the Kaw cemetery to Newkirk, Oklahoma. Thus Newkirk and then Kaw City, the present tribal headquarters some fifteen miles southeast of Newkirk, emerged as the epicenters of the Kaw Nation of Oklahoma.

A revised Kaw constitution was adopted in 1990, and a tribal court was instituted two years later. Other important Kaw projects are a housing project, a museum and social service facility, and some thirty additional projects in Oklahoma and Kansas. In 2000 the Kaw Nation purchased a remnant of the pre-1873 reservation, a tract near Council Grove, Kansas, which will be developed into a park for interpreting their sojourn in that state. In January 2002 the Kaw Nation of Oklahoma membership totaled 2,553, a dramatic increase from the 249 persons on the allotment roll a century ago. The last Kaw full blood, William Mehojah, died April 23, 2000. By the end of the twentieth century the Kaw had begun cultural revitalization activities that included providing instruction in the Kaw language to students in the local elementary schools and to adults through various electronic media.

The following (as per The Chicago Manual of Style, 17th edition) is the preferred citation for articles:
William E. Unrau, “Kaw (Kansa),” The Encyclopedia of Oklahoma History and Culture, https://www.okhistory.org/publications/enc/entry.php?entry=KA001.