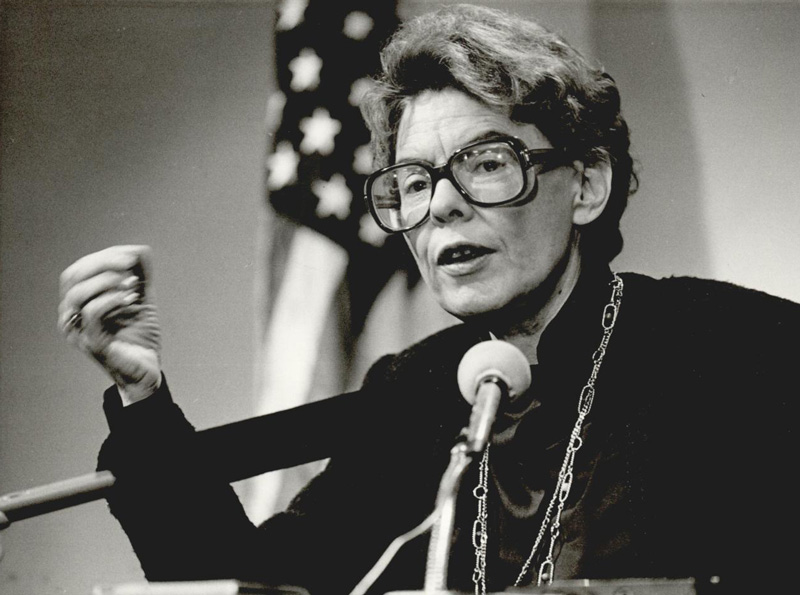 Jeane Jordan Kirkpatrick was born in Duncan, Oklahoma, on November 19, 1926, to oilman Welcher and Leona Jordan. The family moved to Illinois when Jeane was twelve years old. An avid reader as a child, Jeane Jordan had an intense desire for learning that continued throughout her life. She attended Stephens College in Missouri and Barnard College in New York. Although a variety of subjects interested her, she decided to major in political science. Following graduation from Barnard in 1948, she continued her education at Columbia University, receiving a master's degree in political science in 1950.

In 1951 Jordan accepted a position at the State Department in Washington, D.C., but she soon left to take a fellowship at the University of Paris's Institute of Political Science. In 1953 she returned to the United States and worked at the Department of Defense. In 1955 she married Evron Kirkpatrick, whom she had met while working at the State Department. They had three sons: Douglas, John, and Stuart.

A lifelong Democrat, Kirkpatrick worked in both state and national campaigns including Hubert Humphrey's 1972 presidential campaign. She grew increasingly dissatisfied, however, with the Democratic Party's liberal faction and in 1972 cofounded the Coalition for a Democratic Majority. Her conservative writings regarding U.S. foreign policy impressed Ronald Reagan, and during his 1980 presidential campaign she worked as his national security advisor. Upon Reagan's election, he appointed her as U.S. ambassador to the United Nations, a position she held from 1981 to 1985. In 1986 she joined the Republican Party and returned to her teaching position at Georgetown University.

Kirkpatrick continued to speak publicly regarding U.S. foreign policy. During the 1996 Republican National Convention she accused the administration of Pres. William J. Clinton of not maintaining the nation's military preparedness, arguing that Clinton allowed the United Nations to have control over United States troops. She also stated that he had sent American troops into dangerous areas where the United States had no national interests and then had not supported them with adequate arms, training, or intelligence information. She also contended that he had not provided funding for a missile defense system while other countries were increasing their weaponry, including nuclear arsenals, thereby placing the United States and its allies at risk.

Kirkpatrick wrote several books, including Political Woman, The New Presidential Elite, and The Withering Away of the Totalitarian State. She received numerous awards including the Presidential Medal of Freedom and the Hubert H. Humphrey Award. In 1982 Oklahoma honored Kirkpatrick by inducting her into the Oklahoma Hall of Fame. She died in Bethesda, Maryland, on December 7, 2006.

The following (as per The Chicago Manual of Style, 17th edition) is the preferred citation for articles:
Connie G. Armstrong, “Kirkpatrick, Jeane Jordan,” The Encyclopedia of Oklahoma History and Culture, https://www.okhistory.org/publications/enc/entry.php?entry=KI021.