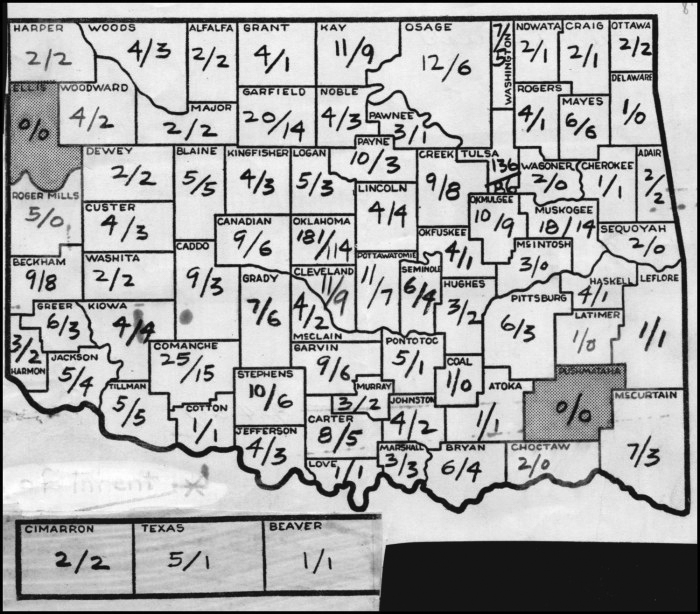 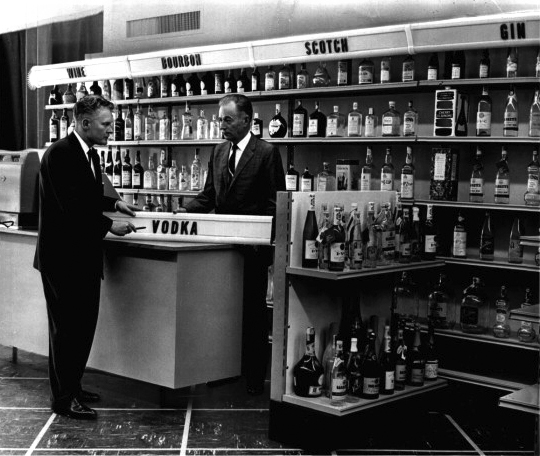 "Signs of the time were being readied in this mock up liquor store in downtown Oklahoma City Thursday for a 'dry-run' inspection by state legislators and officials," June 1, 1959
(2012.201.B0373.0079, photo by Bob Albright, Oklahoma Publishing Company Photography Collection, OHS). 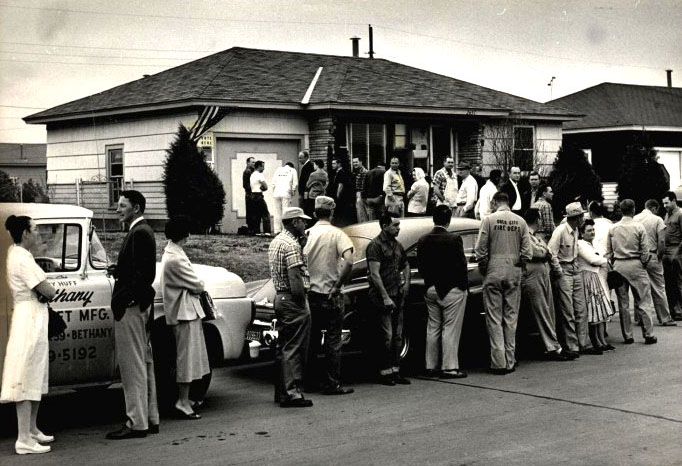 In 1959 the citizens of Oklahoma voted to end the prohibition against selling wholesale and retail packaged alcoholic beverages. Prohibition had been enacted with statehood in 1907. For half a century a flourishing bootleg business had proliferated throughout the state while anti-prohibitionists launched numerous campaigns to make Oklahoma go "wet." As in the rest of the nation, the Woman's Christian Temperance Union and affiliates held sway and kept the state "dry." The Eighteenth Amendment to the U.S. Constitution, which had brought about national prohibition in 1919, was repealed in 1933 with the Twenty-first Amendment, but Oklahoma continued to prohibit the sale of intoxicants.

Increasing population mobility during the Great Depression, World War II, and the postwar decade brought about a decline in rural population, an urban shift, and a resulting change in social attitudes. Repeal advocates pressed for a statewide election to end prohibition. The gubernatorial race of 1958 made liquor an issue. Republican candidate Phil Ferguson backed repeal. His Democratic opponent, J. Howard Edmondson, did not actively oppose it, and he was elected.

On January 5, 1959, both houses of the legislature heard appeal resolutions that would set up a special election. On April 7, 1959, Oklahomans went to their polling places and voted 396,845 to 314,380 to allow the sale of packaged liquors. On May 14 the House passed the Liquor Control Bill, and on June 17 the Senate passed the House bill with amendments, which the House approved on June 23. Governor Edmondson signed the Liquor Control Act into law on June 23.

Without a code of regulations a law has no teeth; the Liquor Control Act of 1959 set up a commission to write and issue regulations for wholesale and retail outlets to follow when buying and selling their products. The Alcoholic Beverage Laws Enforcement Commission (known as the ABLE Commission) issued licenses and enforced the regulations for liquor sales and stores. Between July 1 and September 1, 1959, the commission approved 473 licenses for package sales in retail stores. At 10 a.m. on the morning of September 1, liquor stores opened their doors as legal businesses for the first time since 1907. As noted by historian Jimmie Franklin, "An entire era in Oklahoma's social and political life had been ushered out, and a new business ushered in." Subsequent legislation in 1984 allowed liquor-by-the-drink county option, and in 2018 the last of Oklahoma's "dry" counties voted to allow the sale of liquor by the drink. In 2016 the parameters of grocery store and liquor store sales were expanded by legislation, and after October 1, 2018, groceries were allowed to sell full-strength beer and wine.

The following (as per The Chicago Manual of Style, 17th edition) is the preferred citation for articles:
Dianna Everett, “Liquor Control Act of 1959,” The Encyclopedia of Oklahoma History and Culture, https://www.okhistory.org/publications/enc/entry?entry=LI018.