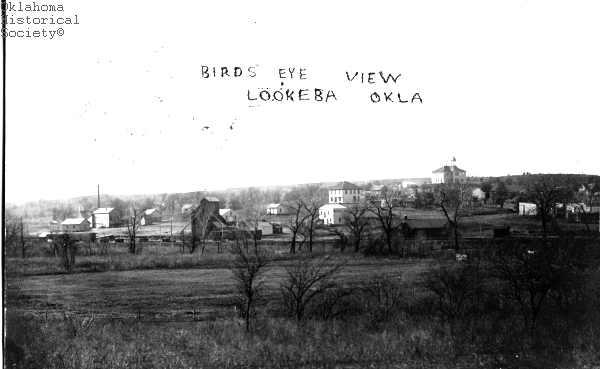 The north-central Caddo County community of Lookeba is situated just east of U.S. Highway 281/State Highway 8, approximately twenty-four miles north of Anadarko and fifty-nine miles west of Oklahoma City. Lookeba was founded in 1902 on 160 acres along the proposed route of the Enid and Anadarko Railway. The Chicago, Rock Island and Pacific Railway purchased the Enid and Anadarko Railway in 1903; the Lookeba track was abandoned in 1939. Lookeba (Lō-kē′-bä) was named in honor of Messrs. Lowe, Kelly, and Baker, townsite promoters. Its post office was established in June 1902, and the town incorporated in 1908.

Initial Lookeba businesses included a grocery store, owned by George W. Knapp, the Davis Restaurant, the Klondike Saloon, Pugh and Ridlin's Livery Barn, and H. M. Christian's Department Store. The town's first cotton gin opened in 1904, and the Lookeba State Bank was organized in 1910. A grain elevator, a movie theater, two garages, and a bakery were operating by the mid-1930s. Local newspapers published in the first half of the twentieth century included the Lookeba Light, the Lookeba Index, the Lookeba News, and the New Era.

Large quantities of hogs, cattle, corn, cotton, and broomcorn were exported from Lookeba as early as the 1910s. Over twenty thousand bushels of seed corn and 4,584 bales of cotton were produced there in 1925. Poultry and alfalfa became important commodities during the 1920s, as did tomatoes in the 1930s. Peanuts replaced cotton and corn as a principal crop during the 1950s, and area farmers started growing potatoes soon thereafter.

Lookeba had 131 inhabitants and four businesses in the year 2000, including an automotive repair shop and a gasoline station and convenience store. Local children attend the Lookeba-Sickles School District, which was consolidated in 1960. District enrollment for 2000 was 213. In 2010 the census counted 166 residents. The Lookeba area has remained agricultural.

The following (as per The Chicago Manual of Style, 17th edition) is the preferred citation for articles:
Jon D. May, “Lookeba,” The Encyclopedia of Oklahoma History and Culture, https://www.okhistory.org/publications/enc/entry.php?entry=LO012.