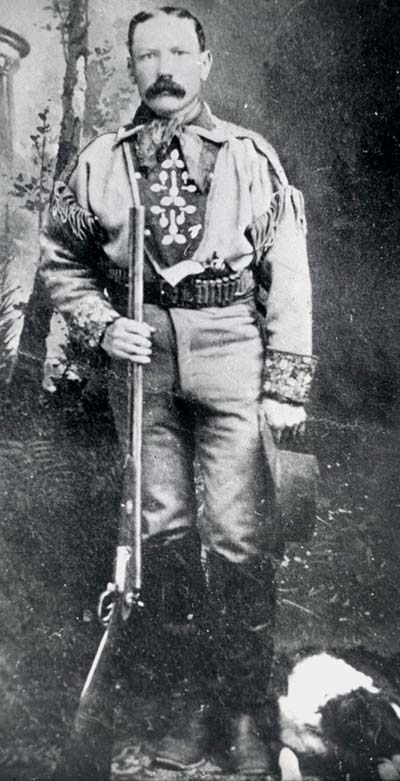 Deputy U.S. Marshal Chris Madsen was born Chris Madsen Rormose in Denmark in 1851. Upon immigrating to the United States in 1876, he dropped Rormose. Madsen told fanciful stories about earlier service in the Danish Army and the French Foreign Legion. Actually, he had been a criminal, and between 1869 and 1874 he had served five sentences in a Copenhagen prison for begging, vagrancy, fraud, and forgery. Prison records reveal Madsen an intelligent but cold, artful scoundrel who had no intention of changing his ways. The records imply that the Danish government paid Madsen's passage to the United States, a common practice by nations to purge habitual criminals.

Arriving in New York City, Madsen enlisted in the U.S. Army on January 21, 1876, and served fifteen years in the Fifth Cavalry. Although he also embellished accounts of his army experience, he did participate in the Bighorn-Yellowstone Expedition shortly after the Battle of the Little Bighorn (1876) and saw significant action against the Ute Indians in September 1879. While serving in the army, Madsen was court-martialed, but acquitted, for stealing government grain; but later convicted for larceny, he served five months in the Wyoming Territorial Penitentiary.

Discharged on January 10, 1891, Madsen became a deputy U.S. marshal under Marshal William Grimes in Oklahoma Territory, a position he held until 1893. Early in 1893 U.S. Marshal Evett D. Nix was relieved from office for gross malfeasance. The federal inspector also recommended that Madsen and others be relieved for filing false reports. Madsen resigned and went to work for the U.S. marshal in the Western District of Missouri.

Later returning to Indian Territory, he was appointed as a special deputy in the territory's Southern District in early March 1898. That year he joined Theodore Roosevelt's Rough Riders, serving as quartermaster sergeant. After the Spanish-American War ended, Madsen returned to Indian Territory and served as a deputy U.S. marshal. After John L. "Jack" Abernathy became U.S. marshal of Oklahoma Territory in February 1906, Madsen worked as his chief deputy. He then became interim U.S. marshal from January 1 to March 31, 1911, because Abernathy was removed from office. After leaving active law enforcement in 1913, Madsen worked as a guard, a court bailiff, and as superintendent at the Union Soldiers' Home.

Madsen had a long career as a deputy U.S. marshal; however, he and various writers greatly inflated his reputation as a "terror to evil doers." Rarely involved in any gunfights, he spent most of his service in administrative work. On January 9, 1944, at age ninety-two Madsen died in the Masonic Home for the Aged in Guthrie while recovering from a broken hip. He was buried in Yukon, Oklahoma.

Nancy B. Samuelson, Shoot From The Lip: The Lives, Legends, and Lies of the Three Guardsmen of Oklahoma and U.S. Marshal Nix (Eastford, Conn.: Shooting Star Press, 1998).

The following (as per The Chicago Manual of Style, 17th edition) is the preferred citation for articles:
Nancy B. Samuelson, “Madsen, Chris,” The Encyclopedia of Oklahoma History and Culture, https://www.okhistory.org/publications/enc/entry.php?entry=MA005.