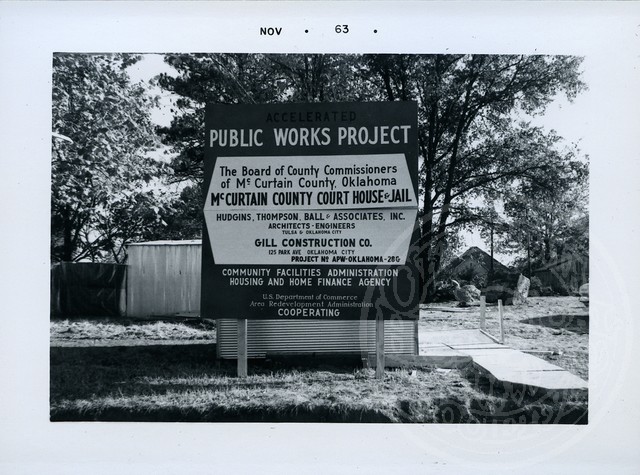 At 1907 statehood McCurtain County was established with Idabel designated as the county seat. The name McCurtain honored a prominent Choctaw family, three of whom had served as principal chiefs of the tribe. The county occupies the extreme southeastern corner of the state, sharing boundaries with Arkansas on the east and Texas on the south. It adjoins Le Flore County on the north and Pushmataha and Choctaw counties on the west. McCurtain County possesses a total land and water area of 1,901.32 square miles and is the third-largest county in the state. In 2010 the incorporated towns were Broken Bow, Garvin, Haworth, Idabel (the county seat), Millerton, Smithville, Valliant, and Wright City.

The county's topography is varied, extending from the rugged foothills of the Ouachita Mountains in the north to the fertile Coastal Plain region along the Red River, which forms the southern boundary. The land slopes generally downward from the northwest to the southeast. Four rivers provide drainage, flowing to the south and southeast: the Red, the Little, the Mountain Fork, and the Glover. The Little and Mountain Fork have been dammed to create two major reservoirs, which provide an abundance of water for both domestic and industrial use. The climate of McCurtain County is generally warm, moist, and subtropical, with mild winters and a growing season averaging about two hundred days. Precipitation averages about fifty inches per year.

Archaeologists have focused on the Caddoan and their ancestors in this region. These groups settled along the streams of southeastern Oklahoma over a period of thousands of years. Several locations reflect this work, and three are listed in the National Register of Historic Places. These are the Pine Creek Mound Group (NR 74002194), the Harkey Number Three Archaeological Site (NR 78003084), and the Grobin Davis Mound Group (NR 84002637). At the beginning of the twenty-first century eight Paleo-Indian (prior to 6000 B.C.), 186 Archaic (6000 B.C. to A.D. 1), 54 Woodland (A.D. 1 to 1000), and 196 Plains Village (A.D. 1000 to 1500) period sites had been identified in the county.

The area now occupied by McCurtain County has a varied history, having been a major part of old Miller County, Arkansas Territory, in the 1820s. It then became a significant part of the Choctaw Nation when that tribe was moved from Mississippi to Indian Territory in the 1800s. The Choctaws held sovereignty over the area until 1906, just prior to Oklahoma statehood.

When created, the county was sparsely settled, having a population of only 13,198 in 1907. There were no roads, as such, only wagon trails. Ferries provided means of crossing the major streams as there were no bridges. Choctaw tribe members had accepted allotment of land in severalty, and their homesteads were not taxable for twenty-one years, leading to financial problems in establishing county government. Prior to 1902 the county had no towns, in the usual sense of that term. Many small trading posts existed along the various trails, and each usually had a post office. When the Arkansas and Choctaw Railway (later the St. Louis and San Francisco Railway) was built across the area in 1902, the towns of Valliant, Garvin, Purnell (later Idabel), and Harrington (later Haworth) were surveyed and platted. The Choctaw Lumber Company later established Wright City (initially Bismark) and Broken Bow. The Miller Lumber Company surveyed and platted Millerton.

The land was surveyed into sections and townships in the late 1890s to facilitate allotment to the Choctaws in severalty. Section line roads were slowly opened, but it was a decade after statehood before any modern roads were built. The Bankhead Highway, later to become U.S. 70, was built in the 1920s across the county from east to west. The Williams Highway, stretching from Broken Bow to the northern part of the county, was constructed at the time of World War I and subsequently became part of U.S. Highway 259. State Highways 3, 37, and 87 serve the southern part of the county; State Highway 4, the northern section; State Highway 98, the western area.

The Arkansas and Choctaw Railway (later the St. Louis and San Francisco Railway) was built across the county in 1902. Between 1910 and 1921 the Choctaw Lumber Company laid tracks for the Texas, Oklahoma and Eastern Railroad to serve its interests from Valliant to De Queen, Arkansas. These roads still served the area at the beginning of the twenty-first century.

Forty percent of the land area is arable and suitable for agriculture. Farming and forestry have dominated the county economy. Much of the land originally contained dense forests of hard and soft woods, which were harvested and processed within two decades after statehood. A large portion of the cleared land was then devoted to subsistence-type, family-operated farms, with cotton as the chief money crop. Depletion of fertility and the collapse of the cotton market during the Great Depression gradually eliminated cotton production. In 1997, 1,573 farms involved 327,524 acres in cultivation.

Beef cattle production has been a significant activity from the earliest years of the county's history. Cattle raising increased rapidly during the last half of the twentieth century as much of the former cropland was converted to improved pastures and forage production. Poultry and swine enterprises also gradually became an important part of the economic framework. The fertile lands in the Red River Valley were also diverted from cotton production to the growing of grains and forage.

A major portion of the cutover forest lands have been restored by natural reseeding and active planting of pine trees. Several thousand acres of the restored pine forests are now part of the Ouachita National Forest. Private entrepreneurs have also acquired and developed large acreages of the forests. The timber industry remains an important factor in the county's economic mix. Vast deposits of limestone, sand, and gravel exist in the area and are utilized extensively for road construction and other uses.

The following (as per The Chicago Manual of Style, 17th edition) is the preferred citation for articles:
Louis Coleman, “McCurtain County,” The Encyclopedia of Oklahoma History and Culture, https://www.okhistory.org/publications/enc/entry?entry=MC017.