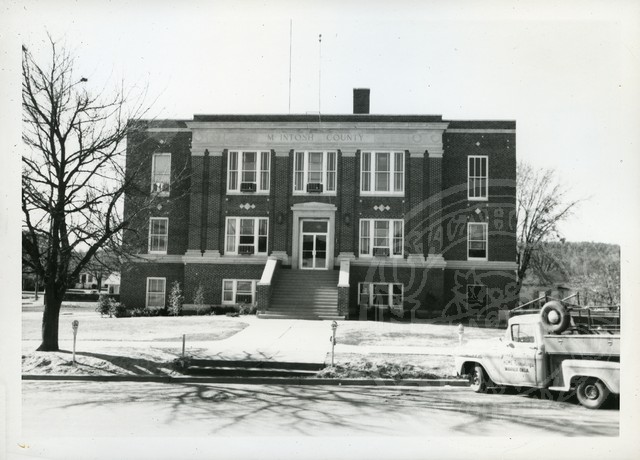 Located in eastern Oklahoma, McIntosh County is surrounded by Okmulgee County on the north and west, Okfuskee and Hughes counties on the west, Muskogee County on the north and east, and Haskell and Pittsburg counties on the south. Named for the influential Creek family of McIntoshes, the county encompasses 712.48 square miles of land and water. Because of the convergence of three rivers, the Deep Fork, North Canadian, and Canadian, the area has a long history of human occupation. In 1964 the U.S. Army Corps of Engineers completed Eufaula Dam, creating Lake Eufaula. As Oklahoma's largest-surface area lake, it dominates McIntosh County's landscape. At 1907 statehood, when the county was established, its population stood at 17,975. The county annexed part of Hughes County in 1915 but lost land to Okmulgee County in 1918. In 2010 the county's six incorporated towns were Checotah, Eufaula (the county seat), Hanna, Hitchita, Rentiesville, and Stidham.

The county contains more than ninety-two square miles of water area, more than any other Oklahoma county, and with just under 13 percent of its total land under water, McIntosh County is second only to Marshall County's 13.08 percent. The creation of Lake Eufaula submerged a large amount of bottomland that had provided fertile fields. Much of the remaining surface land comprises sandstone hills, often covered in timber.

A majority of the county's archaeological sites date to the Archaic Period (6000 B.C. to A.D. 1), although in 2003 there were six sites predating that period. The Handprint Site contains petroglyphs, which were probably produced by precontact American Indians. Because of the rivers, early explorers and traders often trekked through the present county, including Jean Baptiste Bénard de La Harpe, André Fabry de la Bruyere, Stephen Long, Josiah Gregg, and Nathan Boone. The Texas Road cut through McIntosh County, establishing a route for the U.S. Army and early travelers to Texas.

The present county was part of the Eufaula District of the Creek Nation. In 1825 the Lower Creeks, many of whom were mixed-blood citizens led by William McIntosh, agreed to a treaty exchanging the tribe's land in Georgia for territory in present Oklahoma. Most of McIntosh County belonged to the Creek, except for the southeastern corner, which was held by the Cherokee. After the Creek people's harsh experiences on the Trail of Tears, they repeatedly clashed with the Osage in the new area. In 1836 Creeks established North Fork Town, an important tribal center on the Texas Road two miles east of present Eufaula. From 1853 until 1886 the U.S. Post Office Department operated a post office designated as Micco at North Fork Town. In 1848 the Methodist Church established the Asbury Manual Training School for Creek children; it closed briefly during the Civil War. Several years after the building burned in 1889, the students transferred to the new Eufaula Boarding School for Girls at Eufaula.

At the beginning of the Civil War Confederate representative Albert Pike signed treaties with the Chickasaw, Choctaw, and Creek nations at North Fork Town. For a short time Confederate Col. Douglas Cooper located his headquarters near Fisher's Store, which had been established around 1847 northeast of present Eufaula. The Battle of Honey Springs occurred near Rentiesville on July 17, 1863, and was the largest Civil War engagement in present Oklahoma. The Union victory allowed the Federal army to control Indian Territory north of the Arkansas River.

In 1871–72 the Missouri, Kansas and Texas Railway built tracks through the area, establishing Checotah and Eufaula. The line followed the Texas Road, as did the later Jefferson Highway, which became U.S. Highway 69. In 1903 the Fort Smith and Western Railroad Company constructed a railway through the southwestern corner of the county, running through Hanna. Railroad service ended in 1939. In 1904–05 the Missouri, Oklahoma and Gulf Railway laid tracks in McIntosh County's northwestern portion, and the town of Hitchita developed. U.S Highway 266 crosses the county's northern portion from east and west, meeting U.S. Highway 69 in Checotah. Interstate 40 also runs east and west and intersects U.S. 69 south of Checotah. State Highway 9, another east-west road, crosses U.S. 69 at Eufaula. The Indian Nation Turnpike and State Highways 52 and 72 join U.S. 69 as north-south highways.

The county developed some of its mineral resources, including oil and gas production, limestone, sand, and gravel. Although Oklahoma's most productive coal counties surround McIntosh County, because of high ash and sulfur content little of its coal was mined in the early twentieth century. Between 1978 and 1990 companies strip-mined 3.2 million tons of a low-sulfur Secor coal that was discovered in McIntosh and Wagoner counties. A boon to the economy came with the 1964 completion of Lake Eufaula for flood control, water supply, and hydroelectric power. After that time tourism increased, bringing in outside dollars, and created companion industries such as boat manufacturing and retail sales.

A number of county properties are listed in the National Register of Historic Places, including the Honey Springs Battlefield (NR 70000848), Slippery Moss Shelter (NR 78003085), Johnson Lake Shelters (NR 78003086), and the First Soil Conservation District Dedication Site (NR 82003689) near Eufaula. There are six National Register sites in Checotah and five in Eufaula. Vernon, one of the county's two remaining All-Black towns (Rentiesville is the other), has the Rock Front (also known as the Vernon Post Office, NR 84003152) listed in the National Register of Historic Places.

The following (as per The Chicago Manual of Style, 17th edition) is the preferred citation for articles:
Larry O'Dell, “McIntosh County,” The Encyclopedia of Oklahoma History and Culture, https://www.okhistory.org/publications/enc/entry?entry=MC028.