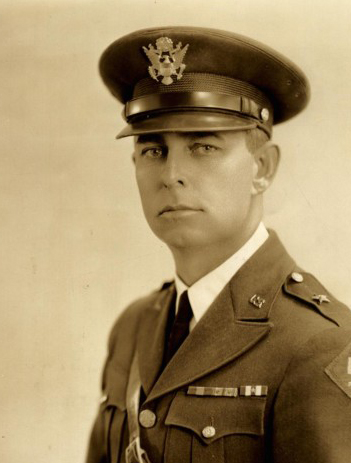 Oklahoma City entrepreneur, civic leader, and soldier Raymond S. McLain became one of the great combat commanders of World War II. Born on April 4, 1890, in Washington County, Kentucky, McLain completed formal schooling in the sixth grade. He read extensively and furthered his education through self-study, becoming proficient in mathematics and languages. At seventeen he moved to Oklahoma City and handled titles and abstracts for a real estate company before opening his own business.

Initially activated in June 1916 with the Oklahoma National Guard for duty on the Mexican border, McLain fought in France during World War I. Returning to civilian life in 1919, he managed Oklahoma City's Central Title and Investment Company and continued his service in the National Guard.

After the Forty-fifth Infantry Division was organized in 1923, McLain served in command and staff positions concerned with readiness issues. Through his efforts the Forty-fifth became the best-trained National Guard division in the nation. Mobilized with the division in 1940, he was decorated for valor during World War II. His personal courage, organizational ability, and hands-on leadership led to an assignment as commander of the XIX Corps, which played a key role in the defeat of Nazi Germany.

After World War II McLain remained on active duty, eventually attaining the rank of lieutenant general. He was selected as the first statutory comptroller general of the U.S. Army in 1950, and he held that position until his retirement in 1952. He died on December 14, 1954, in Washington, D.C.

The following (as per The Chicago Manual of Style, 17th edition) is the preferred citation for articles:
David L. Frazier, “McLain, Raymond Stallings,” The Encyclopedia of Oklahoma History and Culture, https://www.okhistory.org/publications/enc/entry.php?entry=MC033.