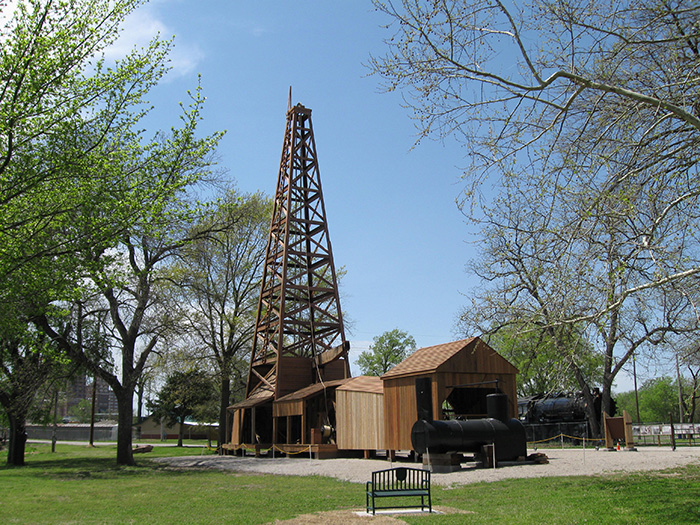 April 1897 marked the beginning of Oklahoma's petroleum industry when the first commercial oil well was drilled in Indian Territory (I.T.). George B. Keeler, who had come to I.T. in 1871 to work at Chouteau's trading post near the Osage Indian Agency, noticed oil seeping from the ground on the south bank of the Caney River near Bartlesville in 1875. After Keeler and William Johnstone opened a trading post on the south bank, they decided to have a well drilled to boost economic conditions in the area. They and another early settler, Frank Overlees, obtained a lease from the Cherokee Nation and hired the Cudahy Oil Company to drill the well.

On April 15, 1897, spectators watched Keeler's stepdaughter, Jennie Cass, drop a go-devil (torpedo) down the shaft to set off a nitroglycerin charge. Drilled to 1,320 feet and named for Johnstone's daughter, the well was capped until 1899 when the Kansas, Oklahoma Central and Southwestern Railway (later the Atchison, Topeka and Santa Fe Railway) was built and provided the means to ship the oil to outside markets. The well produced more than one hundred thousand barrels of crude oil before it was plugged in 1948. The success of the Nellie Johnstone stimulated exploration and drilling on the nearby Osage lands. In addition, brothers Frank and L. E. (Lee Eldas) Phillips, attracted by the oil boom, moved from Iowa to Bartlesville in 1904 and established Phillips Petroleum Company.

Nellie Johnstone Cannon, a descendant of Delaware Chief Charles Journeycake, was allotted the land on which the well was dug. In 1917 she sold the land to the city of Bartlesville, and a redwood replica of the derrick was built in Johnstone Park.

The following (as per The Chicago Manual of Style, 17th edition) is the preferred citation for articles:
Linda D. Wilson, “Nellie Johnstone Number One,” The Encyclopedia of Oklahoma History and Culture, https://www.okhistory.org/publications/enc/entry.php?entry=NE003.