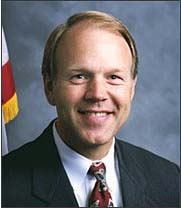 Oklahoma's U.S. senator from 1981 through 2004, Donald Lee Nickles was born in Ponca City, Oklahoma, on December 6, 1948, to Robert and Coeweene Nickles. His grandfather, Clair A. Nickles, had founded an automotive repair shop in Ponca City in 1918, and under family management the enterprise grew to be Nickles Machine Corporation, now Nickles Industrial Manufacturing Corporation. The company made replacement parts for gas and diesel engines. Donald Nickles attended public schools of Ponca City and worked his way through Oklahoma State University by running his own janitorial service. He graduated in 1971 with a degree in business administration, and afterward he joined the family business and became vice president and general manager. He served in the National Guard from 1970 through 1976. Nickles and his wife, the former Linda Lou Morrison, also a Ponca City native, have four children.

In 1978 Nickles decided to enter politics. A Republican, he ran for the Oklahoma Senate District 20 seat in 1978, defeating Kay County treasurer John Heinze of Ponca City. Nickles served in the Oklahoma Senate from 1979 through 1980. After two years he resigned on November 17, 1980, to run for the U.S. Senate seat being vacated by Henry Bellmon, who had decided to temporarily retire from politics. Although a newcomer to national politics, Nickles won the Republican nomination by a landslide. In the general election his Democratic opponent was Andy Coats, a former Oklahoma City mayor. Nickles was elected by a wide margin. At age thirty-one, he was the youngest Republican ever elected to the upper house. Reelected three more times, he defeated former U.S. Rep. James R. Jones in 1986, Oklahoma House Speaker Steve Lewis in 1992, and Don E. Carroll of Tahlequah in 1998, drawing 66 percent of the vote in that year. He became the first Oklahoman ever elected to a fourth term.

Senator Nickles rose through the ranks to chair the National Republican Senatorial Committee from 1989 through 1991. He also chaired the Republican Policy Committee from 1991 to 1996. In 2003 he became chair of the Budget Committee, the first Oklahoman to lead that body. He also sat on the Senate Finance Committee, the Energy and Natural Resources Committee, and the Rules and Administration Committee. In 1996 he was elected Republican majority whip, the second-ranking party member in that chamber. It was the highest Senate leadership position ever held by an Oklahoman, and he retained the post through 2003.

Throughout his Senate career Nickles worked to establish a balanced federal budget and reduce federal regulation. He led a movement to reform the Internal Revenue Service and was instrumental in securing the Congressional Accountability Act of 1995, legislation making senators and representatives accountable under the public laws. He introduced the bills that became the National Maximum Speed Limit Repeal Act, the American Family Tax Relief Act of 1995, the Defense of Marriage Act, the International Religious Freedom Act of 1998 (coauthored with Sen. Joseph Lieberman), and the Child Citizenship Act of 2000, providing automatic U.S. citizenship to foreign-born children adopted by a citizen parent. He also wrote the 1988 legislation creating Winding Stair National Recreation and Wilderness Area in southeastern Oklahoma, co-authored the bill to establish the Oklahoma City Bombing Memorial, and facilitated the authorization of a new veterans' cemetery at Fort Sill. Nickles retired to private business in January 2005.

The following (as per The Chicago Manual of Style, 17th edition) is the preferred citation for articles:
Dianna Everett, “Nickles, Donald Lee,” The Encyclopedia of Oklahoma History and Culture, https://www.okhistory.org/publications/enc/entry.php?entry=NI005.