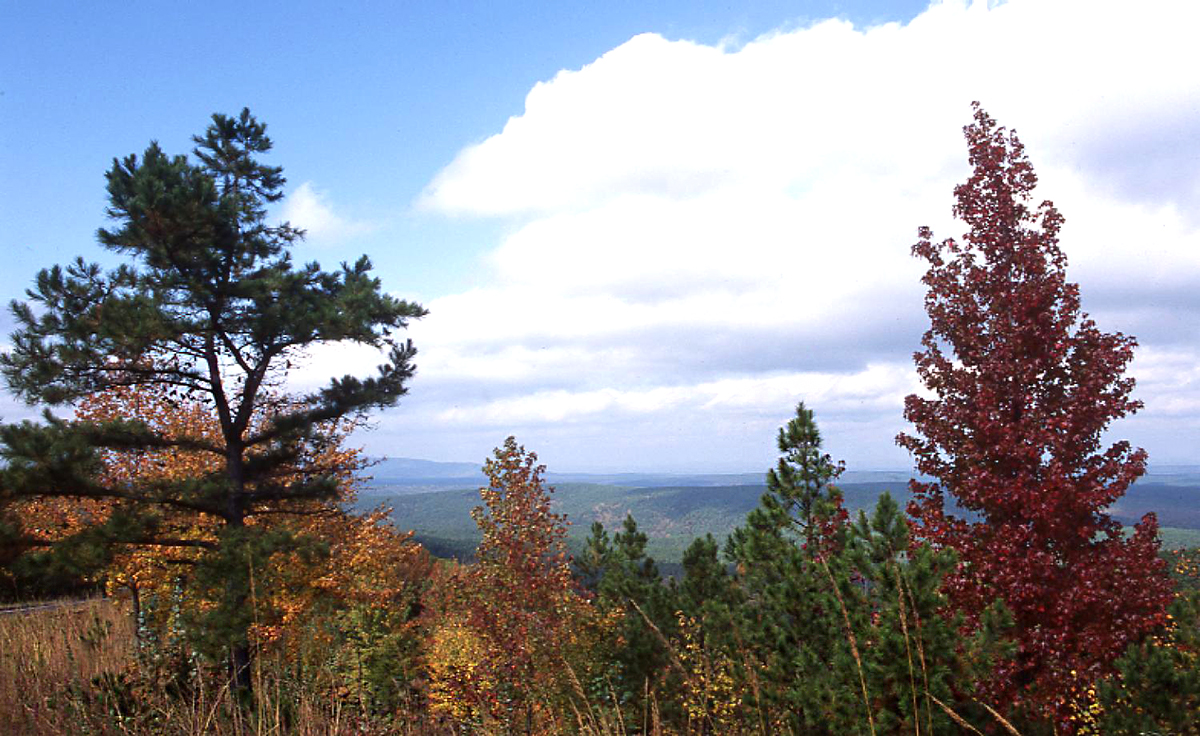 American Indians, especially the Caddo and their ancestors, first occupied the rugged and picturesque region. European explorers came to the area in 1540s with the Spanish Hernando De Soto expedition followed by the French in the 1670s. In 1686, beginning with the Arkansas Post (in present Arkansas), Europeans settled in the area and documented the forest growth. In 1879, with the westward expansion of railroads, commercial logging began in the region. After the forest's widespread depletion, in 1891 Congress enacted the Forest Reserve Act. Pres. Theodore Roosevelt created the Arkansas portion of the Ouachita National Forest on December 18, 1907. The 1911 Weeks Law allowed for additional purchase of forest lands that enabled the government to acquire the Oklahoma segment from Choctaw lands.

On April 29, 1926, Pres. Calvin Coolidge officially designated the entire expanse the Ouachita National Forest. Additional Oklahoma lands were obtained in 1930, extending the forest in Le Flore County. In the 1930s the Civilian Conservation Corps (CCC) held sixteen camps in the forest, three in Oklahoma that established roads and game sanctuaries. World War II halted many of the forest production projects, but the 1960s brought tourism to the area. The Talimena Scenic Byway (completed in 1969 and dedicated in 1970), connecting Talihena, Oklahoma, to Mena, Arkansas, was built for its view.

The Ouachita National Forest is made up of a pine-hickory mix, much of which is new growth as logging continued with the Weyerhaeuser Company. However, six parts of the forest have been declared wilderness areas. There is also more than seven hundred miles of trails for hiking and mountain biking, thirty-five developed recreation areas, seven scenic areas, forty-three vistas, two historical sites, and a national recreation area. There are more than four thousand miles of stream and sixteen hundred acres of lakes and ponds for fishing and boating. In the Oklahoma section, the 26,445-acre Winding Stair National Recreation Area provides additional space for camping, hiking, and equestrian and off-road events.

James D. Morrison, "Problems in the Development and Industrial Progress of the Choctaw Nation, 1865–1907," The Chronicles of Oklahoma 32 (Spring 1954).

Steven Strausberg and Walter A. Hough, The Ouachita and Ozark–St. Francis National Forest: A History of the Lands and the USDA Forest Service Tenure (Washington, D.C.: GPO, 1997).

The following (as per The Chicago Manual of Style, 17th edition) is the preferred citation for articles:
Dana Jackson, “Ouachita National Forest,” The Encyclopedia of Oklahoma History and Culture, https://www.okhistory.org/publications/enc/entry.php?entry=OU002.