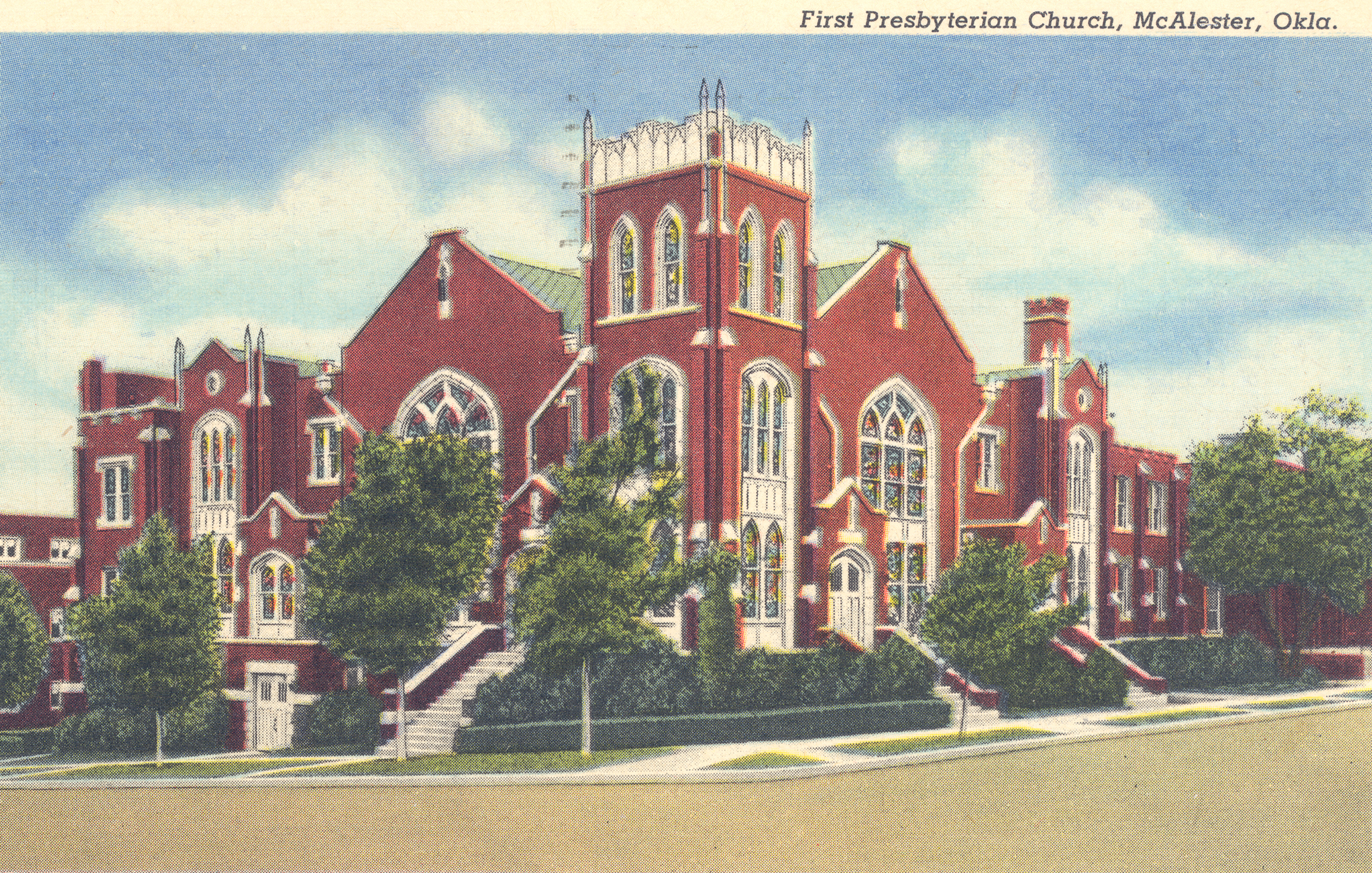 The Presbyterian Church has maintained a presence in Oklahoma for more than 180 years. Beginning in the early 1800s the church developed foreign missions and evangelistic enterprises with Native tribes that were located in the southeastern United States. Most of this work was conducted under the auspices of the American Board of Commissioners of Foreign Missions (ABCFM), an organization composed of both Congregationalists and Presbyterians.

The first organized missionary effort in the region that is now Oklahoma was Union Mission, a project of the United Foreign Mission Society, which included Presbyterians. Organized by Rev. Epaphras Chapman for the Osage Indians in 1820, Union was built in Mayes County. There, some years later, Rev. Samuel Worcester established the first printing press, on which the first published work, entitled The Child's Book, was printed in 1835.

In 1829 Rev. Cephas Washburn, a Congregationalist in the ABCFM, moved Dwight Mission into the Cherokee Nation to a place near present Marble Falls and Vian in Sequoyah County. Dwight had been originally established in 1821 by Washburn for the Cherokee near Russellville in Arkansas Territory. Dwight served as a mission and school until the Civil War. In the twentieth century the Presbyterian Church USA Board of Missions revitalized the facility as a Presbyterian day school for Indian students and later as a youth camp.

In 1831 the federal government began the first of several forced removals of Native peoples. These "relocation" efforts caused much suffering among the tribes and also among those men and women missionaries who chose to accompany their flocks to Indian Territory. The Choctaw were the first of the Southeastern tribes to endure what has been called the Trail of Tears. Over the 1830s the Creek (Muscogees), Chickasaw, Seminole, and Cherokee were removed west of the Mississippi River. The first true church of the Presbyterian denomination in Indian Territory was Wheelock, established by Rev. Alfred Wright and Harriet Wright for the Choctaw in 1832. Located near present Swink, the church closed in 1993 after 161 years of service. The Wrights' educational institutions were sanctioned by the Choctaw Nation's government for several decades.

Throughout the years leading up to the American Civil War, the Presbyterian Church continued to provide learned men and women to serve in Indian Territory. During this period the Indian Presbytery was formed in 1840, and it continued under the auspices of the Northern branch of the Presbyterian Church until 1940. New missions established between 1836 and 1861 included Stockbridge, Goodwater, and Spencer Academy in the Choctaw Nation, Coweta and Tullahassee in the Creek Nation, and Wapanucka (or Rock Academy) and Burney Institute for the Chickasaws. In 1848 Rev. Cyrus Kingsbury, a missionary who was revered by the Choctaw people, began a new out-station called Goodland, near present Hugo, Oklahoma. By 1850 Rev. Oliver P. Stark and his wife had firmly established the station as a mission. After the Civil War Goodland served as an orphanage and at the end of the twentieth century continued as a Children's Home, the oldest continuously operated institution in Oklahoma. By 1851 Reverend Samuel Worcester, formerly of Dwight Mission, dedicated a new church building at Park Hill, in the Cherokee Nation. He died in 1859 and was buried at Park Hill Cemetery near Tahlequah.

The Presbyterian missions educated Indian leaders. For example, in the 1840s a young Choctaw named Killihote, who was being educated at Pine Ridge Mission near Doaksville, was sent to Delaware College at Newark, New Jersey, to further his education and then to Union College, earning a bachelor's degree in 1852. That same year he entered Union Theological Seminary in New York City. By 1855 Killihote had been given the anglicized name Allen Wright. Graduating from the seminary, he was the first Indian student to receive a degree. He became an ordained Presbyterian minister and returned to the Choctaw Nation to begin his ministry. In 1860 he served as moderator of the Indian Presbytery. He was elected to offices in the nation, holding several positions, including principal chief.

The Civil War divided not only a nation, but also the loyalties of those who served in the mission field. In 1861 the Presbyterian Church split into the northern and southern branches. This was a troubled time for many of the men and women who had served the church among the tribes. Men like Kingsbury, Byington, Hotchkin, and Stark submitted their resignations to the ABCFM when the parent organization insisted that they work for the abolition of slavery. Others left the territory, causing many schools and missions to close for the duration of the war. By wars' end, many of the prominent missionaries who had come with the Five Tribes had either left or were in the twilight years of life's work. In 1868 Cyrus Byington died, as did Reverend Kingsbury in 1870. The work of these men and of those who followed created the foundation for the church in the twentieth century.

Several new developments of the postwar era significantly impacted the Presbyterian Church in Indian Territory and future Oklahoma. Educational institutions continued to expand. One in particular evolved into the University of Tulsa, one of the state's major higher education facilities. In 1882 a Presbyterian School for girls was established at Three Forks (Muskogee), and by 1894 the school had been renamed Henry Kendall College. In 1907 J. M. Hall and other Tulsa Presbyterians pledged an endowment of twenty acres and $100,000 so that the college could relocate in Tulsa. By 1920 the school had been renamed the University of Tulsa.

Events of the allotment era also affected the church's activities in Indian Territory and its relationship to Indian peoples. By the 1890s the sovereign nations of the Five Tribes were under pressure by the federal government to dissolve their governments, take up individual allotments, and open their lands to settlement by non-Indians. As a result, Congress created the Dawes Commission in 1893 to negotiate toward that purpose. However, it would take another six years before the commission, strengthened by the 1898 Curtis Act, had a precise deadline to reach agreements with each of the five tribes. With change approaching, by 1898 the Presbyterian denomination's Board of Home Missions shifted its focus from western expansion through evangelism to finding solutions for urban problems.

In the early 1900s there was a chronic shortage of qualified ministers or evangelists to meet the needs of a rapidly growing population. In many towns Sabbath School missionaries filled the gap until an installed pastor could be called. Between 1916 and 1924 many new congregations were formed across the state. With the creation of Oklahoma Synod in 1908, the southern church established three presbyteries, Durant, Indian, and Washita. It is interesting to note that the first session of synod emphasized the evangelization of African Americans.

As the church continued to grow, new demands involving social concerns in the community, state, and region took center stage. Race relations were a major concern, but the denomination's written records do not include any mention of the passage of Jim Crow laws after statehood. Moreover, the church professed absolutely no indignation over the racially motivated mob violence and bloodshed that occurred in Tulsa in June 1921. In the one notable exception, members of the First Presbyterian Church of Tulsa put their faith and lives in danger from the onset of the riot by shielding several African American families until the violence subsided. No mention is made in the minutes of the PCUSA or PCUS of any action taken to alleviate the suffering of those affected by the riot.

Race relations remained dormant in Presbyterian affairs until 1948. In that year the University of Oklahoma, after a court battle, admitted its first black student. Minutes of the Synod for 1949 noted that milestone. The church also stated that "we reaffirm our desire . . . that the presence of segregated synods and presbyteries . . . is not in accord with Christian principles we profess." Not until the 1960s was any real effort made to achieve integration among the congregations in the state. Most notable was the combining of Creston Hills and Bethany Presbyterian Churches in Oklahoma City into a fully integrated congregation as Trinity Presbyterian Church. The social ills of the 1960s spurred new efforts by the church to address issues such as divorce, drug abuse, child abuse, abortion, human rights, sexual orientation, and war. At the beginning of the twenty-first century those issues still commanded the attention of the local and national church.

In 1982, after a separation of over 120 years, the PCUSA and PCUS reunited to become one, healing old wounds left as a reminder of the Civil War. The Presbyterian Church in Oklahoma had begun the twentieth century with high expectations for service and commitment. For much of that period, those challenges were achieved. Yet, as that century ended and a new one began, the church had declined in the number of communities served and the number of members. In 2004 there were fewer than thirty-five thousand communicant members across the state. Of the three presbyteries in Oklahoma, Cimarron had only fourteen churches spread out from Guthrie to Ponca City west to Guymon. The Indian Nations Presbytery had fifty-eight congregations with approximately twelve thousand members within boundaries that included Oklahoma City, Ardmore, and Lawton, and west to the Texas border. The bedrock of Presbyterianism remained the Eastern Oklahoma Presbytery, which had begun the work of the church more than 180 years ago. In 2004 it comprised seventy-nine churches with approximately fifteen thousand members.

William D. Welge, "Presbyterianism in Oklahoma During the Twentieth Century," Proceedings of the Twenty-Third Annual Meeting of the Presbyterian Historical Society of the Southwest (March 2000).

William D. Welge, "An Overview of the Ministry of Presbyterians with Native Americans in Oklahoma," Proceedings of the Twenty-Sixth Annual Meeting of the Presbyterian Historical Society of the Southwest (March 2003).

The following (as per The Chicago Manual of Style, 17th edition) is the preferred citation for articles:
William D. Welge, “Presbyterians,” The Encyclopedia of Oklahoma History and Culture, https://www.okhistory.org/publications/enc/entry.php?entry=PR009.