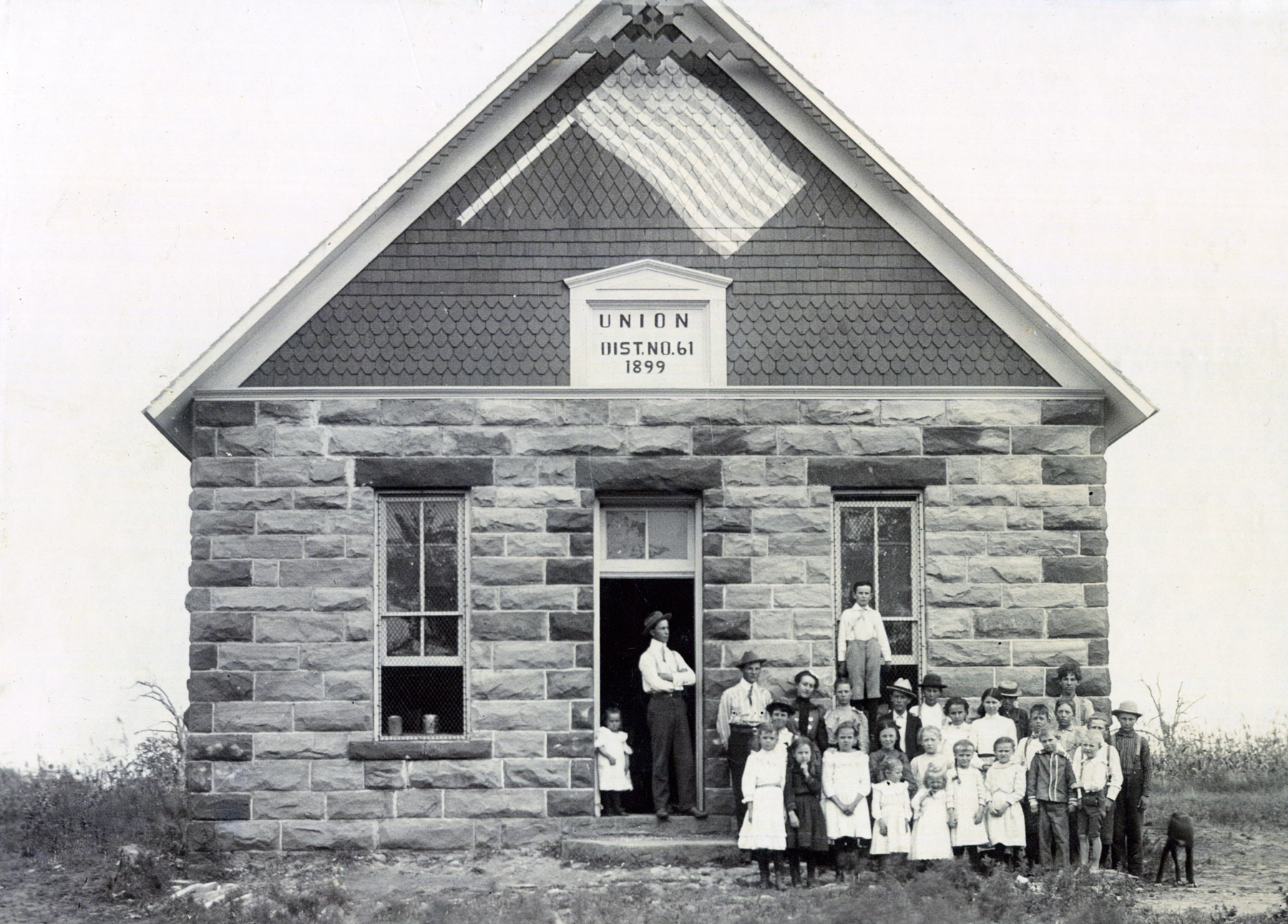 Public education, as it is known today in the United States, originated in the 1830s with the American Common School Movement, led by educator Horace Mann, secretary of the Massachusetts State Board of Education. He conceived and institutionalized the idea of free, public, nonsectarian or "common schools" for children. Bringing together pupils of all cultural and ethnic backgrounds, the mission of the common school was to inculcate the ideas of democracy, civic responsibility, and Americanization in children and their parents, especially if they were immigrants. Mann advocated higher standards for teacher certification, better school buildings and facilities for all communities, and standardization of the curriculum and the learning environment.

By the time the Oklahoma Territory (O.T.) period began (1890) and the time the Indian nations and reservations were ending (by 1906), schools of various kinds, including subscription schools, mission schools, and schools maintained by the Indian Nations in the east and on reservation schools in the west, offered opportunity. In 1891 Oklahoma Territory, with 61,832 persons, had an estimated scholastic population of 21,335 in school, virtually all in rural areas. By 1901 the numbers had grown, with a population of 398,311 including 145,843 school-age children, only 116,971 of whom had access to a school unless they lived in a municipal area. Rural children remained largely without educational facilities. Ungraded, one-room, one-teacher "subscription" schools were the norm, often funded entirely by the pupils' parents.

In 1908 Rev. E. D. Cameron, the state's first superintendent of public instruction, summarized the status of education from 1890 to 1907. He noted that "the rural district school is the foundation. . . . thousands of our citizens will never go to any other school, and if there should be no district school in reach of them they may never go to any school at all. . . . We will have enrolled this scholastic year not less than 140,000 children who never entered a public schoolhouse before and a vast majority of whom never attended a school of any kind a single day. It is the duty of the State to make these schools so strong that they will at least give a glimpse of real education and create a thirst for learning that will carry the student up and through life."

Common schools developed in Oklahoma after the Oklahoma Constitution of 1907 mandated a free, public education for all children. Most school districts were "dependent," governed by a county superintendent of schools ("independent" districts were those in incorporated municipalities) and had only one rural common school. During the first decade of statehood the common school offered only grades one through eight (African American students attended separate schools). Superintendent Cameron reported a total of 5,641 districts in the new state; in 1908 in former Indian Territory (I.T.) 2,200 districts served approximately 250,000 students (the general population was 708,000). In former Oklahoma Territory, 3,441 school districts served an approximate 240,000 students (of a general population of 705,000).

In the early statehood years most districts still had only a single eight-grade common school, often with only one room and one teacher. A two-room, two-teacher school was unusual. Because school buildings cost money to maintain and would be empty when classes were not in session, the state mandated a "larger use." It included weekend adult education such as literary and scientific lectures, political meetings, voting in elections, farm and home demonstration projects, and other social purposes. This encouraged community involvement with the school building and promoted public support for maintenance. The number of school districts continued to grow as population spread into former Indian nation lands in all parts of the state. The number of districts seems to have peaked during World War I in 1918 at 5,783, and most still had only one school building.

School consolidation has always been controversial in Oklahoma as elsewhere, but it has proceeded uninterrupted since before statehood. Massachusetts passed the first consolidation law in 1867; in Oklahoma, schools began to consolidate as early as 1903 in various places. Historically, the State Superintendent of Public Instruction generally sought consolidation to improve the quality of buildings, curricula, student interaction, adult education, and also county roads, because students must be transported. The General School Laws of 1913 defined the types of districts that could be set up and addressed curricula, mandating that "in each and every school district there shall be taught: agriculture, orthography, reading, penmanship, English, grammar, physiology and hygiene, geography, U.S. history and civics, arithmetic, and other such branches as may be determined by the State Board of Education."

Beginning in the 1910s the Progressive Movement's educational philosophy was implemented in Oklahoma and other parts of the nation. With the United States Department of Education in the lead, state education departments began to set up a "Model School program," by which the state could evaluate and improve rural education. County superintendents assessed such elements as sanitation, comfort, aesthetics of schoolyards, school equipment, teacher training, and so forth.

Consistent with a national trend of consolidation that paralleled a national rural-to-urban population shift, in the years after World War I many districts consolidated in one building, and other districts became "union graded," (uniting two or more districts and providing two buildings, one for elementary grades one through six and one for grades seven through twelve.) Once again, the goal was to raise standards for facilities, curricula, and teacher certification. In 1923 the Oklahoma Legislature enacted a tax levy to pay each common school a fee per child, if a district was too poor to provide the necessary elements of a Model School. In 1925 a Standard Building Law mandated the physical standards for schoolhouses.

Under the guidance of Haskell Pruett, a Lawton educator and director of the Division of Schoolhouse Planning, the Oklahoma State Department of Education began to implement state-mandated standards for buildings, and teacher training and certification standards and curricula were improved. Facilities upgrades included such mundane items as bookcases, lunch cupboards, first-aid cabinets, drinking fountains, toilets, playground equipment, "storm caves," teachers' homes, gymnasia, outhouses, septic tanks, and water supply. Plans were also available for additions to existing buildings. In three years between 1925 and 1927 Pruett provided 607 sets of plans requested by school districts, and Model Schools began to appear all around the state. Plans existed for one-, two-, three-, and four-room schools, with some funding available, thereby impelling the decline of the eight-grade, one-room, one-teacher school district and promoting consolidation.

Population movement began to increase in Oklahoma during the years of the Great Depression. In the 1930s the federal government's Works Progress Administration provided funding and unskilled workers for school construction, remodeling, and expansion, a process that encouraged school consolidation. By 1940 there were 4,174 districts that maintained schools, of which 3,747 were rural county dependent. As World War II began, people moved from rural areas to towns and cities for employment in war-related industries, and more rural schools closed or consolidated. The trend continued when rural residents returned from war service. Various factors, including farm consolidation, federal funding for the construction of consolidated school buildings and facilities, and changing a public perception of the value of a high school education, combined to encourage school consolidation. An eighth-grade common school certificate became increasingly irrelevant.

The desired norm for Oklahomans became a high school education, leading to a college experience. In the 1950s and into the 1960s school consolidations increasingly abandoned the old-fashioned "common school" buildings in favor of union schools with a high school, and attrition continued through the next decades. In 1989, when the legislature passed the Voluntary School Consolidation Act, Oklahoma had 609 districts, rural (all grade levels) and urban combined. A consolidated district may be formed voluntarily (initiated by the residents of the districts) or be mandatory (directed by the State Department of Education).

By 2015 the number of school districts had been reduced to 521 by both mandatory and voluntary consolidation, and only half of the state's approximately 1,800 schools were rural. Within that number, the six- or eight-grade rural elementary school, once known as the common school, continues to exist in Oklahoma in relatively isolated rural areas where there is a tenacious resistance to school consolidation and aversion to busing of students. In 2003 there were a reported 115 rural elementary schools (K–6 or K–8) scattered throughout the state, and in 2016–17 there were 96. They were represented by the Organization of Rural Elementary Schools (ORES).

William A. Fischel, "Neither 'Creatures of the State' nor 'Accidents of Geography': The Creation of American Public School Districts in the Twentieth Century," www.chicagounbound.chicago.edu, accessed 6 September 2017.

The following (as per The Chicago Manual of Style, 17th edition) is the preferred citation for articles:
Dianna Everett, “Schools, Common,” The Encyclopedia of Oklahoma History and Culture, https://www.okhistory.org/publications/enc/entry.php?entry=SC014.