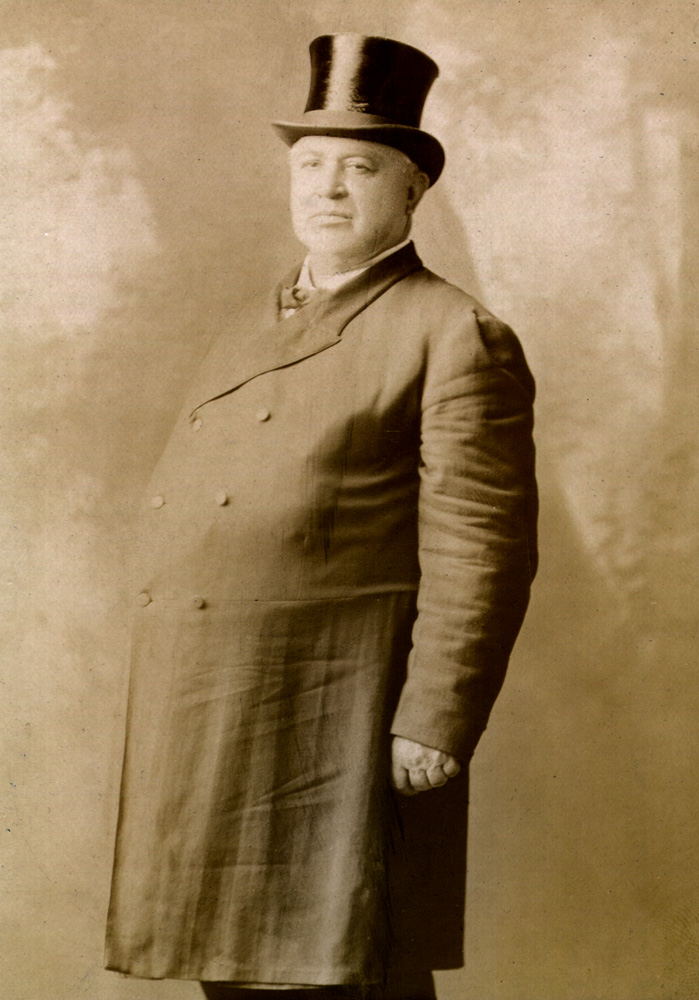 A leading advocate in "the good roads movement" and a pioneer newspaperman, Sidney Suggs transplanted to Oklahoma from Texas in 1895. Born near Tupelo, Mississippi, on January 15, 1853, he moved with his parents, Dr. Isaac and Jane Fullwood Suggs, to East Texas when he was fourteen. After working for a Dallas machinery business for fifteen years, Sidney Suggs joined his brother Hugh in Berwyn, Indian Territory (now Gene Autry, Oklahoma), and they operated a cotton gin, mill, and lumberyard. They expanded to Springer, opened another gin, and added ranching enterprises. In 1876 Sidney Suggs had married Dixie Barnhart, and they had six children before she died in 1891. In 1892 he married Minnie Murray, who died that same year, and in 1895 he married Bell Olive.

In 1897 Suggs purchased the Ardmoreite newspaper and relocated to Ardmore. Historians claim that he brought the first linotype machine to Indian Territory and initiated the territory's first daily. At the 1903 Indian Territory Press Association's annual meeting the organization elected him president. He used his Ardmore paper to vigorously oppose separately admitting Indian Territory to the United States, joining many Oklahoma Territory politicians in proposing that the two territories form a single state.

Suggs had for some time adamantly advocated good roads, forming one of the first good roads organizations in Indian Territory. He mapped early American Indian trails in southern Oklahoma, with much of this survey later incorporated into U.S. Highway 70. The 1906 conference of the Oklahoma-Indian Territory Good Roads Association elected him president, renamed itself the Oklahoma Good Roads Association, and urged the members of the state's Constitutional Convention to create a department of highways. Although the convention did not add a highway department to the document, it did include a provision that directed the state legislature to create such a bureau. Suggs began touring Oklahoma speaking on behalf of good roads, and he also lobbied state representatives for the creation of a highway department. In 1910 Gov. Charles Haskell appointed him as the inspector of public roads, an unpaid position.

Suggs retired from active participation in the newspaper to concentrate on his transportation crusade, eventually selling it to an Ardmore company controlled by John Easley in 1917. In 1911 the legislature officially created the Oklahoma Highway Department, and Gov. Lee Cruce appointed Suggs as director. The statute failed to provide a method to collect the one-dollar-per-automobile tax that was to fund the new department. As a result, he implemented a system that allowed citizens to collect the tax and keep a portion as a fee, spawning the Oklahoma tag agency system that still existed at the dawn of the twenty-first century. Suggs's tenure as director lasted until 1915. The young Highway Commission helped insure the development of the north-south Meridian Postal Highway, which became U.S. Highway 77 and bisects the state. Sidney Suggs died on February 9, 1935, but three years prior to his death he was inducted into the Oklahoma Hall of Fame. Known as Colonel Sidney Suggs, he was active in the Ancient, Free and Accepted Masons and the Independent Order of Odd Fellows and was a member of the Presbyterian Church.

The following (as per The Chicago Manual of Style, 17th edition) is the preferred citation for articles:
Larry O'Dell, “Suggs, Sidney,” The Encyclopedia of Oklahoma History and Culture, https://www.okhistory.org/publications/enc/entry.php?entry=SU004.