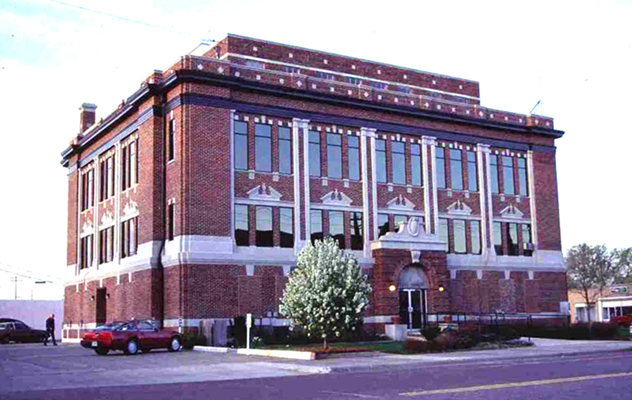 One of three Oklahoma Panhandle counties created at 1907 statehood from Beaver County (formerly the Public Land Strip), Texas County is the state's second largest, encompassing 2,048.82 square miles of land and water area. It is bounded by Cimarron County on the west, by Beaver on the east, and by the states of Kansas and Texas on the north and south, respectively. In the late 1880s the area was also included in the proposed Cimarron Territory. Since 1907 Guymon has been the seat of county government. In addition to Guymon, incorporated towns include Goodwell, Hardesty, Hooker, Optima, Texhoma, and Tyrone.

The county's topography, in the High Plains of the Great Plains physiographic region, is generally flat, with some rolling hills. The original vegetation comprised various short grasses, mostly bluestem and gramma. Arable sections are now farmlands, and the remainder generally serves as rangeland for grazing. Numerous playa lakes occur, intermittently holding water. These include, north of Guymon, Wild Horse Lake, the scene of the Hay Meadow Massacre, an infamous, four-victim murder of a Kansas posse in the 1880s. The county is drained by the North Canadian River, often called the Beaver River, and its tributaries, including Coldwater, Hackberry, Goff, Tepee, and Pony creeks. Along these waterways the region's few trees, including cottonwood, hackberry, willow, and elm, occur.

Archaeological sites give evidence of Paleo-Indian (six sites) use of the region and, before the arrival of Europeans, sites left by Archaic peoples (sixteen), Woodlands peoples (five), and Plains (Coalesced) Villagers (forty-four sites). The latter are people of the Antelope Creek culture, A.D. 1250 to 1400. For example, east of Optima is found the Stamper (or Optima) Site, a village that comprised twenty-eight single-room dwellings dating to around 1400. The Two Sisters Site and the McGrath Site also belong to this cultural assemblage, created by early farmers in areas near the Beaver (North Canadian) River.

In more recent times Texas County has been a transportation corridor. In the mid- and late nineteenth century various Plains Indian tribes traversed the region, including the Apache, Comanche, Kiowa, Cheyenne, and Arapaho. In the 1880s two cattle trails extended from Texas to Kansas, passing near Hardesty. Along one that wound its way from south to north, drovers took their herds from Hansford County, Texas, to Kansas. An east-west trail, called the Montana Trail or the National Trail, developed after the state of Kansas banned Texas cattle because they might carry fever ticks. The route left Camp (Fort) Supply and crossed the Public Land Strip, turning north into the southeastern corner of Colorado. In spring 1888, after creating the town of Liberal, Kansas, in March, the Chicago, Kansas and Nebraska Railway (soon controlled by the Chicago, Rock Island and Pacific system, CRI&P) constructed a line into the Public Land Strip. The railhead was built outside Kansas in order to facilitate the shipping of Texas herds. Therefore, loading pens were constructed at a rail head near present Tyrone, and watering facilities were set up a few miles distant at Shade's Well. The pens could accommodate eight thousand head, and the water troughs twice that many. These served ranchers in Beaver County and also trail herds arriving from Colorado, Texas, and New Mexico. Three years later the CRI&P extended its trackage southwest to Dalhart, Texas, and into eastern New Mexico, creating a continuous line from El Paso, Texas, to Chicago.

Before and after statehood, cattle raising was a significant economic activity in the Public Land Strip and later in the three counties. In the 1870s and 1880s cattlemen used the free-range federal lands and after the creation of Oklahoma Territory in 1890 leased much of it, including both common school and common school indemnity lands. By 1905, 181 lessees, most residing out of the territory, held school land leases for summer pasture. Among the ranches in this area of the Panhandle in the 1880s and 1890s was E. C. Dudley's Anchor D, headquartered in Liberal, Kansas. He ran as many as thirty thousand head on fifteen hundred sections. Oklahoma Territory–era post offices and rural communities denote other ranches, for example, Neff, near Hardesty, named for Boss Sebastian Neff, Eubank, named for Jesse Eubank, Eula, named for a daughter of George White, and Postle, named for George Postle. The Hardesty brothers conducted other significant cattle-raising operations on Coldwater Creek and on the Beaver River. Brothers James and Charles Hitch created a large ranch on the Texas border south of Guymon.

Farming's impact began slowly and in the 1890s. A land office opened for Beaver County, Oklahoma Territory, at Buffalo (near the center of present Texas County) on June 11, 1890, and homesteads were claimed during the next decade. Some were filed by ranch hands and given to their employers, but cowboys occasionally started small ranches themselves on a land claim. In 1900 the population of the present Texas County portion of Beaver County approximated one thousand, according to census manuscripts. Virtually everyone was still involved in stock raising, although some were laborers conducting "ranch farming" operations for cattlemen. The census even identified a few occupied as "cow boys." The arrival of the railroad in 1901 attracted many settlers, especially to the area around Sanford, soon renamed Guymon. By 1910 the population stood at 14,249.

Over the years four railroad lines have provided market access. When the aforementioned CRI&P line was extended in 1901, developers created the towns of Hooker, Optima, Guymon, Goodwell, and Texhoma. The Beaver, Meade and Englewood Railroad, chartered in 1912, began in 1915 to build west from Beaver County, reaching Hooker in 1926–27. As it completed construction to Keyes, in Cimarron County, in 1930–31, the towns of Hough, Baker, and Straight emerged. The line was abandoned in 1972. In far western Texas County, the Elkhart and Santa Fe Railway, organized in 1925, built tracks from Elkhart, Kansas, to Felt, Oklahoma, in Cimarron County; the line was subsequently leased to the Atchison, Topeka and Santa Fe system. In 1929 the CRI&P constructed a line from the Kansas state line east of Liberal to the Oklahoma-Texas line near Hitchland. This route also has been abandoned.

During the pre-Depression years the population remained stable, with most people involved in farming, ranching, or agricultural support services. The 1920 census counted 13,975 and the 1930 census counted 14,100, but after the droughts of the Dust Bowl era devastated High Plains agriculture, by 1940 only 9,896 remained. The county was at the center of the infamous "Black Sunday" dust storm of April 14, 1935.

Through the first three decades of the twentieth century small farms and ranches prevailed, and most people raised both crops and cattle. In 1920 more than half of the county's 2,266 farms were under five hundred acres in size. Consolidation during and after the 1930s increased farm size but decreased their numbers. For example, in 1920, only 534 were larger than five hundred acres, but of the 1,260 farms existing in 1950, 736 were more than five hundred acres, and of those, 343 were larger than one thousand. During the years of the Dust Bowl and the Great Depression farm tenancy hovered around 30 percent. Texas County produced 984,000 bushels of wheat in 1957, and by 1990 it was the state's fourth-largest wheat-producing county, harvesting 10.3 million bushels. It led the state in producing grain sorghums, with 4.2 million bushels, or one-quarter of the state's harvest. Generally, more than half of all crops are produced on irrigated land.

By 1990 the cattle-feeding and dairy industries were accommodating more than three hundred thousand head, and meat packers maintained plants there. When the Swift beef packing plant near Guymon closed in 1987, local governments sought new industry. In the 1990s hog raising and packing became an important part of the economy when Kansas-based Seaboard Corporation began operations. Thereafter, in numbers of hogs raised, Texas County rose from twenty-fourth in the nation to ninth by 1997 and became the state's number-one producer of both hogs and cattle. At the beginning of the twenty-first century the Hitch Ranch remained the county's foremost cattle-raising enterprise. Wheat, sorghum, and cattle remained economic mainstays into the twenty-first century.

Petroleum exploration began in Texas County in 1922. After the first natural gas well of the giant Hugoton-Panhandle gas field was completed, oil and gas production increased rapidly around Guymon. Four carbon-black plants operated near Optima from the mid-1930s through the 1940s. The county remains the nation's largest producer of gas, and gasoline extraction plants provide employment.

Texas County provides recreational and educational opportunities for the surrounding region. Two miles north of Hardesty is Optima Lake. Authorized in 1935 and funded in 1963, construction on a dam on the North Canadian River and Coldwater Creek was begun in 1966, with the lake opening in 1978. In 1975 the federal government took four thousand acres of rangeland surrounding the lake for a national wildlife refuge. Oklahoma Panhandle State University, established in 1909 as a land grant college called Pan-Handle Agricultural Institute, is located at Goodwell, as is the No Man's Land Historical Museum, affiliated with the Oklahoma Historical Society. Among National Register properties in Texas County are ten wood-frame grain elevators, the headquarters of the CCC Ranch west of Texhoma, and numerous archaeological sites.

The county's population rebounded in the post–World War II years, reaching 14,235 in 1950 and 16,352 in 1970. By the end of the twentieth century it was 20,017. The 2010 census reported a population of 20,640, of whom 76.6 75.7 were white, 1.6 African American, 1.3 American Indian, and 1.6 percent Asian. Hispanic ethnicity was identified as 4.2 percent. The economy remains largely based on agriculture, and 37 percent of employed residents work in agriculture-related manufacturing. U.S. Highways 54 and 64 intersect with State Highway 3 in Guymon, which also has a municipal airport. State Highways 94, 95, and 136 provide access to the major thoroughfares.

The following (as per The Chicago Manual of Style, 17th edition) is the preferred citation for articles:
Dianna Everett, “Texas County,” The Encyclopedia of Oklahoma History and Culture, https://www.okhistory.org/publications/enc/entry?entry=TE021.