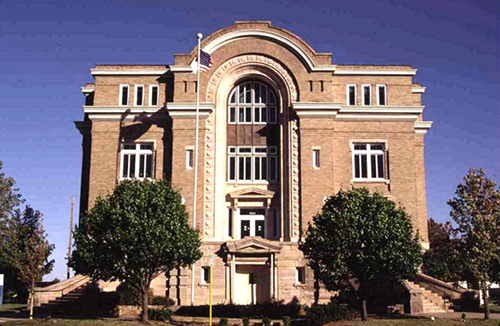 Located in northeastern Oklahoma, Washington County contains a total land and water area of 424.15 square miles, making it the state's smallest county. It is bordered by Nowata and Rogers counties on the east, Tulsa County to the south, Osage County on the west, and the state of Kansas to the north. Named for U.S. Pres. George Washington, Washington County was created at 1907 statehood. The incorporated towns are Bartlesville (the county seat), Copan, Dewey, Ochelata, Ramona, and Vera. U.S. Highway 60 runs east-west through the county and intersects U.S. Highway 75, a north-south thoroughfare, at Bartlesville. State Highway 123 extends southwestward from Dewey to near Barnsdall in Osage County.

Washington County lies in the Eastern Lowlands physiographic region. The south- to southeast-flowing Caney River and its tributaries drain the county. In April 1983 the U.S. Army Corps of Engineers completed the Copan Dam on the Little Caney River, creating Copan Lake, the county's largest reservoir. Other bodies of water include natural Silver Lake and Bar-Dew Lake, a 1930s Works Progress Administration project.

Archaeologists have identified sixteen Archaic (6000 B.C. to A.D. 1), twenty-three Woodland (A.D. 1 to 1000), and eight Plains Village (A.D. 1000 to 1500) sites in the county. Mounds similar to those of the Mississippian Culture are located in northern Washington County and date from circa A.D. 960. Various Caddoan-speaking peoples inhabited the region to about 1760 when the Osage of Missouri displaced them. Spain, France, and England claimed Oklahoma before the United States acquired the region in the Louisiana Purchase of 1803. American trader Jacob Fowler provided the earliest description of Washington County in his diary of the Glenn-Fowler Expedition, which camped beside the Caney River in October 1821.

The Osage ceded their Oklahoma land claims in 1825 and then removed to present Kansas. In 1828 the Western Cherokee exchanged their Arkansas lands for a home in the former Osage domain; the 1835 Treaty of New Echota confirmed Cherokee possession of the territory. Washington County was a sparsely populated section of the Cherokee Nation's Saline District from 1840 until 1856, and the Cooweescoowee District from 1856 to 1906.

James L. Butler, an intermarried Cherokee, established the area's first post office in 1859 at the confluence of Butler Creek and the Caney River. Known as Little Verdigris, the site was located just southeast of today's Oak Park Edition in Bartlesville and also included a trading post and school. Most residents left the region during the Civil War years, and the post office was closed in 1866.

In 1867 the Cherokee sold 157,600 acres of land to the Eastern Delaware of Kansas. Mostly located along the Caney River, this tract amounted to 160 acres for each of the 985 Delaware who registered for removal. When the Cherokee Nation was allotted, 198 surviving Registered Delaware received 160-acre allotments, and an additional 902 tribe members received eighty acres each. The average Cherokee allotment in Washington County was about seventy acres.

Washington County's earliest white residents either acquired permits to work and dwell within the Cherokee Nation or were Cherokee and Delaware by marriage. Nelson F. Carr, an intermarried Cherokee, was among the first, settling near the site of the Little Verdigris post office in 1868. Jacob H. Bartles, the son-in-law of Delaware Chief Charles Journeycake, arrived in Washington County in 1873. Others were Joseph H. Bennett, William Johnstone, and George B. Keeler. These men employed themselves as merchants, millwrights, farmers, and ranchers.

Other county agricultural products included potatoes, sorghum, and oats. Prairie hay was a major commodity in the Vera area, and native pecans were harvested. A fruit industry was present at statehood, with apple, pear, peach, plum, and cherry trees being grown. In 2002 Washington County orchards occupied 4,167 acres of land.

Cattle and hogs were primary industries before statehood. Texas cattle destined for Elgin, Kansas, were driven along a trail through Washington County. Feral hogs, the descendants of once-domesticated animals, were gathered and herded to Kansas markets or slaughtered and consumed locally. The railroad brought an end to the trail drives, but ranchers utilized trains to import cattle for grazing. In 1909 an estimated three hundred thousand cattle grazed in Washington County, but only 34,976 were counted in 2002.

The railroad entered the region in 1899 when the Atchison, Topeka and Santa Fe Railway (AT&SF) completed a line from Owen in northern Washington County to Owasso in Tulsa County. The Missouri, Kansas and Texas Railway (MK&T) extended from Stevens, Kansas, to Dewey and from Hominy in Osage County to Bartlesville. The former line was constructed in 1901–02 and the latter in 1903–04. The MK&T leased track between Bartlesville and Dewey from the AT&SF and used Bartlesville's AT&SF depot. Passenger service in Washington County stopped in 1971. The MK&T line from Bartlesville to Coffeyville, Kansas, was acquired by the Southeast Kansas Railroad (SEKR) in 1994 and is presently inactive. The South Kansas and Oklahoma Railroad purchased the local AT&SF track in 1990 and merged with the SEKR in 2000.

Washington County lies within the Mid-Continent Oil Region. The presence of petroleum in the county was known by 1875. The Nellie Johnstone Number One, Oklahoma's first commercial oil well, was drilled at Bartlesville in 1897. However, communal Cherokee ownership of the land and the lack of crude oil markets and a reliable transportation system hindered the growth of a local petroleum industry.

Bartlesville became Oklahoma's first oil boomtown with the development of the oil fields in neighboring Osage County. In 1900 the Phoenix Oil Company laid Oklahoma's first pipeline from Osage County to an oil loading facility near Bartlesville's AT&SF depot. Oil was first shipped by rail from Bartlesville to a Neodesha, Kansas, refinery that same year. Development of the Bartlesville Field peaked in 1904–06. The Bartlesville-Dewey Field was discovered in 1905 and the Copan, Canary, Hogshooter, and Wann fields were located in 1907. Fields were also tapped at Ochelata (1910), Ramona (1911), and Vera (1915). Despite a decrease in yield, Washington County's oil and natural gas wells remained productive into the twenty-first century.

The oil boom brought numerous oil company headquarters to Washington County. These included the Indian Territory Illuminating Oil Company, the Cities Service Oil Company, and the Phillips Petroleum Company, the latter being the mainstay of the local economy. The region's abundant natural gas fueled zinc smelters at Bartlesville and at Dewey's Portland Cement Company, which used local limestone to manufacture the first cement produced in Oklahoma. Sandstone, shale, and asphalt deposits are also present in the county.

The following (as per The Chicago Manual of Style, 17th edition) is the preferred citation for articles:
Jon D. May, “Washington County,” The Encyclopedia of Oklahoma History and Culture, https://www.okhistory.org/publications/enc/entry.php?entry=WA034.