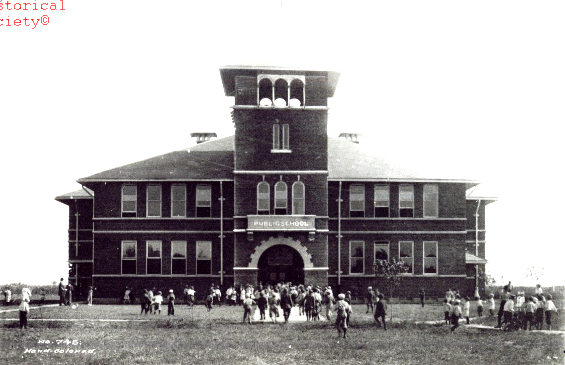 Located in southwest Ottawa County, Afton is on U.S. Highway 60/69, which is Historic U.S. Highway 66. The town developed in this part of the Cherokee Nation after the Atlantic and Pacific Railroad (later the St. Louis and San Francisco Railway, or Frisco) built tracks through the area to Vinita in 1871. Oklahoma historian George Shirk asserts that a Scottish railroad surveyor, Anton Aires, named the town Afton after his daughter. Others have claimed the name comes from Robert Burns's poem, "Flow Gently Sweet Afton." Both Afton Aires' name and the Burns's poem honor the Afton River in Scotland.

In 1886 the Post Office Department established an Afton post office. In 1900 the town had a population of 606. The village began a growth spurt in 1901 when the Kansas City, Fort Scott and Memphis Railroad, which soon became part of the St. Louis and San Francisco (Frisco) system, constructed another line through the town, creating a shorter route to Kansas City. With a 1910 population of 1,279, Afton was known as a railroad center, containing a Frisco division point and shipping center. In 1911 the town boasted a large waterworks, two new school buildings, two hotels, two banks, a brick and tile plant, a creamery, a newspaper, mills, grain elevators, and many other businesses. Agriculture played a significant role in the area's economic profile, with wheat, corn, hay, and ranching important. A 1920 census count of 1,518 residents dropped during the post–World War I agricultural depression to 1,219 in 1930.

In the 1920s and 1930s U.S. Highway 66, "the Mother Road," brought more industry into the town, and in 1995 two Route 66–related locales, Cities Service Station (NR 95000039) and Horse Creek Bridge (NR 95000040), were listed in the National Register of Historic Places. Afton's proximity to Grand Lake O' the Cherokees, created in 1940 by the completion of the Pensacola Dam by the Grand River Dam Authority, thereafter attracted tourist dollars to the community. Nevertheless, the 1940 population of 1,261 slowly declined to 1,111 in 1960. In the 1970s the Northeast Technology Center located at Afton, providing career-oriented training to its students.

The 2000 census counted 1,118 Afton residents, and in 2010 the population stood at 1,049. The town supported the Afton Memorial Hospital, which had been established in the 1940s, and other businesses consistent with a town its size. The Darryl Starbird National Rod and Custom Hall of Fame Museum, located at Afton, hosts an anniversary celebration every June when it inducts two more members.

The following (as per The Chicago Manual of Style, 17th edition) is the preferred citation for articles:
Larry O'Dell, “Afton,” The Encyclopedia of Oklahoma History and Culture, https://www.okhistory.org/publications/enc/entry.php?entry=AF005.