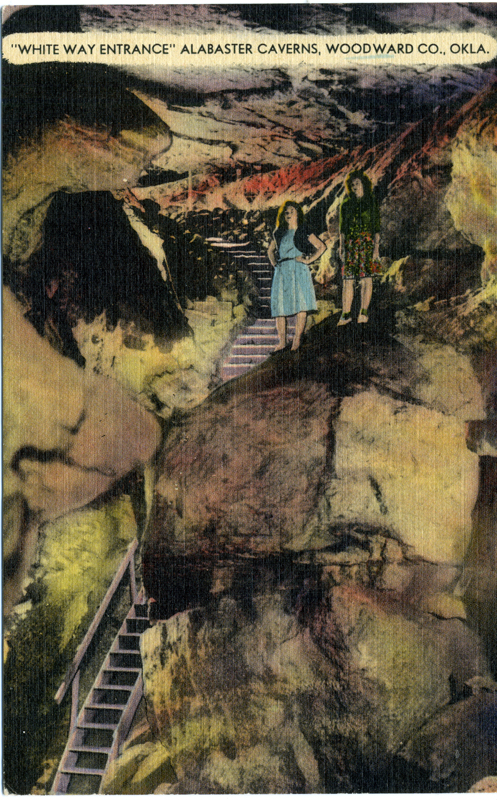 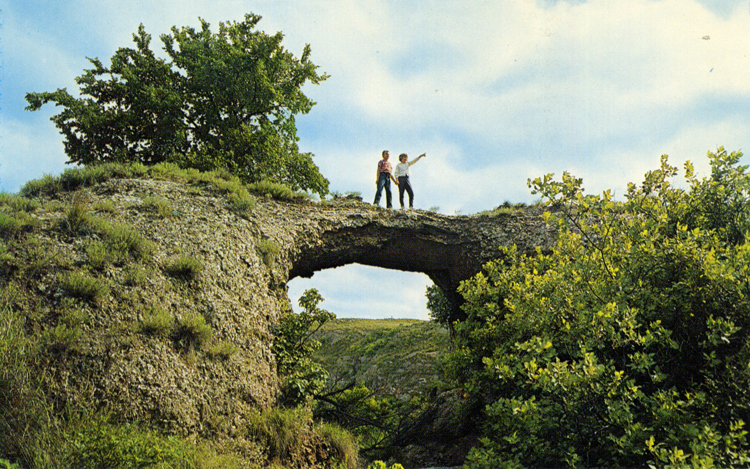 Alabaster Caverns State Park, located in Woodward County six miles south of Freedom near State Highway 50, encompasses one of the world's largest gypsum caves open to the public. An inland sea covered the area over two hundred million years ago during the Permian Age. The water evaporated and left large deposits of gypsum and other minerals. An upheaval of the earth raised the gypsum bed close to the surface, and over time, water streams tunneled caverns through the formation. The caverns contain an abundance of crystals of selenite and white and pink gypsum as well as deposits of rare black alabaster. The main cavern is three-fourths of a mile long, with a maximum height of fifty feet and width of sixty feet. It branches into numerous caves with uniquely named boulder formations, such as "Ship's Prow," and into chambers called "Devil's Kitchen" or "Crystal Vault." The cavern temperature ranges from 52˚F to 58˚ year round.

No official record of first discovery has surfaced to date; however, the caverns once served as safe haven for outlaws. Evidence suggests that the first known exploration of the caves occurred in 1898. Hugh Litton homesteaded the area during the Cherokee Outlet Run of 1893. In the 1920s and 1930s various individuals leased the land comprising Alabaster Caverns and allowed limited touring of the locally known "Bat Caves" for a nominal fee. Public tours of the cavern increased with the 1939 purchase and renovation of the caverns by Englishman Charles Grass. Grass preferred to call the natural wonder "Alabaster Caverns."

Due to Grass's failing health, in late 1952 five businessmen from Freedom and members of the Waynoka Railroad Labor League spearheaded a movement for the State of Oklahoma to purchase the cavern land. Oklahoma purchased the two hundred acres from Grass on September 1, 1953, for thirty-four thousand dollars, at which time the caverns came under the jurisdiction of the Oklahoma Planning and Resources Board. After additions to the property, the state reclassified the area as a state park in 1956. It served as a nuclear fallout shelter in the mid-1950s.

The cavern also provides shelter to five species of bats. With the bat population fluctuating up to ten thousand, tourists can encounter the cave myotis, western big-eared bat, eastern pipistrelle, western big brown bat, and Mexican free-tailed bat throughout the year. The park lies inside Cedar Canyon and provides facilities for picnicking, riding, hiking, and, with proper equipment, "wildcaving" of the five undeveloped caves in the park. Alabaster Caverns has developed into one of Oklahoma's most popular tourist stops with over forty thousand visitors per year.

The following (as per The Chicago Manual of Style, 17th edition) is the preferred citation for articles:
LaRadius Allen, “Alabaster Caverns State Park,” The Encyclopedia of Oklahoma History and Culture, https://www.okhistory.org/publications/enc/entry?entry=AL002.