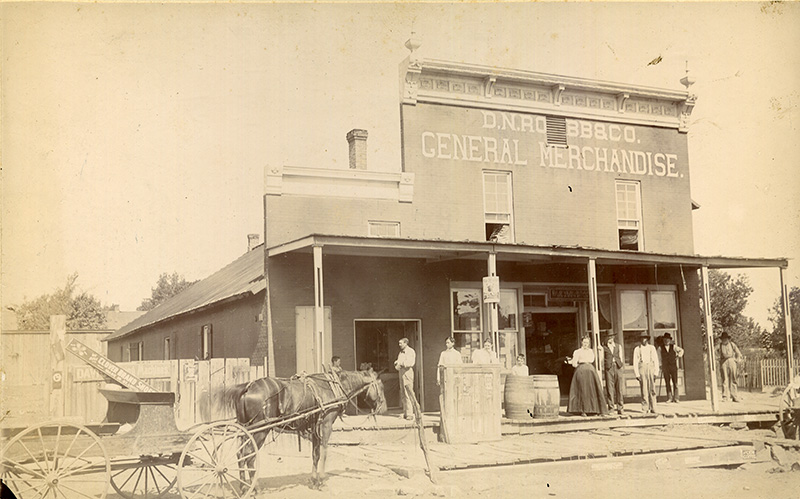 The seat of Atoka County, Atoka is situated at the crossroads of U.S. Highways 69 and 75, running north and south, and State Highways 3 and 7, skirting the southern section of town from east to west. Located forty-five miles southwest of McAlester, Atoka is approximately a two-hour drive from Oklahoma City and Dallas, Texas. Founded by Choctaw Indians in the 1850s and named for a Choctaw subchief who lived nearby, Atoka has a diverse and historic background. Its early growth and development were due largely to Baptist missionary Joseph S. Murrow, who established a mission to the Choctaws there in 1867 and a church in 1869.

Travelers and trade goods came through the area on the Texas Road and military roads. On September 20, 1858, John Butterfield's coach rumbled into Geary's Station, on Muddy Boggy River (creek) near present Atoka. The stage line carried both mail and passengers from St. Louis, Missouri, to San Francisco, California, until 1860. Even though a post office was established in 1868, Atoka remained little more than a dispersed rural community, with the main hub of commerce located at Boggy Depot, established in 1837 by Chickasaws fourteen miles southwest, on the Texas Road.

The Choctaw and Chickasaw tribal court grounds and courthouse were situated just north of present Atoka along the Muddy Boggy River on land owned by A. J. Harkins. The meetings were held in the open around campfires until 1867 when the nation made an agreement with a pioneer settler of Atoka, J. D. Davis, to build a courthouse. Atoka did not show its potential until 1872, when the Missouri, Kansas and Texas Railway (MK&T) laid ties and rails through the Choctaw Nation and bypassed Boggy Depot. Almost immediately businesses relocated closer to the railroad tracks. In 1872 Father Michael Smyth established St. Patrick's Catholic Church, the first Catholic congregation in present Oklahoma. Then in June 1898 the Curtis Act passed, providing that Indian tribal courts would be abolished and all cases, white or American Indian, would be tried in U.S. federal courts. The Dawes Commission was ordered to proceed with the allotment of lands, and townships were reserved and provisions made to sell town lots. Thus ended the first stage of Atoka's history.

In the late nineteenth century the town's primary economic resource lay in nearby rich stands of timber. Sawmills gave birth to lumber companies. Both took advantage of the abundant hardwood forest, ample water from Boggy River, and the MK&T railroad. Many newspapers have served the area, including the Atoka County Gazette, Jeffersonian, Atoka County Times, Atoka Independent, Branding Iron, Indian Champion, Indian Citizen, Indian Missionary, and Atoka Democrat. The population stood at eight hundred in 1890, and climbed to 1,968 in 1910 and 2,038 in 1920. Moonshining supplemented many hardworking families' incomes during the Great Depression of the 1930s. By 1930 the number of residents had dropped to 1,856.

Eventually, sawmills gave way to farming and ranching, which still served the area at the beginning of the twenty-first century. With the exception of Ethan Allen, Choctaw Nation Fabricators, and Kenco, manufacturing remained scarce in Atoka in 2000 although there was a 160-acre city industrial park and other 40-acre tracts ready for development. Southeastern Oklahoma State University is a thirty-minute drive from Atoka. The city has a municipal airport with 2,680 feet of runway, and Greyhound buses provide service. Without sufficient job opportunities and housing, the city's population has varied. The census recorded 2,548 in 1940 and 2,877 in 1960. The population reached a peak of 3,409 in 1980, declined to 2,988 in 2000, and rose to 3,107 in 2010. Novelist Todd Downing hailed from Atoka. Many sites in and around town are listed in the National Register of Historic Places, including the Atoka Armory (NR 88001372), Old Atoka County Courthouse (NR 79001984), Boggy Depot Site (NR 72001050), Middle Boggy Battlefield Site and Confederate Cemetery (NR 72001051), and nine others. The Confederate Memorial Museum commemorates local history and a Civil War engagement of February 13, 1864, on nearby Middle (Muddy) Boggy River.

The following (as per The Chicago Manual of Style, 17th edition) is the preferred citation for articles:
Priscilla A. Maine, “Atoka,” The Encyclopedia of Oklahoma History and Culture, https://www.okhistory.org/publications/enc/entry.php?entry=AT003.