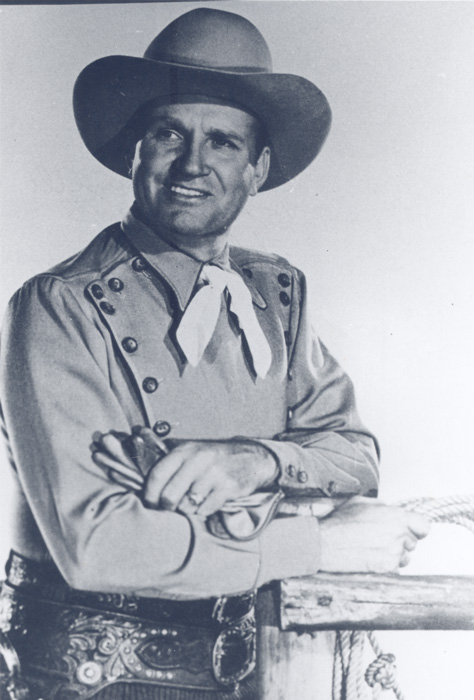 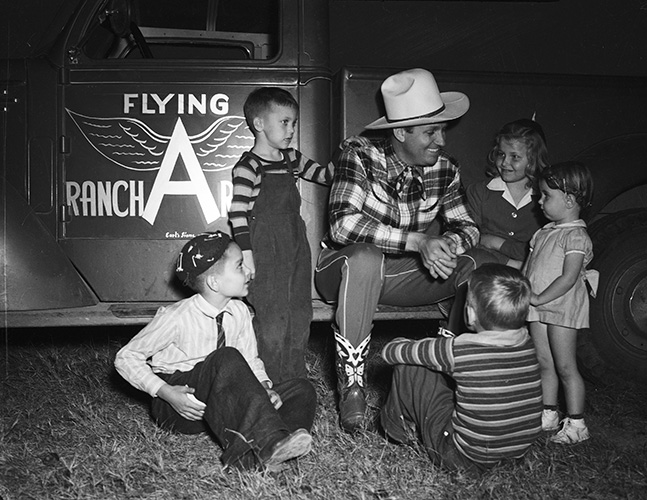 An actor and singer who was billed as "America's favorite cowboy," Orvon Gene Autry was born to Delbert and Elnora Ozmont Autry on September 29, 1907, on a small tenant farm near Tioga, Texas. The Autrys soon moved to Achille, Oklahoma, and later homesteaded near Ravia. A teenaged Autry found work at the local St. Louis and San Francisco Railway depot as a baggage hauler; in payment, the stationmaster gave him free lessons in telegraphy.

Late one night, while filling in for a telegrapher at Chelsea, Oklahoma, Autry was singing and playing his guitar. According to legend, humorist Will Rogers came into the office to dispatch his daily syndicated column and was impressed by Autry's singing. With Rogers' encouragement, in 1927 Autry headed to New York to "make a record." Soon he found himself back in Tulsa, singing as "Oklahoma's Yodeling Cowboy" on KVOO Radio.

Autry found work in the infant movie industry in Hollywood, debuting, uncredited, with Ken Maynard in In Old Santa Fe (1934). Arguably the most famous, if not the first, singing cowboy, he starred in ninety-three movies, most of them musical Westerns and most with his faithful horse, Champion.

Autry released 635 records during his career and wrote several super hits including his first, "That Silver-Haired Daddy of Mine" (1932) and his trademark, "Back in the Saddle Again" (1939). His other signature tunes included "Tumbling Tumbleweeds," "Here Comes Santa Claus," "You Are My Sunshine," and "Rudolph the Red-Nosed Reindeer."

Autry also found fame on radio and television. His Melody Ranch show aired on CBS radio from 1940 to 1956. The first movie actor to star in a regular television series, in 1950 Autry premiered The Gene Autry Show on CBS. From his home base at "Melody Ranch," he fought evildoers of all varieties in a show that endured through the mid-1950s.

After his career ended, Autry owned radio and television stations and in 1983 purchased the California Angels baseball team. In 1941 he established a large ranch near his old Oklahoma home, and the same year the nearby town of Berwyn, Oklahoma, changed its name to Gene Autry. Autry died in California on October 2, 1998.

The following (as per The Chicago Manual of Style, 17th edition) is the preferred citation for articles:
Eric Dabney, “Autry, Orvon Gene,” The Encyclopedia of Oklahoma History and Culture, https://www.okhistory.org/publications/enc/entry.php?entry=AU004.