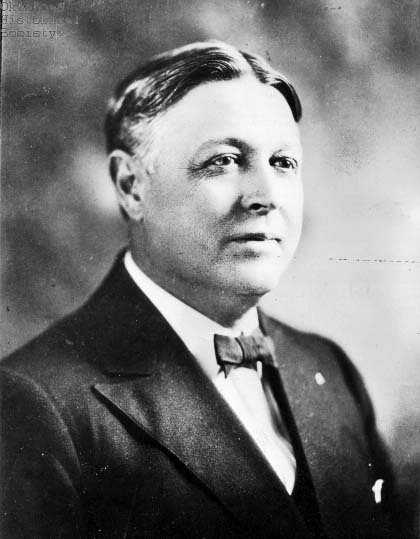 Author, educator, and university president, William Bennett Bizzell, the only son of George McDuffie and Sarah Elizabeth Wade Bizzell, was born on October 14, 1876, in Independence, Texas. A dedicated scholar, he received two degrees from Baylor University and two from the Illinois College of Law. He also earned a master's degree from the University of Chicago in 1913 and a doctorate from Columbia University in 1921. After his family moved to Navasota, Texas, he met and married Carrie Wray Sangster, on August 16, 1900. They had two children. He served as Navasota's public school superintendent from 1900 to 1910. Between 1910 and 1914 he was president of the College of Industrial Arts (now Texas Woman's University) at Denton, Texas. In 1914 he accepted the presidency of the Agricultural and Mechanical College of Texas (now Texas A&M University).

Learning about his successful administrations and achievements, the Oklahoma Board of Regents sought his leadership, and on July 1, 1925, he became the University of Oklahoma's fifth president. His tenure was filled with notable achievements, many accomplished during years of political opposition from Gov. William H. Murray and increasingly smaller fiscal appropriations. However, enrollment increased, and additional degree programs were established. Among the buildings constructed during his administration were the Oklahoma Memorial Union, Buchanan Hall, and the football stadium. Bizzell was instrumental in obtaining funding from oil titan Frank Phillips to establish the Phillips Collection (a body of works on Southwestern history) and from oilman Louis "Lew" Wentz to establish a student loan fund. Appreciative of the arts and humanities, Bizzell encouraged Roy Temple House to produce the university publication, Books Abroad, a literary journal (now World Literature Today). During Bizzell's tenure a new library was built and the holdings substantially increased, and the University of Oklahoma Press was established under the direction of Joseph A. Brandt. Another of Bizzell's major achievements was the development of the medical center in Oklahoma City. He became president emeritus and head of the OU department of sociology after retiring from the presidency in 1941.

A member of several associations, he was a fellow of the Royal Economic Society of England and president of the National Association of State Universities. Between the 1910s and the 1920s he authored numerous books. Inducted into the Oklahoma Hall of Fame in 1936, he also received the Medal of Excellence from Columbia University. The class of 1943 donated a statue of him, which was placed in front of the OU library, named in his honor. Bizzell died in Norman, Oklahoma, on May 13, 1944.

The following (as per The Chicago Manual of Style, 17th edition) is the preferred citation for articles:
Kitty Pittman, “Bizzell, William Bennett,” The Encyclopedia of Oklahoma History and Culture, https://www.okhistory.org/publications/enc/entry?entry=BI015.