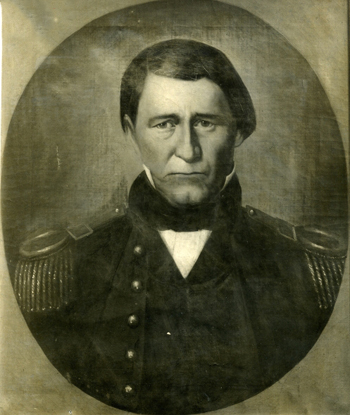 Explorer and military officer Nathan Boone, born on March 2, 1781, was the youngest son of Daniel and Rebecca Bryan Boone. Nathan Boone utilized important family connections to make his own mark in Missouri and Oklahoma history. He accompanied his family from Boone's Station, Kentucky, in 1799 to near St. Charles, Missouri. He married Olive Vanbibber, and the two extended families engaged in farming and fur trading in the newly opened frontier lands. Boone and brother-in-law Matthias Vanbibber formed a partnership in 1804 to trap along the Grand River of Missouri, but they lost most of their furs to Osage warriors. Problems with the Osage complicated Boone's endeavors during the following years, but he engaged in the salt trade, surveyed western Missouri counties for the government, and in 1808 helped establish Fort Osage.

Boone gained a reputation for being an able guide and an efficient militia officer. He helped arrange for an important meeting with the Osage at Fort Osage in 1811, participated in militia operations against neighboring tribes, was commissioned a captain of the Missouri Mounted Rangers in March 1812, and commanded troops in operations against Illinois Indians the following year. Boone was elected as a delegate to the Missouri constitutional convention in June 1820, and he took an active role in important deliberations.

As always, military duties beckoned him away from family and private business concerns. While surveying the northern boundary of the neutral ground in Iowa during the summer of 1832, he was summoned by his state for militia duty. Again commissioned a captain of the Missouri Mounted Rangers, he served under Gen. Henry Atkinson during the Black Hawk War. Boone's exposure to Gen. Atkinson and other notables led to duties in Indian Territory, where eastern tribes were being relocated by the government. As commander of a company of Mounted Missouri Rangers, he arrived at Fort Gibson on November 22, 1832. During the following spring he surveyed the boundary between the Creek and Cherokee Nations.

At this time, Congress decided to create a force of mounted dragoons to deal with the mobile tribes of the Great Plains. Perhaps the most important military assignment of 1834 fell to the Dodge-Leavenworth Expedition assigned to impress the Kiowa and Comanche Indians with American power. Captain Boone commanded Company H of the First Dragoons, Cherokee trader Jesse Chisholm served as interpreter, and celebrated artist George Catlin accompanied this column to visually record its scenes. After five weeks of travel, confronted with heat and a shortage of water, the men reached the Wichita village near Devil's Canyon on the North Fork of the Red River. Col. Henry Dodge convened the council of Comanche, Kiowa, and Wichita warriors on July 22. Despite promises of trade and alliances, few lasting benefits emerged from the proceedings. Furthermore, Gen. Henry Leavenworth and approximately 150 men of the expedition died during the operations.

During the following decade Boone divided his attention between public duty and private life. Having relocated to Greene County, Missouri, he spent little time with his family. From 1834 through 1837, while stationed in Iowa, he conducted numerous explorations of the western half of the territory and helped survey part of the military road between Fort Snelling, Minnesota, and Fort Gibson, Indian Territory.

During the summer of 1843 Boone commanded a reconnaissance through the western areas of Indian Territory to near the New Mexican boundary. Departing Fort Gibson on May 14, he led the force of nearly one hundred soldiers into the lands between the Arkansas and Red rivers, and he compiled reports about the terrain, water sources, and Indian inhabitants. Especially important was his search for salt deposits that were thought to be commercially exploitable. Initially tracking northward into the area of present south-central Kansas, the command intersected the Santa Fe Trail and provided protection for an overland trading caravan before turning southward to the Canadian River. When the column reached Fort Gibson on July 31, it had accomplished its goal of exploring the Great Salt Plain.

Afterward, Boone periodically commanded Fort Gibson, undertook Indian negotiations, and drove trespassers out of Cherokee lands. In 1847 he was promoted to major of the First Dragoons and three years later to lieutenant colonel of the Second Dragoons. He retired from military service on July 15, 1853, and returned to his home at Ash Grove, Missouri, where he died on October 8, 1856. As an explorer, surveyor, and military officer, Nathan Boone made a significant contribution to the history of Oklahoma and honored his proud family name.

The following (as per The Chicago Manual of Style, 17th edition) is the preferred citation for articles:
Michael L. Tate, “Boone, Nathan,” The Encyclopedia of Oklahoma History and Culture, https://www.okhistory.org/publications/enc/entry?entry=BO013.