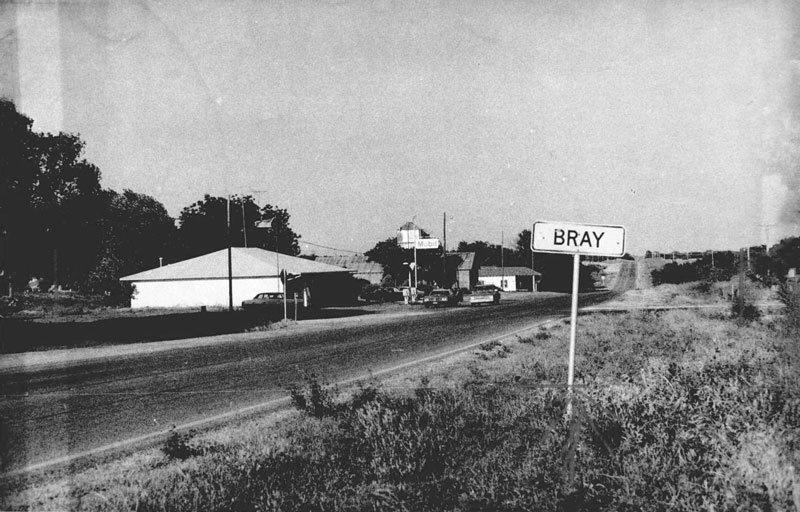 Bray is situated on State Highway 29, nine miles due east of Marlow in north-central Stephens County. The town lies between Clear Creek Lake and Lake Fuqua. The local post office was designated in November 1908, with the community taking the last name of the first postmaster, Thomas W. Bray.

In 1909 Bray supported a general store, a blacksmith, a constable, a physician, and two teachers, as well as four grain and livestock enterprises. Ten years later the town had a gristmill, general store, grocery, and restaurant, in addition to a Union church and public school. The unincorporated community continued through the next five decades with its cotton gin, a small store, and post office, all located along the highway, forming a small central business district. In addition to cotton farming, oil and gas activity attracted much attention over the years. In 1977 members of the Bray community incorporated the town to avoid annexation by Marlow or Duncan. Encompassing a total of sixty-six square miles, larger than many major cities, the town had a main street that extended for eight miles. Despite the expansive city limits, the town remained overwhelmingly rural.

In the late 1910s Bray had an unofficial population of 55. At the time of its incorporation in June 1977 the number stood at 650. Included in the federal census for the first time in 1980, the population had declined to 591. A significant boom occurred in the following decade, and by 1990 the town claimed 925 citizens. This number continued to climb; in 2000 there were 1,035 persons residing within the city limits, and the number grew to 1,209 in 2010. The town has never had a local newspaper. Most residents worked in nearby larger towns.

The following (as per The Chicago Manual of Style, 17th edition) is the preferred citation for articles:
Cynthia Savage, “Bray,” The Encyclopedia of Oklahoma History and Culture, https://www.okhistory.org/publications/enc/entry.php?entry=BR009.