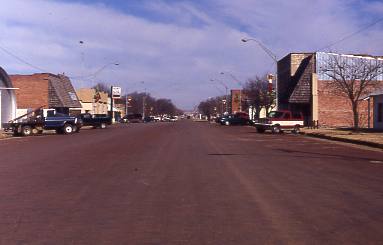 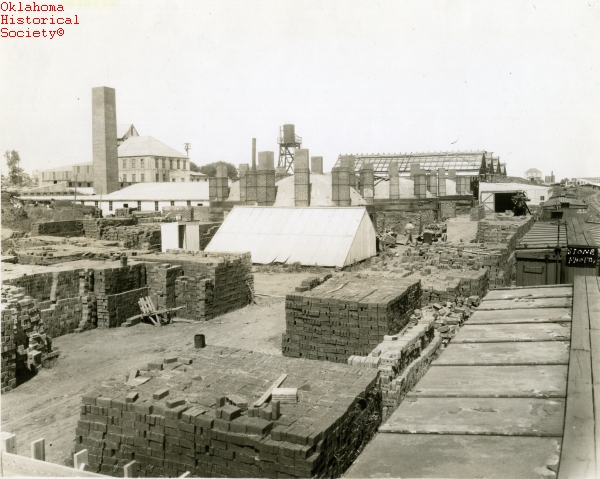 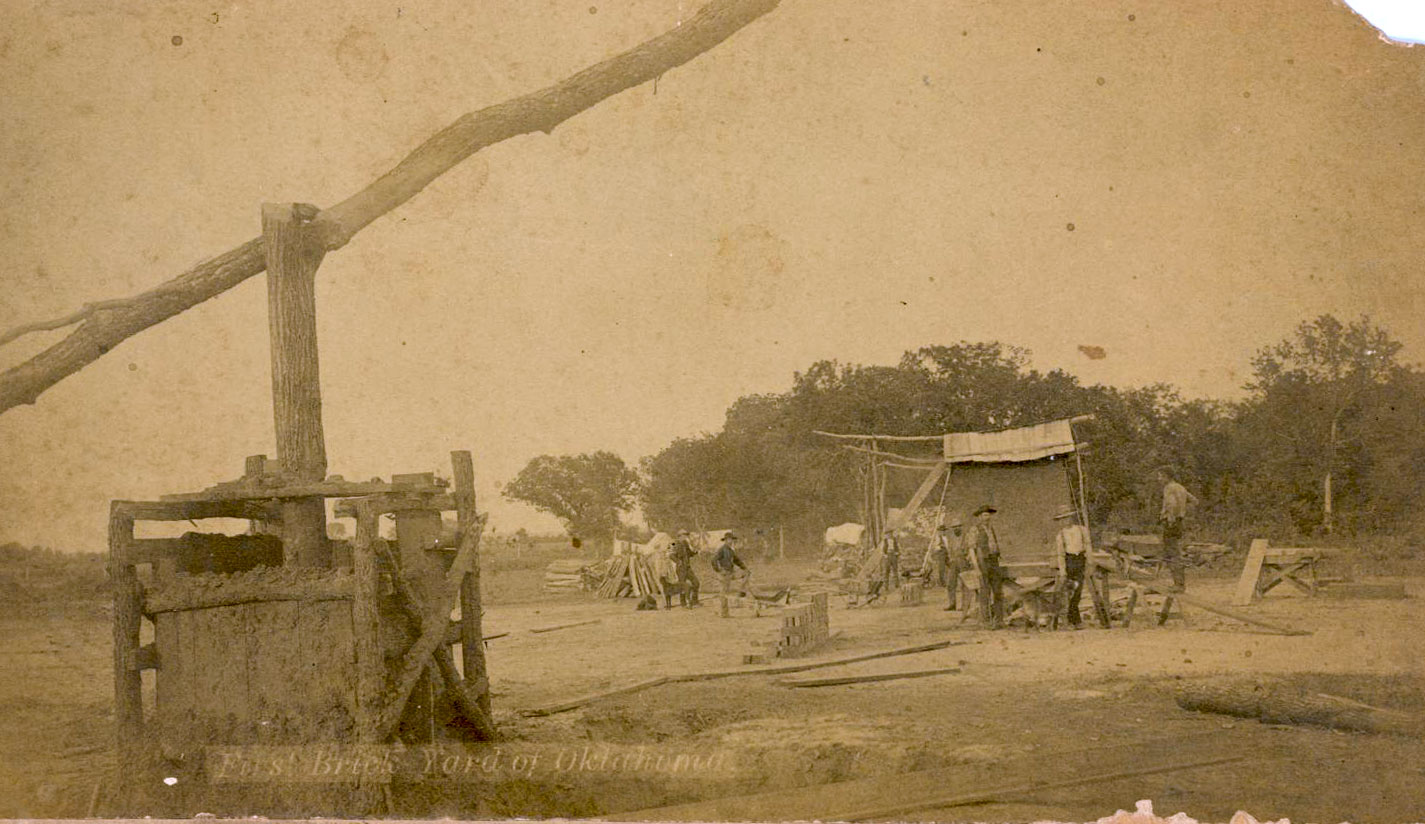 Among Oklahoma's varied and numerous natural resources, raw earth itself might not seem valuable, at first observation. However, deposits of clay and shale, the essential ingredient in brick and tile, are found in almost all of the seventy-seven counties, and most of the substance is suitable for creating some kind of building material. Clay products produced in Oklahoma have included face brick, common brick, paving brick, construction-grade terra cotta tile, drainage tile, plumbing tile, sanitary tile, pottery, and stoneware.

Bricks have historically been one of the state's most important building materials. When true towns began to rise amid the hills and on the prairies in the mid- to late-nineteenth century, residents customarily built their stores and homes of wood. Quite often, in both Indian and Oklahoma territories a town's first brick edifice was a bank. In hundreds of communities, "bricks" were erected after entire blocks of wood-frame buildings burned. Because it was fire-retardant, brick became the preferred construction material in the late nineteenth and early twentieth centuries. Oklahoma-made brick tended to be either red or dark buff in color, thereby giving character to the main streets of many towns. In addition to residences, churches, and business buildings of brick, a considerable number of barns and other farm structures and grain elevators were constructed of terra cotta tile blocks.

Brick manufacturing was one of the earliest industries to develop during the Territorial Era, providing an economic boost in both territories. Brick may have been manufactured in the Cherokee Nation as early as 1844, when Mormon missionaries in Tahlequah reportedly built a kiln and made bricks to erect a store for Cherokee Chief John Ross, a hotel, and another building. Around 1855 an English stonemason dug local clay and fired bricks for a Presbyterian mission church erected at Boggy Depot, in the Choctaw Nation. The earliest known commercial brick plant appeared in 1888 in Purcell, Chickasaw Nation, Indian Territory. After the Unassigned Lands opened in mid-1889, small factories cropped up nearly everywhere a town appeared in Oklahoma Territory.

At the turn of the twentieth century rapid urban growth in cities such as Oklahoma City, Tulsa, McAlester, Muskogee, Enid, and Ardmore created a brick shortage. Demand created producers, and in the 1900–1910 period sixty brick factories operated. After 1907 statehood out-of-state enterprises seized the opportunity to make commercial brick in Oklahoma. For example, when fuel shortages curtailed their operations in the mid-1910s, Kansas companies opened new plants in Okmulgee, Sapulpa, Tulsa, and Bartlesville, hiring from 150 to 400 men in each place. In 1908 Oklahoma kilns produced 74.8 million common bricks and 1.2 million face bricks. Nevertheless, at that time more than 50 percent of the necessary building brick, and all of the tile products, were still being imported from other states, primarily Kansas.

By 1916, as the boom ended, there were thirty-five clay-products plants in Oklahoma, most producing material for buildings and streets, but in 1918 only twenty-nine remained. Many were owned by out-of-state corporations. In the 1920s the United Clay Products Company, of Kansas City, Missouri, maintained plants in Pawhuska, Oklahoma City, El Reno, Sapulpa, Tulsa, Boynton, and Collinsville, the Coffeyville Vitrified Brick and Tile Company of Kansas operated a plant in Collinsville, and the Beacon Brick and Tile Company of Kansas acquired the formerly locally owned Davenport factory.

At the state penitentiary, established in 1909 at McAlester, convict labor operated a brick factory at least as early as 1915. Bricks made there were at first used to build various prison facilities. Around the time of World War I, prison officials began marketing building and paving bricks around the state. In the 1920s the prison annually produced twelve million bricks, some of which were used to construct state-owned facilities. In 1923 sale of prison brick at below market price prompted commercial producers to complain about unfair competition.

The state's transportation history gives evidence of other uses of brick. In the 1910–30 period city streets were frequently surfaced with the more economical and locally available paving brick, rather than asphalt. The demand for paving brick is revealed by comparing Oklahoma statistics for 1907, in which 3.5 million were produced, and 1908, in which 7.6 million were made. Several streets in McAlester were paved with the penitentiary's products, which bore the stamp OSP. Cities still having historic brick streets at the end of the twentieth century included Covington, Davenport, Shawnee, Pauls Valley, Chandler, Guthrie, Texoma, and Bristow, among others.

Oklahoma has numerous historic properties that are significant for their brick construction. For instance, ten red-brick warehouses in Oklahoma City are listed in the National Register of Historic Places. These include the Avery Building (NR 83002097), the J. I. Case Plow Works Building (NR 83002098), and the Merchants' Transfer and Storage Building (NR 83004655). Many of the state's WPA–built, Depression-era National Guard armories were made of locally manufactured brick. Other examples of brick's architectural uses occur in the Automobile Alley Historic District in Oklahoma City and in the downtown Guthrie Historic District, which is a National Historic Landmark. Davenport's Broadway Avenue was listed in the National Register in 2004 for its intact brick street (NR 04000518).

Fewer bricks were locally produced after World War II, and by 1980 only ten brick plants operated in the state; all of them were fifty years old or older. In 1997, of Oklahoma's 254 manufacturers of nonmetallic mineral products, only six companies produced bricks. Forty-five produced other clay products. At the end of the twentieth century Acme Brick (a Texas company) maintained large plants in Edmond/Oklahoma City and Tulsa.

The following (as per The Chicago Manual of Style, 17th edition) is the preferred citation for articles:
Dianna Everett, “Brick Manufacturing,” The Encyclopedia of Oklahoma History and Culture, https://www.okhistory.org/publications/enc/entry.php?entry=BR014.