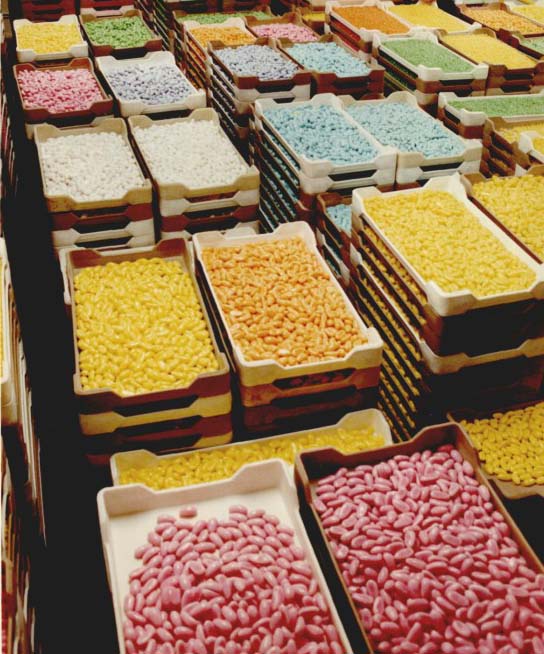 In 1932 Walter L. Williams, a native Oklahoman, founded a confectionary company, or "candy kitchen," in Oklahoma City. The business was one of several similar local manufacturing establishments. His Williams Candy Company operated successfully for thirty years from 9 Park Avenue in Oklahoma City.

Over three decades the company expanded its operations, buying out other candy manufacturers around the state. In 1961 Williams began to expand nationally by purchasing the Bunte Candy Company. Founded in Chicago in 1876 by German immigrants, Bunte was famous for having developed the nation's first chocolate-covered candy bar. The factories made a variety of sugar- and chocolate-based items. In 1954 Bunte had sold out to Chase Candy Company of St. Joseph, Missouri, but continued as Chase-Bunte and retained the Chicago plant. Financial difficulties forced Chase to close, and in 1961 Williams Candy Company purchased the trademarked Bunte brand name, the recipes, and the equipment. A new plant for Williams Candies was installed in a building at 9 East Sheridan, in present Bricktown, and the Bunte division operated from a building at 9 East Grand. Williams's primary market for its Bunte Candy lay within a five-hundred-mile radius of Oklahoma City, but the products were sold in thirty states.

In 1962 Walter Williams sold his factories to Bayuk Cigars, Inc., of Philadelphia. In 1963 Bayuk sold out to Williams's son-in-law, R. T. McLain, of Oklahoma City. Both Bayuk and later McLain continued to produce confectionary items in Oklahoma City under the Bunte brand, employing as many as 250 workers. The company annually grossed a profit of $4 million for 14 million pounds of 70 different types of confections.

In 1990 McLain sold the company to an investment organization that merged it with American Candy Manufacturing Company of Selma, Alabama. Bunte-labeled candy items continued to be sold as late as 1994. In that year Farley Candy Company purchased the American Candy Company product line, and a few years later, the Bunte brand was no longer used.

The following (as per The Chicago Manual of Style, 17th edition) is the preferred citation for articles:
Dianna Everett, “Bunte Candy Company,” The Encyclopedia of Oklahoma History and Culture, https://www.okhistory.org/publications/enc/entry.php?entry=BU021.