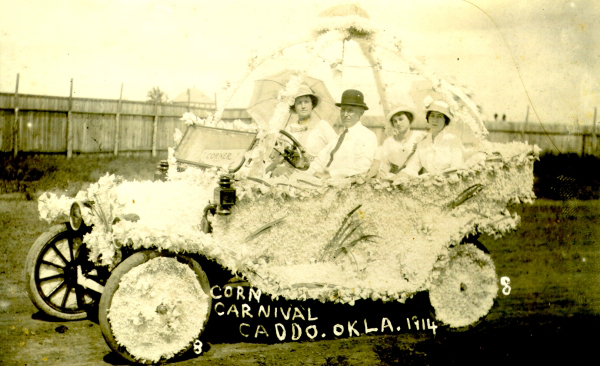 Located in north central Bryan County, Caddo is north of Durant on U.S. Highways 69 and 75, approximately two miles south of the Atoka County border on a branch of the Blue River. The town was named for the nearby Caddo Hills, site of an 1808 battle between the Caddo and Choctaw, in a low range of hills two miles southeast of the town. The engagement was a major defeat for the Caddo. The area was formally part of the Choctaw Nation.

Caddo is the oldest town in Bryan County. The Choctaw Nation originally used the site as a court town, and on the first Monday of each month they gathered at the site to air complaints or to stand trial. The location became a stopping place on the trail between Fort Smith and Fort Sill. Maj. Aaron Harlan built a store nearby. Caddo owed its growth to the Missouri, Kansas and Texas Railway (MK&T, or Katy), which built a line through the Choctaw Nation in 1872. Katy engineer Ben Munson staked out Caddo Station. In October 1872 Big John Scullin and his Irish laborers laid the first track into the site. A post office was established December 19, 1872, with W. S. Burke as postmaster. Aaron Harlan's wife, Sarah Ann, helped found the First Methodist Church in 1873. By 1873 about four hundred people had clustered around the depot. The rapid population influx meant that some residents had to live in tents. Caddo was a communications hub in early years.

The community soon served as a freighting and trade center for a surrounding ranching and farming area. Crops included corn, oats, sugarcane, and cotton, and processing facilities at one time included five cotton gins. In 1874, according to the Oklahoma Star, Caddo boasted three general stores, attorney C. J. Harkins, physician A. D. Folsom, photographer U. M. Cooper, Dr. J. B. Jones, a boot repair shop, a meat market, a blacksmith, a drugstore, and many other businesses. In 1890 the town claimed to have the largest cotton market in the territory. By 1890 the population had grown to 2,170.

Incorporated in 1898, Caddo appeared to be the most populous and promising town in the region. One of its most successful citizens was merchant and noted cattle raiser Wilson Nathaniel Jones, later chief of the Choctaw. When the St. Louis and San Francisco Railway began to build an east-west line across the Katy tracks, the merchants raised land prices, causing the railroad officials to decide to build the tracks through Durant. This made Durant the fastest growing city, and it became the county seat. Caddo was left behind.

Six miles southwest of Caddo lay an area of oil and sulphur springs that served as a resort for southeastern Oklahoma at the turn of the twentieth century. Peter Maytubby operated a health resort at Maytubby Springs. The Choctaw called the springs' waters "God's medicine," and sophisticated townspeople thought the liquid conducive to good health.

In 1930 Caddo's population stood at 933, but it had slowly dropped to 814 by 1960. In 1973 the town celebrated its centennial. Planning committee chairperson was favorite son James Pinckney "Cowboy Pink" Williams, a lieutenant governor and a state treasurer. At the end of the twentieth century Caddo's major industries included ranching operations and one of the state's largest fish hatcheries. The 2000 census recorded a population of 944, and the 2010 census counted 997 residents.

James Culberson, "Indian Against Indian," The Chronicles of Oklahoma 7 (June 1929).

J. B. Wright, "Ranching in the Choctaw and Chickasaw Nations," The Chronicles of Oklahoma 37 (Autumn 1959).

The following (as per The Chicago Manual of Style, 17th edition) is the preferred citation for articles:
Lucille Brimage, “Caddo,” The Encyclopedia of Oklahoma History and Culture, https://www.okhistory.org/publications/enc/entry.php?entry=CA004.