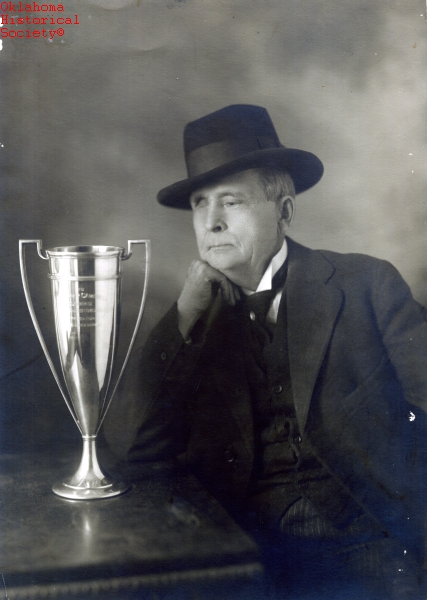 Born in St. Joseph, Missouri, on December 17, 1843, to Elisha and Nancy Dillon Campbell, William Parker Campbell moved with his parents first to Illinois and then back to Missouri, remaining there until the start of the Civil War. The family eventually moved to Nemaha, Nebraska, where Campbell began a career in frontier journalism. In 1867 he married Mollie Wayne, and the union produced six children. In 1877 Campbell founded the Wamego Tribune. While living in Kansas, he watched with interest the establishment of the Kansas State Historical Society.

In 1892 he moved to Kingfisher, Oklahoma Territory, to become Kingfisher County Deputy Register of Deeds, working under his brother J. B., who was the Register. A year later, at the meeting of the Oklahoma Territorial Press Association, he suggested the formation of an Oklahoma Historical Society (OHS). This being done in May 1893, he became the organization's first "custodian," or curator. He held that position for two years until the Territorial Legislature moved the OHS to Norman. In 1902 it moved back to Oklahoma City, and Campbell was recalled. Over the next twenty years of service his abiding passion was collecting Oklahoma history. His enthusiasm for things Oklahoman made up for his lack of formal training in museum procedures and collecting. Campbell's philosophy was "Bring it in; if the future don't want it, let the future throw it away."

To inform Oklahomans about the work of the OHS, he began publishing Historia, a popular quarterly that was the forerunner of Mistletoe Leaves, the society's newsletter. William P. Campbell died on May 4, 1924, in Oklahoma City.

The following (as per The Chicago Manual of Style, 17th edition) is the preferred citation for articles:
Bob L. Blackburn, “Campbell, William Parker,” The Encyclopedia of Oklahoma History and Culture, https://www.okhistory.org/publications/enc/entry.php?entry=CA035.