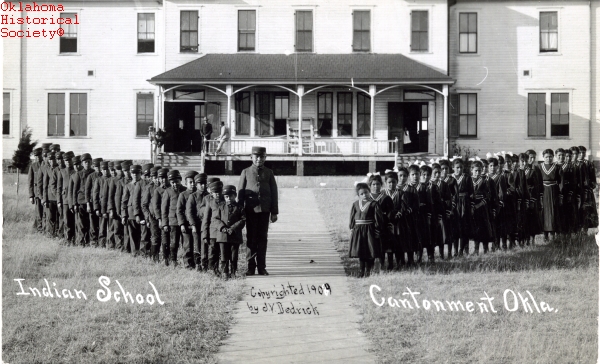 Never officially named, "Cantonment" was an army post constructed on the North Canadian River five miles northwest of present Canton, in Blaine County. ("Cantonment" is a general term used to identify temporary military fortifications.) In September 1878 a band of Northern Cheyenne had fled northward from the Cheyenne and Arapaho Reservation, causing panic among the residents of western Kansas and Nebraska. With orders to police the reservation, Lt. Col. Richard I. Dodge and four companies of the Twenty-third Infantry from Fort Leavenworth, Kansas, established Cantonment midway between Forts Reno and Supply in March 1879. Once it was decided the Northern Cheyenne would be removed from Indian Territory, Cantonment was no longer needed, and the military abandoned it in June 1882.

The troop quarters at Cantonment remained primitive, the post comprised a commissary, hospital, and officers' barracks constructed of stone. The Department of the Interior gained control of Cantonment in 1882 and allowed the Mennonites to operate the station as a school for Indian children. The Interior Department maintained a school at Cantonment beginning in 1898 and in 1903 designated the facility a subagency of the Cheyenne and Arapaho Agency at Darlington. Also known as "New Cantonment" and "Cantonment on the North Fork of the Canadian River," the site is listed in the National Register of Historic Places (NR 70000527).

Joseph B. Thoburn, 'The Story of Cantonment,' in "My Experience with the Cheyenne Indians," by Henry C. Keeling, The Chronicles of Oklahoma 3 (April 1925).

The following (as per The Chicago Manual of Style, 17th edition) is the preferred citation for articles:
Jon D. May, “Cantonment,” The Encyclopedia of Oklahoma History and Culture, https://www.okhistory.org/publications/enc/entry.php?entry=CA049.