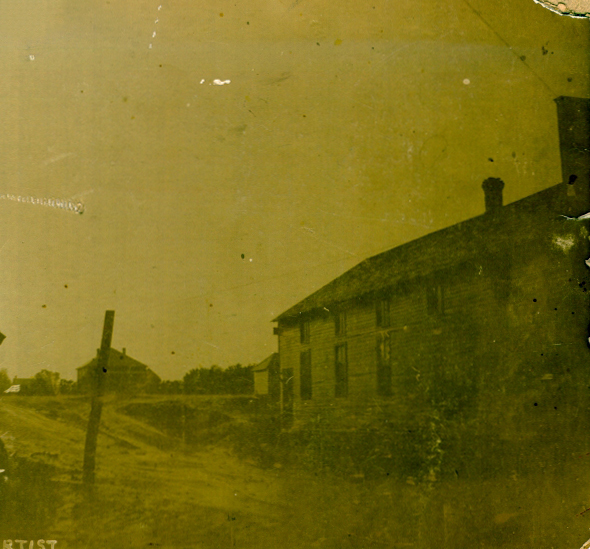 Located in McIntosh County, Checotah lies at the crossroads of U.S. Highways 69 and 266 and just north of Interstate 40. In February 1872 workers for the Missouri, Kansas and Texas Railway (MK&T) established a railhead at present Checotah, on the old Texas Road in the Creek Nation, as they built tracks southward toward the Red River. The location became "Checote Switch," named for the Creek Chief Samuel Checote. Later, a mapmaker erroneously spelled it "Checotah." As the railroad builders moved on, the first tiny depot became home for a telegraph operator and site of the community's first post office.

The fertile prairie and abundance of wildlife attracted farmers. Cotton and grain, as well as orchards, thrived. The environment also supported large herds of cattle. Soon individual shippers constructed cow pens near the depot marketed their herds. That section of land became the townsite, donated by pioneer ranchers/businessmen Judge E. H. Lerblance and W. E. Gentry. Merchants came, homes were built, and schools and churches were established around the terminal. Town boosters touted the booming community as "the gem of the prairie." In 1893 Checotah was chartered by the Creek Nation, and the Dawes Commission held its first meeting here in Lerblance Hall.

Checotah was located on the age-old game trail that later became the Texas Road. On this thoroughfare, near present Checotah, lies the Civil War's Honey Springs Battleground (the largest conflict in Indian Territory, fought July 17, 1863). The MK&T essentially followed the Texas Road as it built tracks southward. Along this same general path the federal government laid out the post–World War I international Jefferson Highway (running from Winnipeg, Canada, to New Orleans, Louisiana). The route eventually became U.S. Highway 69. That highway now intersects with Interstate 40, establishing an important crossroads of transcontinental transportation.

Following the dedication of Lake Eufaula in 1964, recreation became an important industry. Boat manufacturing joined the trucking and ranching aspect of the community's economy. Hunting, fishing, water sports, boating, and golfing generated tourist dollars. In 1970 there were 3,074 Checotah residents.

In 1982 the U.S. Department of Interior placed a four-block area of Checotah's downtown on the National Register of Historic Places (NR 82003888), one of only fifteen area listings at that time. That designation was preceded in 1970 by the listing of Honey Springs Battlefield (NR 70000848) and followed by the Methodist Episcopal Church (NR 84000462), the 1890 Katy Depot (NR 91001371), the Tabor House (NR 96000979), the Old Checotah City Hall (NR 98000733), and the 1903 Oklahoma Odd Fellows Home (NR 01000660). An important project of the Checotah Landmark Preservation Society was the purchase of the 1890 MK&T station and its relocation adjacent to U.S. 69/U.S. 266 and near Interstate 40. The depot was saved from demolition and now serves as a tourist information center housing historical artifacts of local interest.

W. E. "Dode" McIntosh, the fourth member of his family to serve as Creek chief (McIntosh County is named for these pioneers) hailed from Checotah. World War II naval hero and Checotah native Paul Henry Carr, lost at sea in the Pacific, was honored by the naming of the guided missile frigate USS Carr (FFG-5). The local library was named for Jim G. Lucas, who won the Pulitzer Prize for Journalism in 1954 and the Ernie Pyle Journalism Award in 1953 (Korean War) and 1964 (Vietnam Conflict).

In 2000 the population stood at 3,481, with a large percentage of business owners and merchants living outside the city limits. Checotah has the second largest school district, geographically, in the state (299 square miles), approximately eleven hundred pupils. The town hosts Okrafest! each September. Since 1962 the Chamber of Commerce has sponsored an Old Settlers' Day parade and Roundup Club rodeo in June, as well as a Christmas parade and residential lighting competition. Checotah hosts the annual mid-July memorial and the triennial full-battle reenactment at Honey Springs Battlefield. In the U.S. Census Checotah's 2010 population stood at 3,335.

The following (as per The Chicago Manual of Style, 17th edition) is the preferred citation for articles:
Checotah Landmark Preservation Society, “Checotah,” The Encyclopedia of Oklahoma History and Culture, https://www.okhistory.org/publications/enc/entry.php?entry=CH011.