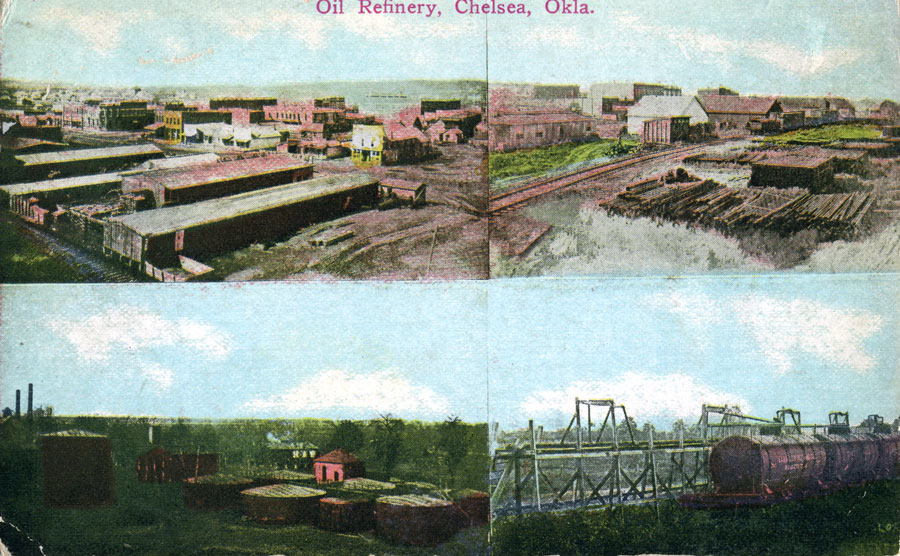 The northeastern Rogers County community of Chelsea lies at the intersection of State Highways 28 and 66 (historic Route 66), nineteen miles northeast of Claremore, the county seat, and forty-seven miles northeast of Tulsa. Chelsea began as a stop on the Atlantic and Pacific Railroad (later the St. Louis and San Francisco Railway) in 1881. Railroad official Charles Peach named the site for his native Chelsea, England. A Chelsea post office was established in November 1882, and the town was incorporated under the law of the Cherokee Nation, Indian Territory, in 1889. The United States Townsite Commission surveyed and platted Chelsea in 1902.

Historically, Chelsea's economy has been based on ranching, farming, and the petroleum industry. In 1889 the United States Oil and Gas Company drilled the first oil well in what became known as the Chelsea-Alluwe field, situated southwest of Chelsea. Local production boomed during the early 1900s and peaked circa 1916. Chelsea was known as a center for cattle raising and hay shipping before 1907 statehood. Principal crops included oats, corn, wheat, and pecans. Coal was mined nearby starting in 1960.

One of Chelsea's original industries was a flour mill built circa 1892. The Bank of Chelsea, reportedly the first state bank in the Indian Territory, opened in March 1896. During the early 1900s brick streets were laid in the shape of a spoked wheel, with downtown Chelsea as the hub. Local newspapers included the Chelsea Commercial and the Reporter. In spring 1928 the town served as the halfway point for the Bunion Derby, a transcontinental footrace won by Andy Payne of nearby Foyil, Oklahoma. Chelsea had a population of 566 in 1900 and 1,249 in 1907. That number increased to 1,692 in 1920, fell to 1,437 in 1950, and rose to 1,754 in 1970.

In 2000 the Chelsea School District enrolled 1,122 students. The town supported three churches, a public library, one FM radio station, and a weekly newspaper, the Chelsea Reporter. The nearest hospitals were located at Nowata and Claremore. Local properties listed in the National Register of Historic Places are the Hogue House (NR 82001498) and the Chelsea Hotel (NR 04000525). Ralph Terry, who pitched for the New York Yankees (1956–57, 1959–64) and for three other major league baseball teams, and U.S. Rep., Oklahoma State Senator, and award-winning rodeo announcer Clem McSpadden were Chelsea residents. Area attractions include McSpadden Park. In 2000 Chelsea had 2,136 residents and eighty-three businesses, and the population stood at 1,964 in 2010, according to the U.S. Census.

The following (as per The Chicago Manual of Style, 17th edition) is the preferred citation for articles:
Donna Casity McSpadden, “Chelsea,” The Encyclopedia of Oklahoma History and Culture, https://www.okhistory.org/publications/enc/entry?entry=CH013.