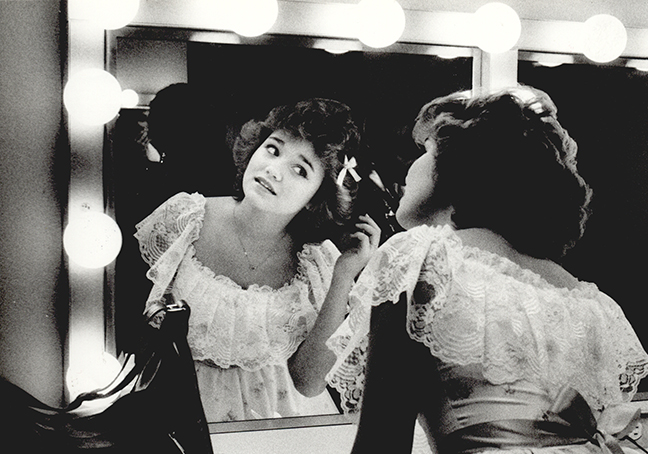 Actor and singer Kristin Chenoweth was born on July 24, 1968, in Broken Arrow, Oklahoma. Junie Smith and Jerry Morris Chenoweth adopted her when she was five days old. At an early age Kristin Chenoweth sang gospel songs at local churches, and at age twelve she performed a solo at the Southern Baptist Convention held in Norman, Oklahoma. While attending Broken Arrow High School, she participated in school plays. After graduating from high school in 1986, she attended Oklahoma City University (OCU), where she earned a bachelor's degree in musical theater and a master's degree in opera performance. Her voice coach was Florence Birdwell, who had studied under the internationally known and OCU instructor Inez Silberg. Chenoweth entered beauty pageants, won the title of Miss OCU, and was second runner-up in the 1991 Miss Oklahoma pageant.

Chenoweth made her Broadway debut as Hyacinth in Scapin in 1996. She appeared in other on- and off-Broadway theater productions including Animal Crackers in 1993, Steel Pier in 1997, A New Brain in 1998, and Epic Proportions in 1999. In 2004 Chenoweth portrayed Glinda, the good witch of the North, in Wicked, a Broadway musical about the early years of the witches of Oz. For that performance she was nominated for a Tony Award as best leading actress in a musical.

In addition to stage Chenoweth has appeared in films and on television. She has recorded several albums and performed at Carnegie Hall and at the Metropolitan Opera. Her film credits include Bewitched (2005) and The Pink Panther (2006). Chenoweth was the voice of Rosetta in three children's films about Tinker Bell produced between 2008 and 2010. Her career has led to starring roles in television series such as The West Wing, Glee, and The Good Wife. In 2001 Chenoweth had her own short-lived television series titled Kristin, which wasloosely based on her life.

Throughout her diversified career Chenoweth has achieved numerous honors and awards. In 1999 she won a Tony Award for best featured actress for her portrayal of Sally Brown in the Broadway musical You're a Good Man, Charlie Brown. Nine years later she was nominated for an Emmy for her performance as Olive Snook in the comedy-drama television series Pushing Daisies. She was inducted into the Oklahoma Hall of Fame in 2010 and into the Oklahoma Music Hall of Fame in 2011. On May 11, 2013, she accepted an honorary doctorate of humane letters from OCU.

The following (as per The Chicago Manual of Style, 17th edition) is the preferred citation for articles:
Linda D. Wilson, “Chenoweth, Kristin Dawn,” The Encyclopedia of Oklahoma History and Culture, https://www.okhistory.org/publications/enc/entry.php?entry=CH068.