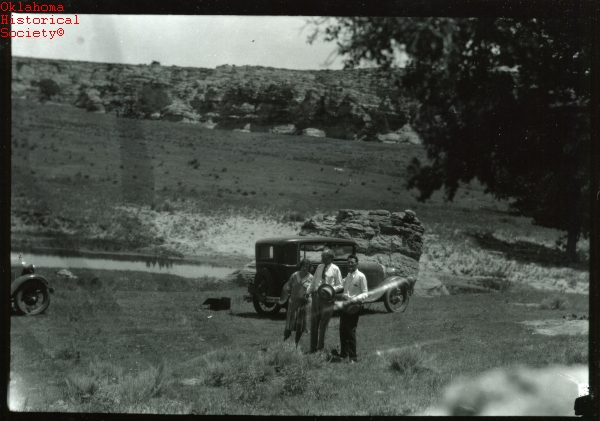 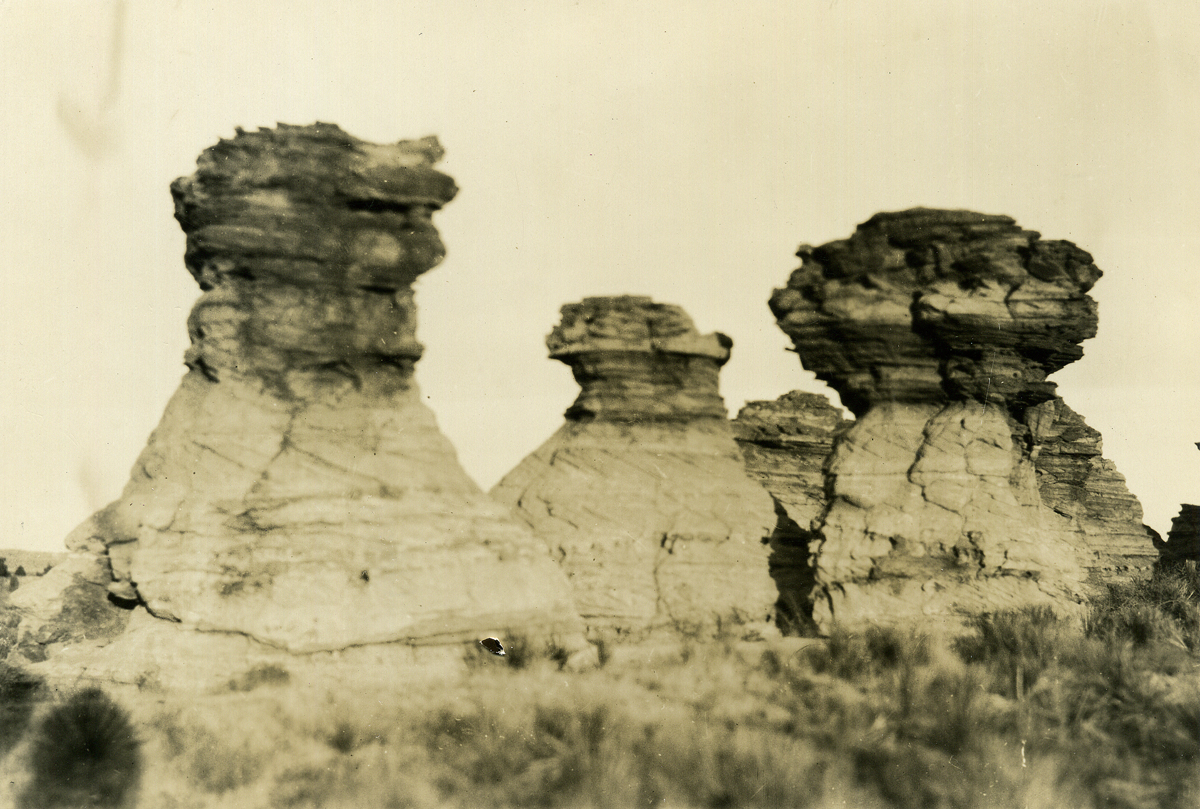 Covering a total land and water area of 1,842.2 square miles, Cimarron County is the farthest west of the three Oklahoma Panhandle counties. Black Mesa, in the northeastern corner of the county, is the highest point in Oklahoma, rising to 4,972.97 feet above sea level. In the county's northern portion the Cimarron River flows eastward turning north into Kansas, and the North Canadian, or Beaver River, traverses the county's southern section. Cimarron is the only county in the United States that touches five states: Kansas, Colorado, New Mexico, Texas, and its own, Oklahoma. Kenton, in the far northwestern corner, is the only Oklahoma community on Mountain Time. The county is served by U.S. Highways 56/65/412 east and west and 287/385 north and south. State Highway 3, 95, and 325 also traverse the county. Only Boise City and Keyes are incorporated.

In the Black Mesa area numerous dinosaur tracks and fossils have been discovered, including examples of brontosaurus, camptosaurus, stegosaurus, and ceratosaurus. The area's paleontological history is commemorated on State Highway 325 east of Kenton, where a replica of a brontosaurus femur sits on a pedestal outside a dinosaur quarry. Also located near Kenton, the Kenton Caves contained artifacts that represent thousands of years of area occupation. A few of the finds include rock art, projectile points, potsherds, seeds, storage bags, cloth, shell jewelry, the desiccated body of a child, and other items. One of the last precontact groups to live in the area would have been the Antelope Phase Culture (between 1200 and 1500 A.D.). Francisco Vásquez de Coronado may have crossed the county on his return trip from Quivira in Kansas. At Castle Rock, a publicly inaccessible, controversial landmark, the explorer (or more likely a member of his party) may have been the one who inscribed the words "Coronatto 1541" into the stone. Autograph Rock, northwest of Boise City, is a well-documented feature of the famed Cimarron Cutoff of the Santa Fe Trail, which transects Cimarron County. On the rock face are more than three hundred signatures dating from the early nineteenth century into the twentieth century. Cold Spring and Inscription Rock Historic District were listed in the National Register of Historic Places in 1994 (NR 94000317).

Prior to the Oklahoma Organic Act of May 2, 1890, there was no law in No Man's Land, also called the Public Land Strip (now known as the Oklahoma Panhandle), and scant population in what later became Cimarron County. Of the inhabitants, some were felons searching for places to avoid the law, a few were sheep ranchers from New Mexico Territory, and several were cattle ranchers from surrounding states. There were no schools in the county and only one post office, Mineral City, before 1890.

In 1890 the entire Public Land Strip became Beaver County, Oklahoma Territory, and in that year the United States conducted the first census. Only two communities in the area, Carrizo (just over the line, in New Mexico Territory) and Mineral City, had enough residents to bother enumerating. Carrizo claimed eighty-three inhabitants and Mineral City ninety-eight. According to that census, the two earliest citizens, John Threldkell, from Kentucky, and Charles Grammar, a German immigrant, had been there since 1873. Earlier, a prominent New Mexican sheep-herding family, the Bacas, ran sheep in the county. A few of their pastores, including Juan Cruz Lujan, continued sheep ranching in Cimarron County into the twentieth century.

At 1907 statehood Cimarron County was created, and within it were twenty post offices and fifty-six schools. In 1908 the Southwestern Immigration and Development Company of Guthrie, Oklahoma, composed of J. E. Stanley, A. J. Kline, and W. T. Douglas, established the town of Boise City. Several communities fought for the county seat designation, including Boise City (approximately in the center of the county), Cimarron (three miles north of Boise City), Doby (five miles northwest of Boise City), Hurley (five miles northeast of Boise City), Willowbar (twelve miles east of Boise City), and Centerview (location unknown). Rail access arrived relatively late. The Elkhart and Santa Fe Railway completed a line from Elkhart, Kansas, into the county in 1925 and on into New Mexico in 1932, but service ended in 1942. The same corporation completed tracks from Colorado to Boise City in 1931 and south to Texas in 1937. Operated as part of the Atchison, Topeka and Santa Fe Railway system, by 2000 the remaining line was part of the Burlington-Northern Santa Fe system.

Until the county seat election of June 11, 1908, Kenton, which had previously been named the temporary county seat, held the county records. Boise City won a runoff election over Doby to capture the designation. A Boise City contingent soon confiscated the county seat papers, prior to the end of the mandatory thirty-day waiting period, creating a controversy and a local legend that Boise City stole the courthouse.

Agriculture and cattle ranching remained the economic base throughout the twentieth century. Wheat and grain sorghum were important crops. After the area recovered from the 1930s devastating dust storms that centered in the Panhandle, the wheat harvest rose to a high of 4.7 million bushels in 1980; grain sorghum also peaked in 1980 at 4.6 million bushels. There were 481 farms in 2000, involving 1,077,004 acres of land. In the 1950s the county earnestly commenced natural gas and oil extraction, with 7,411,981 barrels of oil and 1,316,791,103 cubic feet of natural gas produced between 1979 and 1993. In 1959 a large extraction plant at Keyes began taking advantage of rich helium gas deposits beneath the area. Cimarron County's per capita income in 2000 was $22,907, ranking ninth of the seventy-seven Oklahoma counties.

Historical and natural points of interest attract tourists to Cimarron County. Traces of the Santa Fe Trail can be seen at many locations. The remnants of Camp Nichols, a historic military site, is listed in the National Register of Historic Places (NR 66000628) and is a National Historic Landmark. Col. Christopher "Kit" Carson established the camp in 1865 to protect the Cimarron Cutoff. The lack of law enforcement in No Man's Land attracted several outlaws, and one such group, led by William Coe, reportedly built a rock building on top of a strategically situated mesa that became known as Robbers' Roost. Lake Carl Etling, inside the Black Mesa State Park, Rita Blanca National Grassland, and numerous mesas attract many hikers and outdoors enthusiasts to the area. The Cimarron Heritage House in Boise City interprets the county's history. Actor Vera Miles was born in Boise City, and western movie hero Jack Hoxie moved to Keyes after he retired from the film industry.

William E. Baker, "A History of Cimarron County," The Chronicles of Oklahoma 31 (Autumn 1953).

The following (as per The Chicago Manual of Style, 17th edition) is the preferred citation for articles:
Norma Gene Young, “Cimarron County,” The Encyclopedia of Oklahoma History and Culture, https://www.okhistory.org/publications/enc/entry.php?entry=CI003.