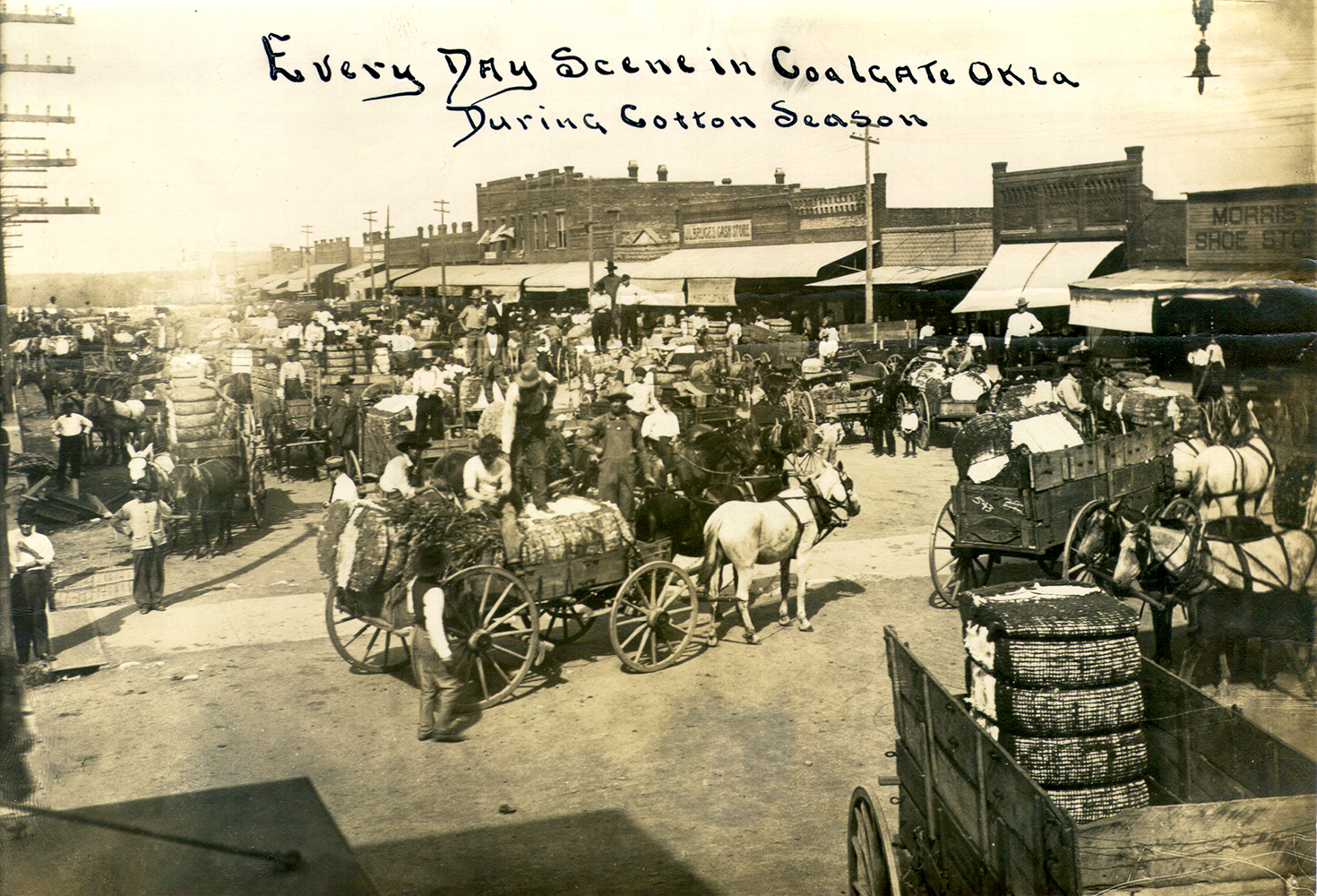 Originally known as Liddle and located in the Pushmataha District of the Choctaw Nation, Coalgate, the county seat of Coal County, is situated at the intersection of U.S. Highway 75 and State Highway 31. The town began as a coal-mining camp in 1889. In the fall of 1888 William "Bill" Liddle, a superintendent for the Atoka Coal and Mining Company, was sent to locate the site for a new mine. He placed a pile of stones to mark Number One slope mine, approximately where the county courthouse stood at the turn of twenty-first century. A tent city sprang up, and the company built houses west of the site along what became Main Street. The Southwestern Coal and Improvement Company, a subsidiary of the Missouri, Kansas and Texas Railway (MK&T), developed the coal site. Work started on January 2, 1889, and the first shipment of coal left Liddle on April 17, 1889. By 1899 Coalgate had eight operating coal mines and shipped daily twenty-eight carloads of coal.

The town's name was changed from Liddle to Coalgate on January 23, 1890. A popular legend holds that the town was named after Colgate Hoyt, a MK&T director. Apparently, however, the name was taken from the steel gate or "coal gate" that separated the trains from the coal mines north of town.

Coalgate was incorporated under the laws of Arkansas on November 25, 1898, and Peter Hanraty served as the first mayor. The town site was surveyed, and the plat was approved by the secretary of the interior on December 16, 1903. After 1907 statehood a special election was held on June 2, 1908, for the purpose of relocating the county seat from Lehigh to Coalgate. Although only 2,329 voters were registered in Coal County, 2,544 ballots were cast. Coalgate carried the election by a margin of sixty-eight votes. The city approved a sixty thousand dollar bond issue in 1909 for construction of a new county courthouse and jail. A charter was drawn up and approved on June 16, 1914.

Coalgate was a thriving, prosperous city for the first two decades of the twentieth century. The economy was based on coal until the early 1920s, when the coal mines were closed by organized union strikes. A boll weevil infestation followed, destroying the cotton crops. Although five Coal County banks failed in 1923, the First National Bank in Coalgate remained open until January 1924. Between 1923 and 1940 rail service ended. In 1929 the Lane Drug Store, one of Coalgate's oldest businesses, closed its doors. Other businesses failed in the wake of the Great Depression.

Coalgate held on through the Great Depression years and saw a brief period of growth and prosperity in the late 1930s. In August 1937 the federal government approved the plans for a post office, which was completed in the early 1940s at a cost of $51,700. New Deal programs such as the Civilian Conservation Corps (CCC), National Youth Administration (NYA), and Works Progress Administration (WPA) helped Coalgate's economy. In 1939 the WPA built the Coalgate High School gymnasium (listed in the National Register of Historic Places, NR 88001382). The NYA building was constructed during the late 1930s and was purchased by the American Legion in 1944.

World War II gave a temporary boost to the coal industry. In 1952 Coalgate citizens devoted their energies to building the first hospital, located on north Main Street. The Ruth Wilson Hurley Manor, a forty-bed nursing home, was constructed on the old Lee Grade School grounds in 1957 and named for U.S. Secretary of War Patrick Hurley's wife, who was born near Coalgate. In 1957 the Chamber of Commerce succeeded in locating the Blue Bell Clothing factory in Coalgate. Four years later a new hospital was built. The Coalgate Housing Authority, organized in 1965, planned and completed two major housing projects between 1969 and 1978. Sporadic growth continued through the 1980s with the addition of several retail outlets.

Coalgate's population stood at 818 in 1890, peaked at 3,255 in 1910 and declined to 2,064 by 1930 and to 1,984 in 1950. Over the next several decades it fluctuated between seventeen hundred and two thousand. The count stood at 2,005 at the turn of the twenty-first century, and the 2010 census counted 1,967. The Coal County Mining and Historical Museum preserved artifacts and historic photographs of the bygone era.

The following (as per The Chicago Manual of Style, 17th edition) is the preferred citation for articles:
Orville Verdell Clark, “Coalgate,” The Encyclopedia of Oklahoma History and Culture, https://www.okhistory.org/publications/enc/entry.php?entry=CO007.