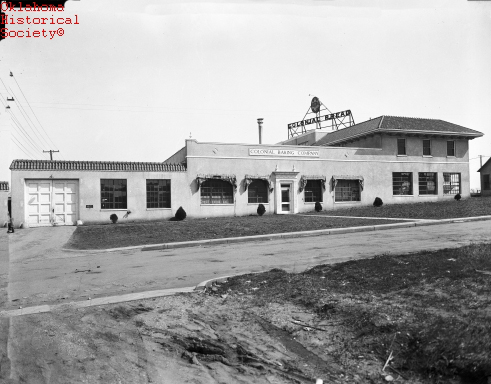 In 1928 Carl Skogsberg opened the Colonial Bakery in Oklahoma City, with Skogsberg and the Campbell-Taggart Company holding most of the stock. Campbell-Taggart had been organized in 1925 in Kansas City, Missouri, by Win Campbell, who was joined by A. L. Taggart in 1928. The Oklahoma City plant operated under the Campbell-Taggart national umbrella of independently owned bakeries that produced brand names such as Rainbo, Colonial, Holsum, and Betsy Ross. By 1929 the company oversaw nineteen of these bakeries.

In a 1928 advertisement Skogsberg claimed that new three-hundred-thousand-dollar bread plant was "Oklahoma's most modern bakery." In 1935 and 1941 Skogsberg expanded the operation, which employed eighty-five people in 1941. On September 9, 1949, Carl Skogsberg died at the age of fifty-five, and Harold Tice succeeded Skogsberg as Colonial president. In 1958 the Colonial Baking Company changed its bread recipe and its name to Rainbo. By this time employment had increased to 150, and the plant owned fifty trucks.

In the mid-1970s Campbell-Taggart introduced the Earthgrains line of products, which eventually became the company's new name. In 1982 Anheuser-Busch acquired the national franchise and in 1996 released it as the independent, publicly traded Earthgrains Company. In 2001 Sara Lee bought Earthgrains, creating the nation's second-largest fresh bread company. The Oklahoma City plant prospered through the twentieth century, surviving unionization and strikes, competition with the Continental Bakery and their Wonder Bread product, the Great Depression, and a changing market. In 2004 the bakery was still in operation on North Broadway in Oklahoma City.

Howard Meredith, "Carl W. Skogsberg and the Beginning of Colonial Bakery," The Chronicles of Oklahoma 64 (Fall 1986).

The following (as per The Chicago Manual of Style, 17th edition) is the preferred citation for articles:
Larry O'Dell, “Colonial Bakery,” The Encyclopedia of Oklahoma History and Culture, https://www.okhistory.org/publications/enc/entry.php?entry=CO030.