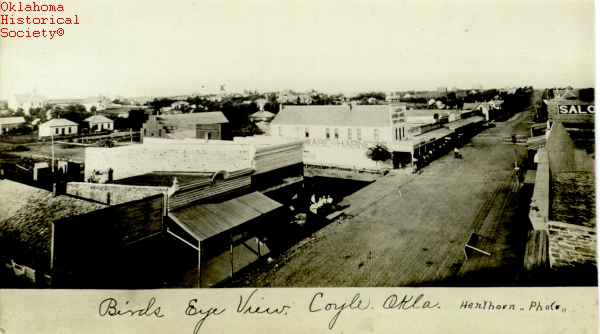 The town of Coyle began as an agricultural community in North Cimarron Township in northeastern Logan County. Situated on State Highway 33, Coyle is fourteen miles northeast of Guthrie, one mile east of the Indian Meridian, and one mile west of the confluence of Fitzgerald Creek and the Cimarron River. The town was founded in 1899 when the Eastern Oklahoma Railway (later the Atchison, Topeka and Santa Fe Railway) built a branch line from Guthrie to Cushing. Guthrie entrepreneur William H. Coyle and U. C. Guss were purchasing agents for the railroad right-of-way. As a bonus for their work they were allowed to select and to plat a town site along the route. They chose a location two miles southeast of Iowa City, a town established in 1891 on the Cimarron River during the opening of the Iowa, Sac and Fox, Kickapoo, Absentee Shawnee, and Citizen Band Potawatomi lands. Iowa City residents moved en masse to the new town site when the railroad bypassed their town. They applied for a post office for Iowa City; however, their application was denied because a post office with that name already existed. Consequently, they made application for a post office named Coyle, which was established on May 5, 1900.

Cotton was the staple crop. Early-day businesses included a bank, a blacksmith, cotton gins, a drug store, a furniture store, general stores, a lumberyard, and a photographer. In the first year of Coyle's existence its civic leaders planted elm and maple trees along the main streets. After they matured, Coyle enjoyed the reputation of being a city with majestic trees lining its thoroughfares. At one of the first cotton carnivals held in the fall, Oscar Lee Brown, a Spanish-American War veteran, married Fannie Weldon. During the public ceremony they stood atop a platform of cotton bales. They claimed one hundred dollars plus numerous merchandise prizes provided by town merchants.

Prior to 1907 statehood Coyle had two saloons. After temperance crusader Carry Nation made a visit in 1904 and engaged in a debate with the Coyle Superintendent of Schools Martin E. Trapp, the saloons were closed. After World War I ended, worldwide demand for cotton steadily declined. The Great Depression followed in the 1930s. Both events affected Coyle. Many area farmers sold their farms and relocated, but others pursued new occupations. A brief resurgence in a demand for cotton during World War II had little effect on Coyle, as farmers who had held on to their acreage were able to meet the new production quotas. During the 1950s and 1960s Coyle received some public attention as the result of Mildred Anderson's marriage to Bob Considine, a news reporter and coauthor of The Babe Ruth Story and Thirty Seconds over Tokyo. He often mentioned that his wife was from Coyle, Oklahoma. Anderson was born circa 1908 in Coyle; her father was a pharmacist.

Throughout its existence Coyle has maintained a steady population; the 1910, 1920, and 1930 census recorded slightly more than four hundred living there. Afterward, Coyle reached a high of 440 in 1940 and declined to a low of 289 in 1990. The 337 inhabitants counted by the 2000 census were only thirty-two more than the 305 souls counted at 1907 statehood. Coyle was served by the Cimarron Valley Clipper, published from 1900 to 1949. At the turn of the twenty-first century 95 percent of the working residents commuted to Stillwater, Guthrie, and Oklahoma City. In 2010 the U.S. Census recorded 325 living there.

Who's Who in Logan County: The People and Enterprises Who Have Made Logan County (Guthrie, Okla.: Cooperative Publishing Co., 1927).

The following (as per The Chicago Manual of Style, 17th edition) is the preferred citation for articles:
Thomas L. Hedglen, “Coyle,” The Encyclopedia of Oklahoma History and Culture, https://www.okhistory.org/publications/enc/entry.php?entry=CO081.