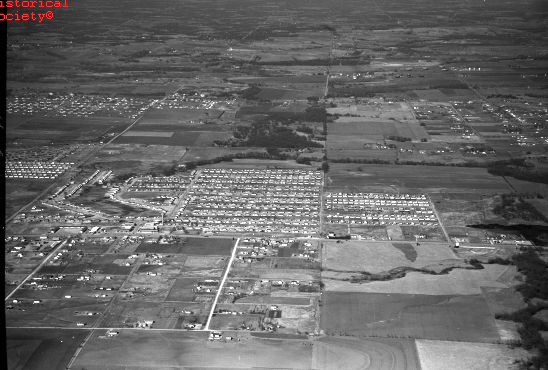 Founded as a "bedroom" community in Boone Township, Oklahoma County, Del City lies three miles east of Oklahoma City and one mile west of Midwest City. At the turn of the twenty-first century Del City was a seven-and-one-half-square-mile community surrounded on the north, west, and south by Oklahoma City and on the east by Midwest City. Interstate Highway 40 bisects the town from the northwest to southeast. Oklahoma City streets define the boundaries: Northeast Tenth Street on the north, Sooner Road on the east, Southeast Forty-fourth Street on the south, and Bryant Road on the west. The city's northwestern corner is a mile from the junction of Interstate 35 and Interstate 40, justifying its claim to being "the Crossroads of America."

In 1946, George I. Epperly, a Capitol Hill home builder, purchased the first 160 acres at the corner of Southeast Twenty-ninth Street and Sunny Lane Road, an unincorporated area of Oklahoma County. He planned to build fifty houses strategically located between the two major cities where jobs were available. Epperly correctly surmised that the one thing most American families wanted was to own their own home. He used precut, subassembled housing units to keep his costs down and accelerate building time. The first was ready for occupancy in January 1947. The remaining forty-nine were purchased so quickly that many families moved in before the finish carpentry was completed. By July 30, 1948, there were two hundred families living in the area, and Epperly decided it was time to incorporate the town, which he had named Del City after his eldest daughter, Delaphene. There was some opposition. Finally, on October 9, 1948, Del Citians voted to approve incorporation and elected a Board of Trustees. In 1949 Epperly was recognized by the National Association of Home Builders for Del City's "soundness of design and construction, and suitability of the project to its location."

Del City's growth is a product of successful negotiation. Oklahoma City, in particular, was resentful of the Midwest City's establishment in 1943 and did not want to see another competitor on its east side. Edward Carter, another Oklahoma City area home builder, purchased land at Southeast Fifteenth Street and Sunny Lane Road in 1947 and built and incorporated Carter Park. In 1951 Del City offered to annex Carter Park to save it from annexation by Oklahoma City. The offer was rebuffed. Carter Park then annexed the unincorporated Mansfield Addition, doubling its size. Del City officials persevered, and in 1954 a merger agreement was reached allowing Del City to absorb Carter Park. In 1958 the scenario was repeated with Midway Village. The initial offer was turned down, but in 1963 an agreement allowed Del City to absorb Midway Village. The final piece of the city was acquired when Del City annexed undeveloped land between itself and Tinker Air Force Base. Oklahoma City annexed the same piece of land, and a court fight ensued. Del City won in District Court, and Oklahoma City appealed to the State Supreme Court. While awaiting the hearing, Del City officers pursued negotiation again, and Oklahoma City accepted twenty acres along the Tinker AFB boundary. In 1964, having expanded to its greatest possible physical limits, Del City joined Midwest City and Norman in underwriting the Little River Reservoir Project (Lake Thunderbird).

In 1975 the Del City Historical Society was organized with Andy Evans as its first president. The citizens of Del City wanted to learn about their heritage. Fortunately, several children of Eighty-niners (89ers) still lived in the area, and they identified every original homestead within the city limits. Residents also learned that their town was on the path of the Arbuckle Trail, a Texas to Kansas cattle trail of the 1870s. Of more recent acclaim, wrestler and two-time Olympic Gold Medal winner John Smith resided in Del City.

With the founding focus on home building and family-oriented amenities, Del City was slow to develop any industry to create jobs (99 percent of Del Citians commuted to work in 1948, but only 96 percent commuted in 2000). Two businesses of long standing are Don's Alley Restaurant and Midwest Trophy Manufacturing. Don Moore opened his hamburger grill at 4601 Southeast Twenty-ninth Street in 1955 and in 2007 still served food there. Midwest Trophy Manufacturing, located at 3405 Southeast Twenty-ninth Street, began in Dave Smith's garage in Del City in 1971. At the turn of the twenty-first century it employed eight hundred people throughout North America, four hundred of them in Del City. It is the city's largest industry.

The following (as per The Chicago Manual of Style, 17th edition) is the preferred citation for articles:
Thomas L. Hedglen, “Del City,” The Encyclopedia of Oklahoma History and Culture, https://www.okhistory.org/publications/enc/entry.php?entry=DE008.