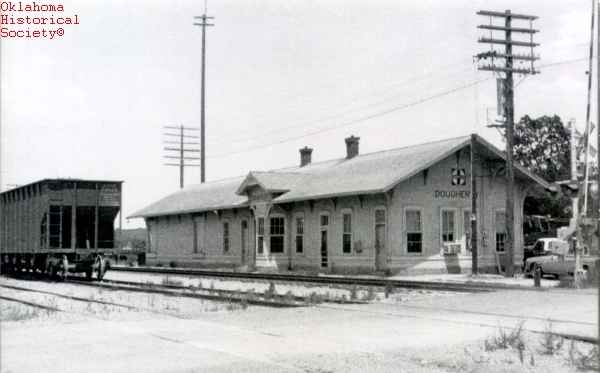 In Murray County the community of Dougherty lies at the southern terminus of State Highway 110, seventeen miles southwest of Sulphur and thirty-six miles north of Ardmore. Situated near the Washita River in the Arbuckle Mountains, Dougherty was originally known as Henderson Flat, then as Strawberry Flat. Circa 1887 the settlement was renamed in honor of William Dougherty, a Gainesville, Texas, banker.

The Thomas W. Johnson family acquired and established a residence on the present town in 1880. They were subsequently joined by Mazeppa Turner, a rancher and namesake of nearby Turner Falls. The Gulf, Colorado and Santa Fe Railway, an Atchison, Topeka and Santa Fe Railway subsidiary, reached the settlement in 1887, and the Dougherty post office was established that same year. A Masonic lodge was chartered in 1889, and the town had a population of about 103 in 1890.

Dougherty's early economy was based on ranching, farming (the town had two cotton gins in the mid-1890s), and mining. In 1895 approximately 550 workers were employed extracting asphalt from area mines. In 1899 Dougherty incorporated as a community of Tishomingo County in the Chickasaw Nation, Indian Territory. The town's earliest church was built in 1899, and its first school opened in 1908. The Arbuckle News, Dougherty's only newspaper, was published from 1909 to 1911. A sand and gravel pit was opened north of town in 1917. Dougherty's population declined from 437 in 1900 to 278 in 1910, increased to 405 in 1920, and dropped to 371 in 1930.

The local mining industry remained operational during the Great Depression. From the early 1920s until the mid-1940s production exceeded one million tons of gravel and sand and three million tons of rock asphalt. However, activity slowed during the 1960s. Dougherty's population peaked at 464 in 1940 and then fell from 341 in 1950 to 138 in 1990.

In 2000 Dougherty had 224 residents and four businesses, including a mining operation and two retail trade establishments. As Dougherty is located near the Chickasaw National Recreation Area, tourism has provided an additional source of revenue. The community lacked stable management until a city council was elected in the 1950s. At the end of the twentieth century it maintained a town form of government. The 2010 population registered 215.

The following (as per The Chicago Manual of Style, 17th edition) is the preferred citation for articles:
Jon D. May, “Dougherty,” The Encyclopedia of Oklahoma History and Culture, https://www.okhistory.org/publications/enc/entry.php?entry=DO008.