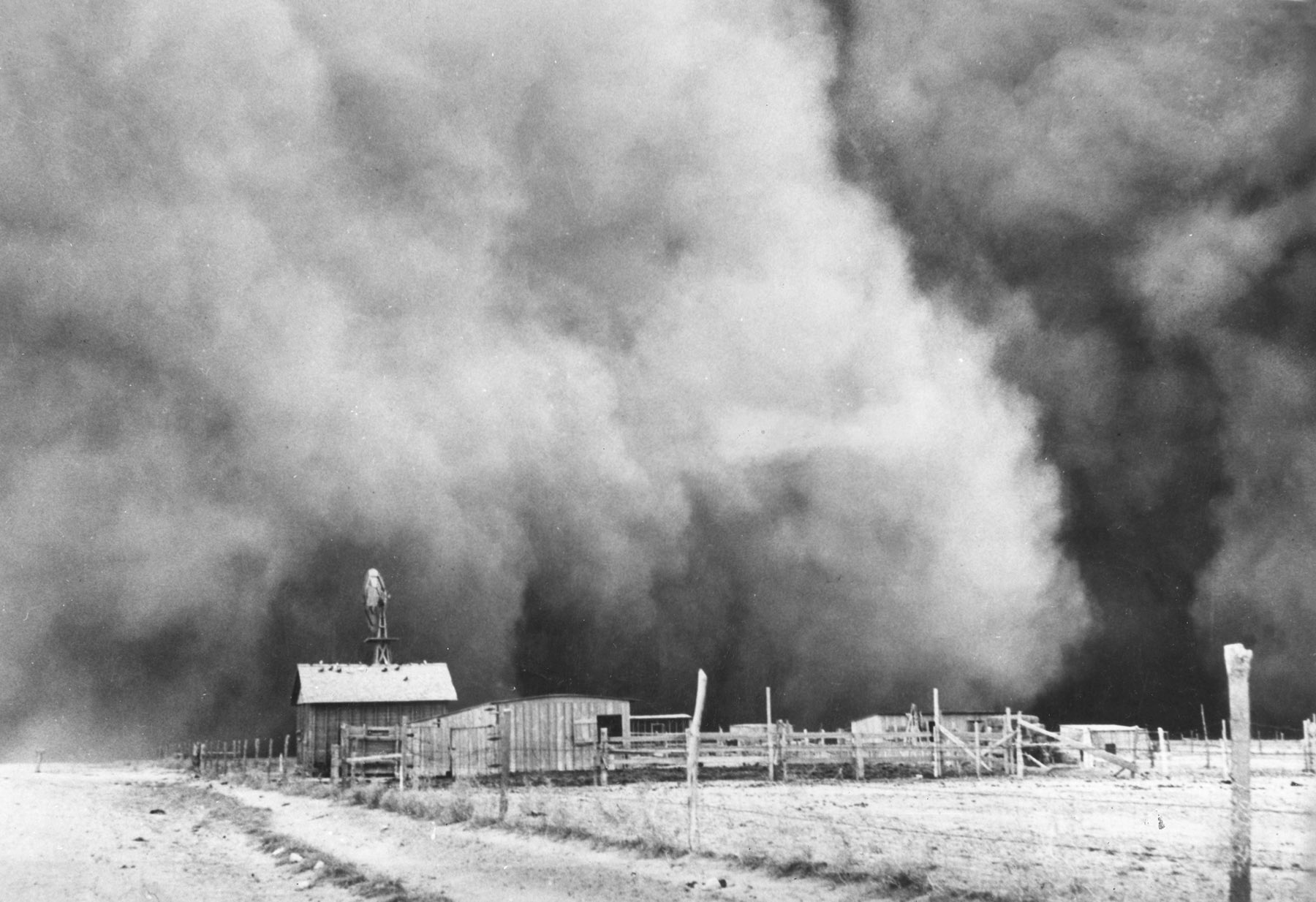 Throughout the southern High Plains temperatures fell more than fifty degrees in only a few hours as winds as high as seventy miles an hour blew black soil from Canada and northern plains states. Total darkness lasted for forty minutes and was followed by three hours of partial darkness. The relative humidity decreased to less than 10 percent. As the nation had become aware of the dust storms, journalists such as Associated Press staff writer Robert Geiger were in Guymon writing a series of articles. In his April 15 release for the Washington, D.C., Evening Star he wrote, "Three little words—achingly familiar on a Western farmer's tongue—rule life today in the dust bowl of the continent. If it rains."

For various reasons, the word "Oklahoma" quickly became synonymous with the term "dust bowl." In truth, Texas and Cimarron counties, in the heart of the Dust Bowl, suffered the worst damage, most severe storms, and most dramatic sand drifts. Coincidentally, when Geiger first placed the term "dust bowl" in print in April 1935, and when other journalists reported the "Black Easter" storm, their datelines stated "Guymon, Oklahoma." This geographical reference firmly planted the Oklahoma–Dust Bowl connection in the public mind.

Guthrie also wrote songs about the Dust Bowl migrants, and most of them actually were from Oklahoma, but not from its Panhandle–Dust Bowl area. Examples are "Tom Joad" and "Do-Re-Mi." Mostly cotton farmers from eastern and southern Oklahoma, Guthrie's migrant heroes were sharecropper and tenant farmers forced off the land by improved mechanized farm equipment, extremely low prices for cotton, and the Great Depression. Moreover, because the New Deal's crop reduction program paid the farms' owners to plow under their land, the sharecroppers and tenants who had actually worked the land were made homeless and became migrants.

Sayings and stories about Oklahoma weather, as well as Guthrie's songs and John Steinbeck's novel The Grapes of Wrath, helped perpetuate Oklahoma's Dust Bowl image. Some of the more critical statements included "Oklahoma has four seasons, often within the same week." Stories circulated that even with all the doors and windows closed the dust was so thick that a strong light bulb "looked like a cigarette burning and you couldn't see your hand before your face." One story claimed that a man's car was stalled by the sand; when he opened the door, he shot ground squirrels overhead tunneling for air. The wind velocity was so wicked that one man said, "You can fasten a logchain to a fence post or tree, and if it isn't blowing straight out, it is a calm day." Some people said that farmers were advised not to rotate their crops, for the wind would do it for them. Folks referred to dust storms as "Oklahoma rain." Women would hold their pans up to a keyhole and let the wind and sand clean them. It was so dry for so long that frogs could not learn to swim and would drown when put in water. Some said, truthfully, that "the wind blew the farm away, but we didn't lose everything—we still got the mortgage."

The following (as per The Chicago Manual of Style, 17th edition) is the preferred citation for articles:
Guy Logsdon, “Dust Bowl Lore,” The Encyclopedia of Oklahoma History and Culture, https://www.okhistory.org/publications/enc/entry.php?entry=DU012.