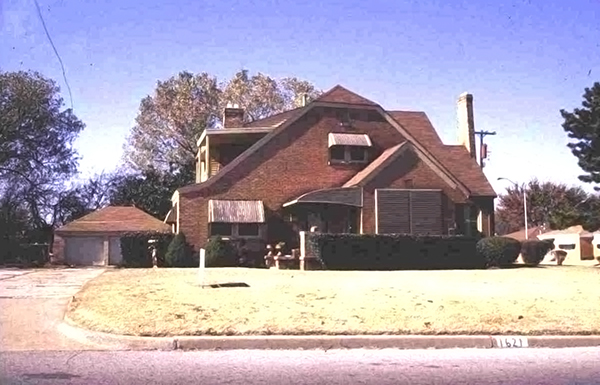 Born in Maston, Mississippi, on March 23, 1891, Walter Edwards acquired only a fourth-grade education. He came to Wellston, Oklahoma, in 1907 and in 1915 moved to Oklahoma City and worked as a laborer in a junkyard. Within fifteen years he owned a baggage-hauling company, a carpet business, an iron foundry, and two drive-in gasoline stations. Losing everything in the Crash of 1929, he recouped his fortune by selling scrap iron via Edwards Scrap Iron and Junk Yard, later called American Iron and Metal. His enterprises, which expanded to include a taxi line, an auto repair shop, and pharmacies, employed hundreds of persons. In 1930 Edwards married Frances Gilliam Waldrop, a South Carolina–born teacher, bookkeeper, and real estate dealer who came to Oklahoma through Texas. The Edwards family included two sons and five daughters.

From 1907 through the 1930s Oklahoma City had enforced an ordinance restricting African American residents to a small area of town. By 1940 the black population had reached nearly twenty thousand in the segregated district. Although declared unconstitutional in 1936, the ordinance remained in force. In 1937 Edwards Real Estate Investment Company purchased thirty-three acres in northeast Oklahoma City and had it platted by C. T. Hassman, a white resident of Tuttle, in order to skirt the segregation ordinance. There the Edwardses sold to black homeowners, effectively ending residential segregation. In 1939 Edwards persuaded the Federal Housing Authority to approve mortgage loans for black persons, an unheard-of practice.

The Edwardses donated land for a public park and elementary school, built Edwards Memorial Hospital, and created a nearby shopping center. In 1940 Walter Edwards won the National Negro Business League's coveted Spaulding Award, given to its most outstanding member. He also served as president of the Negro Chamber of Commerce. The Edwards's own home was placed on the National Register of Historic Places in 1994 (NR 94001084), and their housing addition was listed as Edwards Historic District in 1996 (NR 96001028). Preceded in death by Frances in May 1958, Walter Edwards died April 25, 1972, in Oklahoma City.

The following (as per The Chicago Manual of Style, 17th edition) is the preferred citation for articles:
Dianna Everett, “Edwards, Walter J.,” The Encyclopedia of Oklahoma History and Culture, https://www.okhistory.org/publications/enc/entry.php?entry=ED012.