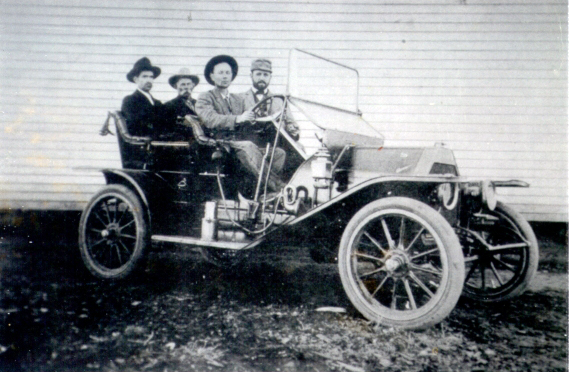 Elmore City, a village located in southwestern Garvin County at the juncture of State Highways 74 and 29, was founded to supply the needs of an agrarian population. With the 1920s development of area oil fields Elmore City became a central supplier for the petroleum industry. In recent years the mechanization of agriculture and the decline in petroleum exploration have negatively impacted the city's population.

Although several ranches began in the area in the early 1880s, no one is sure when civilization supplanted the rustlers infesting Rock Creek, the community's original name. The first record of a residence at present Elmore City came during Fr. Hilary Cassal's 1885 Catholic missionary tour. The travelers found a family living at the Rock Creek bridge, twelve miles southwest of White Bead Hill on the road to the Robberson community. Shortly afterward, Jasper N. Black opened a general store at a crossroads northeast of the present town, and his enterprise formed the nucleus of a community called Banner. As folks moved in, settlement spread southwest, and on June 11, 1890, a post office, named for merchant J. O. Elmore, was established.

In 1898 Elmore incorporated and first appeared on U.S. Geological Survey maps. In 1908, though lacking a railroad, the town was strong enough politically to vie for the county seat but lost the election because floodwaters prevented voters from reaching the polls. Postal address confusion with Elmer, a Jackson County town, caused Elmore to be renamed in 1910 as Banner. However, residents preferred the original name, and a community in Canadian County wanted the Banner designation, so Elmore City came into being in 1911. The town's population increased from 192 in 1910 to 337 in 1930. After reaching 982 in 1960, the number of residents declined to 756 in 2000 and to 697 in 2010.

The following (as per The Chicago Manual of Style, 17th edition) is the preferred citation for articles:
Mike Tower, “Elmore City,” The Encyclopedia of Oklahoma History and Culture, https://www.okhistory.org/publications/enc/entry.php?entry=EL011.