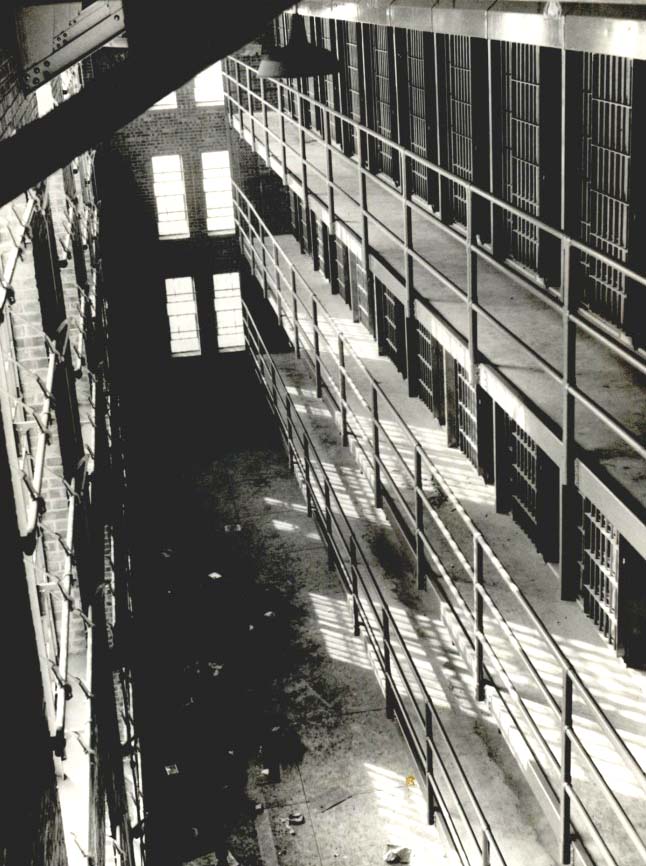 The Federal Correctional Institution (FCI El Reno), El Reno is a medium-security prison in Oklahoma, located some thirty miles west of Oklahoma City. It is part of the Federal Bureau of Prisons, a division of the U.S. Department of Justice. The Justice Department has sixty-four other medium-security correctional institutions, which are not to be confused with maximum-security U.S. Penitentiaries.

Created by Congress in May 1930 and originally titled the United States Southwestern Reformatory, FCI El Reno sits on a one-thousand-acre tract at the southeast corner of Fort Reno reservation, a former U.S. Army Remount Station two miles west of El Reno, Oklahoma. The prison's service area included all states west of the Mississippi River plus the states of Missouri, Alabama, Louisiana, Mississippi, and parts of Tennessee and Illinois. In 1938 the facility was renamed Federal Reformatory, El Reno.

The original appropriation by Congress totaled $3 million. Due to a shortage of funds during the Great Depression, final expenditures came to only $1 million, a reduction that required reducing the original plans drawn by the architectural firm of Hawk and Parr of Oklahoma City. Workers broke ground on January 2, 1932. An official public opening occurred on February 11 and 12, 1934. H. I. Merry, the first superintendent, and attending officials placed government documents, including a list of the names of all those attending, in a brass box and sealed it in the cornerstone of the Administration Building. The first prisoners arrived from the U.S. Penitentiary in Leavenworth, Kansas, and the Eastern Reformatory in Chillicothe, Ohio, on April 4 of that same year.

Despite cutbacks in the plan, the new inhabitants found a spacious facility as their new home. Four tall concrete pillars stand at the entrance to the Administration Building, which housed the general administrative offices, the inmate intake facility, and an auditorium and medical facilities, including a hospital, an operating room and a dental office.

Behind the two main buildings, along each side of the oval were four one-story brick army-barracks-type buildings with the barred windows. Each included not only the rooms, or cells, but also a recreation room with chairs, a living room, a barbershop, and a small library. Special housing, called the "honors dorm," was built for prisoners who exhibited especially good behavior and conformity to institutional regulations. Outside the oval sat a baseball field and volleyball courts.

The first arrivals and those who would follow were first-time inmates, aged 18 to 26, who had not been judged habitual criminals. While this was (and is) a medium-security institution, there were enough regulations to let the inmate understand that he was not a free man. He could not have visitors for the first thirty days of incarceration. During the second thirty-day period, he was allowed one thirty-minute visitation by a family member. After the initial sixty-day period, visitations were still limited to one two-hour session or two one-hour sessions per week. For his entire stay at El Reno, a prisoner could send or receive only two letters per week subject to staff censorship. From the first days of incarceration, an inmate was immediately assigned a parole officer to oversee his progress toward rehabilitation. The officer submitted periodic reports to the State Parole Board that included any disciplinary actions on infractions of institutional rules.

As implied in the title "reformatory," the institution stressed rehabilitation, not punishment. The staff tested newly arrived inmates for level of education and classified them by educational abilities and psychological make-up. Advisors devised academic programs based on abilities to learn. Follow-up interviews tracked advancement and achievement. Inmates could take high school classes and even college-level correspondence courses. Classes in math and English for grades one through five were compulsory for inmates lacking those skills. Also available were courses in mechanical drawing and business office practices. One could even take correspondence courses for college achievement.

In 1934 vocational education was an important part of the program. There was a weaving factory for those who wanted to learn the weaving trade; they made cotton toweling, blankets and wool suit fabric. During World War II the weaving factory produced 25,000 cargo nets for the U.S. Navy. The broom factory was the only one in the federal prison system. It produced brooms for all federal agencies and also aided the local economy by using locally grown broom corn. Later, a print shop was added; it printed the institution's own The Outlook newsletter along with other government documents. Also popular were carpentry and welding classes. Besides learning a trade, when an inmate took these classes he could keep half of the wages and send the other half to his family. Perhaps the most unique of all the job-training programs is the reformatory farm. Situated on more than 240 acres located south of the main buildings, the farm is includes a vegetable plot, forage crops, wheat fields for poultry feeding and dairy cows.

When they were not working or going to school, inmates spent their time competing in inter-dormitory contests of baseball, basketball, dominos, chess, or volleyball. When not engaged in sporting activities, one might find inmates watching the weekly movie, participating in plays held in the auditorium, or attending church services conducted by a full-time protestant chaplain or a Catholic priest. Bible classes were held every Wednesday evening.

In the late 1970s the reformatory was renamed the Federal Correctional Institution, El Reno (FCI El Reno and became a medium-security prison for men of all ages. In 2016 FCI El Reno housed approximately 1,200 inmates. It is one of only two U.S. Bureau of Prisons FCIs that still operates a minimum-security farm.

The following (as per The Chicago Manual of Style, 17th edition) is the preferred citation for articles:
Glen R. Roberson, “Federal Correctional Institution, El Reno,” The Encyclopedia of Oklahoma History and Culture, https://www.okhistory.org/publications/enc/entry.php?entry=FE019.