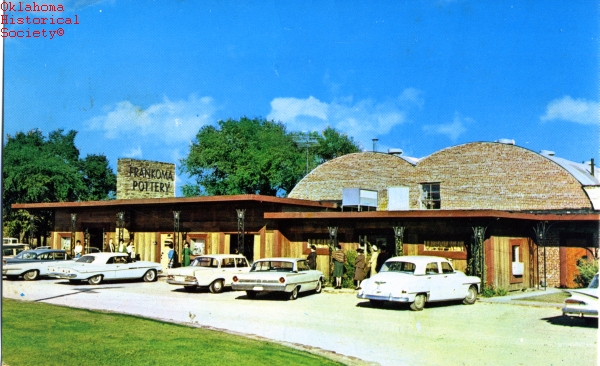 John Frank established Frank Potteries, Oklahoma's first commercial pottery, in Norman, Oklahoma, in 1933 during the Great Depression. Frank, who had studied at the Chicago School of Art, was invited in 1927 by Dr. Oscar Jacobson to head the new ceramics department at the University of Oklahoma. In 1934 Frank incorporated and renamed his enterprise Frankoma Pottery. He continued to teach until he decided to work full time in his business in 1936. With knowledge gained from Oklahoma geologists, he located and experimented with different clays until he found favorable clay in Ada, Oklahoma.

When Frank moved his operation to Sapulpa, Oklahoma, in February 1938, he continued to haul clay from Ada, which required a three-day trip. In 1954 he discovered that the clay in Sugar Loaf Hill near Sapulpa worked well for his pieces. The change from the light tan Ada clay to the red brick color of the Sapulpa clay also changed the final coloring of his pieces. Most of the glazes have names relating to nature, such as Desert Gold, Prairie Green, Redbud, and Sky Blue. He experimented with formulas using rutile, a mineral that contains titanium dioxide, which allows the color of the clay to partially show through the glaze.

Although Frankoma Pottery has produced numerous items, such as vases, political and Toby mugs, and artware, it is best known for its dinnerware and commemorative Christmas plates. Through the years the dinnerware has had five patterns. The popular "Wagon Wheel" design appeared in 1942 and was discontinued in 1988. During Robert S. Kerr's tenure as governor (1943–47) Frank presented a set of dinnerware to each of the other forty-seven states' governors, thereby promoting the business. Frankoma Pottery issued a commemorative plate for the Diamond Jubilee of Statehood in 1982.

Beginning in 1960 the youngest Frank daughter, Joniece, worked by her father's side and began designing pieces. In 1971 John Frank was honored as the Outstanding Small Businessman in Oklahoma and the United States. Joniece Frank inherited the business after her father's death on November 10, 1973. Despite fires that destroyed the plant in 1938 and 1983 and a bankruptcy in 1990, Frankoma Pottery remained in operation. In March 1991 Richard Bernstein, a Maryland pewter maker and investor, purchased the company and appointed Kyle Costa as president and Joniece Frank as vice president. At the turn of the twenty-first century Frankoma Pottery employed approximately fifty employees. Its pieces had become collectors' items, resulting in the formation of Frankoma Family Collectors Association in 1994.

Frankoma Pottery closed and was sold in 2008 and again in 2010. The trademark and molds, however, were reserved. In 2012 a Houston company acquired them. It has manufactured Frankoma Pottery artware and novelty items.

The following (as per The Chicago Manual of Style, 17th edition) is the preferred citation for articles:
Linda D. Wilson, “Frankoma Pottery,” The Encyclopedia of Oklahoma History and Culture, https://www.okhistory.org/publications/enc/entry.php?entry=FR005.