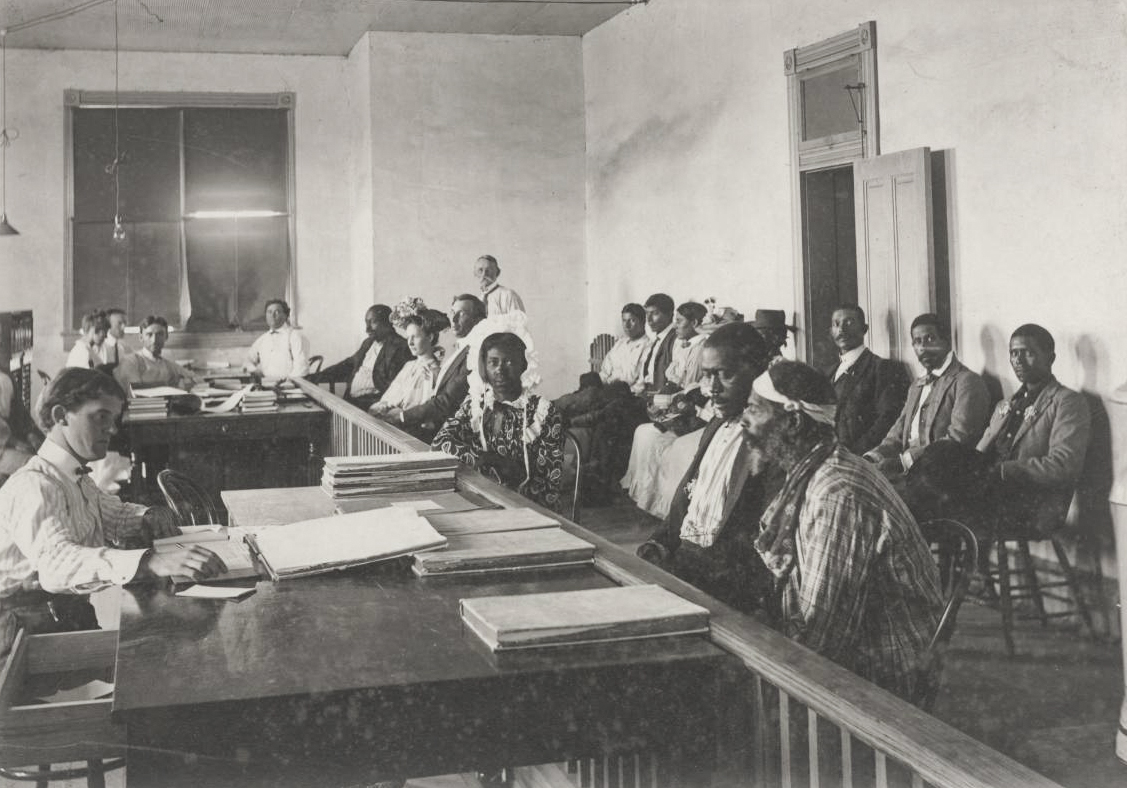 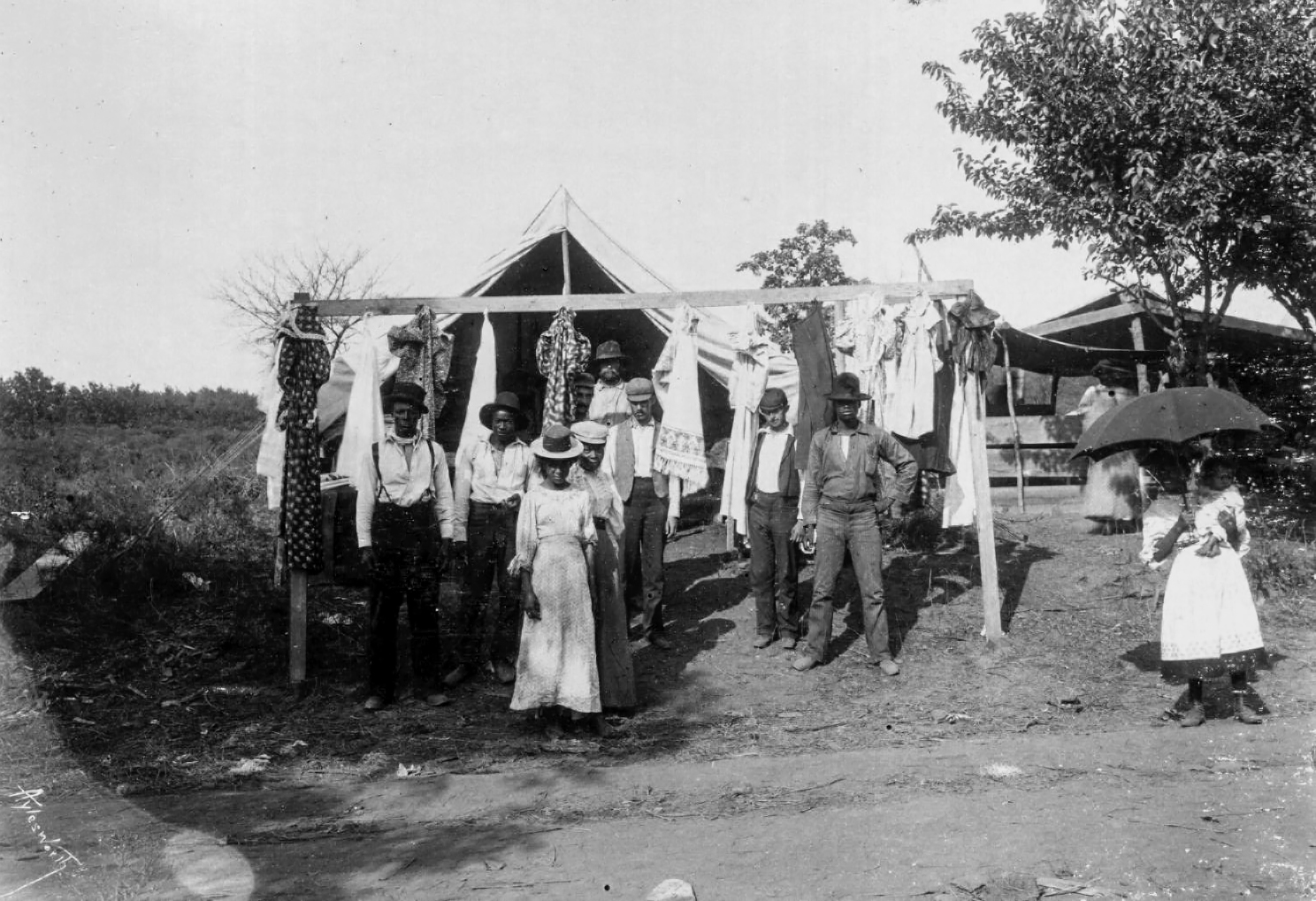 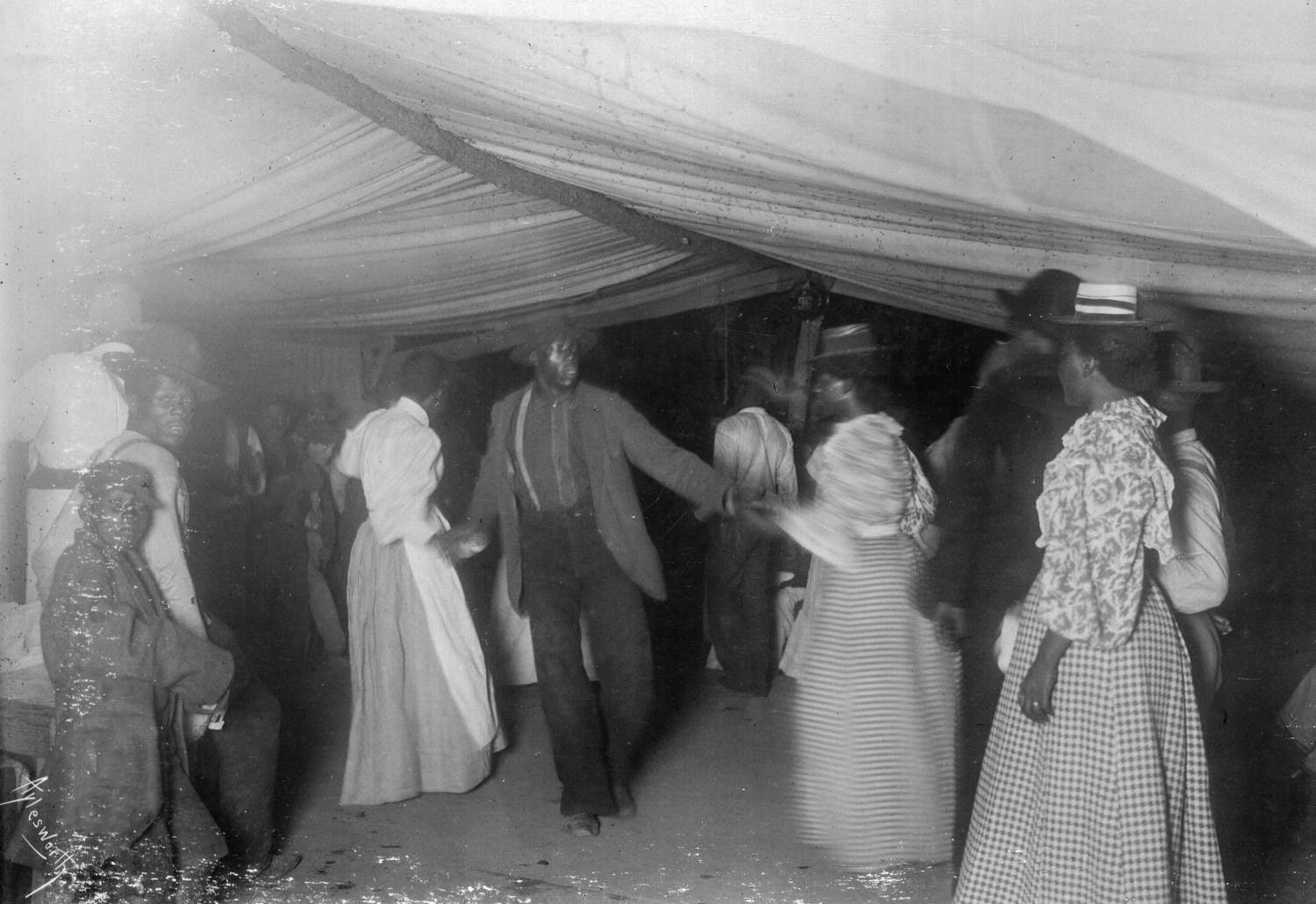 The forced removal of the Five Tribes from their homelands in the southeastern United States to Indian Territory in the 1830s also included the African American slaves owned by many tribe members. The transition of these slaves to American citizenship is unique in the history of race relations in the United States. It was a journey filled with contentious negotiation among factions of the Indian nations, the federal government, capitalist developers, black and white agricultural colonizers, and the freedmen themselves. Efforts to secure the rights of the freedmen represented one aspect of the struggle that ultimately opened Indian lands to non-Indian settlement.

By the time of the outbreak of the Civil War in 1861, the tribes' members owned approximately ten thousand slaves. Unlike slavery in the southern states, the form of slavery in Indian Territory widely varied. The Creek and Seminole often intermarried with their slaves and allowed a broad range of freedoms. The Cherokee resisted intermarriage but pursued benign relationships on their small farms. The Choctaw and Chickasaw more closely approximated the system of white slaveholders on the cotton plantations. In all cases the slaves adapted to the patterns of the Indian cultures in dress, food, language, and communal landholding. Episodes of mistreatment and violence occurred, but more often, runaway slaves came to Indian Territory because they believed it to be a less race-restrictive environment.

As the Civil War began, tribal factionalism that had begun at the time of removal resurfaced in violence over the issues of slavery and sectional loyalty. Some Indians declared their allegiance to the Union, but other groups from all of the Five Tribes signed agreements with the Confederacy to provide supplies and troops. The slaves were caught in the crossfire. The war in Indian Territory began with an attack on loyal Creeks, Cherokees, and runaway slaves retreating toward Kansas in 1861. In the next four years guerrilla raiding by both Union and Confederate Indian units and desperate foraging destroyed many of the prosperous farms, businesses, and homes of the territory.

The Cherokee national government freed their slaves in June 1863, the only one of the Five Tribes to do so until after the war, although few slaveholders acknowledged this law. Black Indians joined both the Union and Confederate armies, leaving their elderly, women, and children behind. Many slaveholding Indians sold their slaves and left the territory. Others remained on their lands until the violence forced them to retreat with their slaves to Arkansas or south to the Red River and into Texas. Black Indian refugees fled to Kansas, moved onto the farmlands previously occupied by their owners, or huddled for protection near Fort Gibson. Hunger, disease, exposure, fear, and violence marked their lives. When the war ended with Cherokee Brig. Gen. Stand Watie's surrender in June 1865, the Five Tribes no longer exercised the autonomy over their own tribal affairs.

Federal government officials refused to recognize the divisions within the tribes' leadership or the contributions of the loyal factions to the war effort, choosing instead to deal with them all as rebels and to enact a punitive peace agreement. Tribe leaders met first at Fort Smith, Arkansas, and later in Washington, D.C., to conduct treaty negotiations. Sizeable land cessions, railroad right of way, and a unified territorial government were among the government demands, but the most complex issue dealt with the fate of the freedmen. The government insisted on the abolition of slavery and the incorporation of the freedmen into their respective tribal groups with full citizenship rights. All of the Indian nations were willing to end slavery, but citizenship rights conferred access to land and tribal monies as well as political power. This issue prolonged the negotiations. When reports reached Washington that the freedmen were being mistreated and kept in bondage, Maj. Gen. John Sanborn was dispatched to investigate the charges, distribute supplies to alleviate some of the suffering, and make clear the government's position with regard to freedmen's rights. Indian leaders resented Sanborn's interference and the elevated status of their former slaves.

Each treaty dealt with the freedman problem in some way. The Seminole promptly concluded their treaty in March 1866, granting full citizenship to their freedmen. After extensive negotiations, northern and southern Creek factions agreed to a similar treaty. The Choctaw and Chickasaw remained opposed to the adoption of the freedmen. Their treaty, signed in late April, held $300,000, proceeds from the sale of their western lands, in trust until the tribes passed laws recognizing the rights of their freedmen. If these laws were not forthcoming, the government would remove the freedmen from Choctaw and Chickasaw lands and use the money on their behalf. The Choctaw did not grant citizenship rights to their freedmen until 1883, and the Chickasaw never adopted theirs. The government refused to carry out its responsibility of removing the freedmen as well, leaving them in helpless limbo. In July 1866 the Cherokee were the last group to conclude their treaty. They allowed adoption of the freedmen residing in the Cherokee Nation at the time of the treaty signing and those who would return within a six-month time period. In November the Cherokee amended their constitution, granting full citizenship to their freedmen.

Life for the freedmen, their acceptance and assimilation, generally followed patterns set before the war. The children of Seminole and Creek freedmen attended segregated schools, and freedmen voted and served in political posts in the tribal governments. The Cherokee offered the best educational opportunities, operating seven freedmen schools by 1875 and opening a high school in 1890. Cherokee freedmen voted in the national elections, and Joseph Brown was elected to the National Council in 1875. Choctaw freedmen had no tribal-affiliated schools until 1887 and then only one, Tuskalusa Colored Academy. The Chickasaw refused to support any education for freedmen. Inasmuch as both the Choctaw and Chickasaw labored intensively to remove any freedmen from their lands, voting and political participation were nonexistent. Social interaction, outwardly peaceful in most of the territory, sometimes changed to racial violence when freedmen attempted to exercise their rights.

In the last two decades of Indian Territory Indians and freedmen faced complicated choices about citizenship and land ownership that ruptured any remaining ties between the two. Both Cherokee and Creek freedmen waged lengthy challenges through the United States courts for their rightful share of tribal monies gained in land sales. Both cases were decided in favor of the freedmen. In 1879 Cherokee attorney Elias C. Boudinot publicized the possibility of occupying unassigned lands in Indian Territory. This set off a rush of colonization schemes that included among them the Freedmen's Oklahoma Association, headed by J. Milton Turner and Hannibal C. Carter. Agitation for an all-black state gained an audience. Freedmen from adjoining states had slipped into the territory for years, intermarrying with their black Indian counterparts or homesteading illegally, but now the opening of Indian lands to non-Indian settlement gained momentum and brought hundreds of migrants both black and white. Railroad construction, mining operations, and economic development brought in hundreds more. The Indian freedmen initially resented the black immigrants, called "state Negroes," fearing that they would aggravate the already uneasy relationship with the Indians. Racial solidarity grew, however, as Indian hostility toward all African Americans increased under the influence of large numbers of white southerners moving into the territory.

The General Allotment Act of 1887 created the Dawes Commission to bring about the dissolution of tribal governments and the allotment of land to individual tribal members. The commission had no authority to override the Indian governments, however, until the passage of the Curtis Act in 1898. The enrollment process became a nightmare of bureaucratic paperwork that placed the burden of proof of tribal membership on the applicants themselves. Mixed-blood black Indians were all enrolled as freedmen with no Indian blood. When stalling tactics failed the Indian governments, they used every measure at their disposal to limit the number of freedmen admitted to the rolls. Once again the freedmen challenged the obstruction of their citizenship rights through the United States courts, and the litigation dragged on long after Oklahoma statehood. When the rolls closed in 1907, freedmen eligible for land allotments numbered 23,415. Oklahoma statehood brought new challenges for the African Americans who had been slaves of the Five Nations, but their history as citizens of their respective tribal groups represented a unique period in American race relations.

Gary R. Kremer, "'For Justice and a Fee': James Milton Turner and the Cherokee Freedmen," The Chronicles of Oklahoma 58 (Winter 1980–81).

Walt Wilson, "Freedmen in Indian Territory During Reconstruction," The Chronicles of Oklahoma 49 (Summer 1971).

The following (as per The Chicago Manual of Style, 17th edition) is the preferred citation for articles:
Linda Reese, “Freedmen,” The Encyclopedia of Oklahoma History and Culture, https://www.okhistory.org/publications/enc/entry.php?entry=FR016.