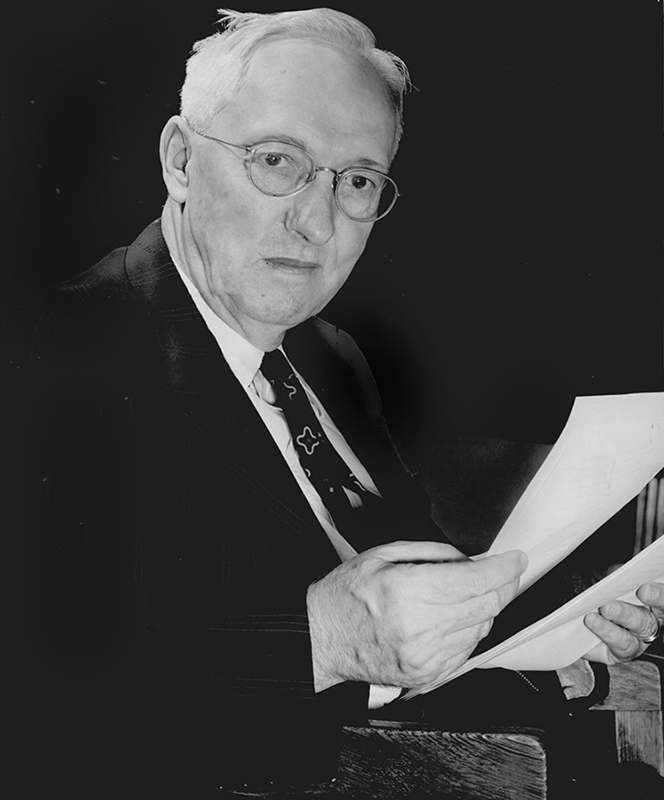 A professor of history and a key administrator at the University of Oklahoma (OU) for more than fifty years, Roy Gittinger was born in Melrose, Iowa, on January 12, 1878. While a student at Simpson College, in Indianola, Iowa (1897–99), he met and married Frances Price. The pair came to Moore, Oklahoma, to teach school, but when the school closed, they moved to Norman in 1900, and Gittinger enrolled as a student. He soon came to the attention of OU's president, David Ross Boyd, who, upon Gittinger's graduation in 1902, appointed him the principal of the University's Preparatory (pre-college) School and an instructor of history. Gittinger went on to earn a master's degree from the University of Chicago (1906) and a Ph.D. from the University of California, Berkeley (1917), where he studied under the famous historian of the American Southwest, Herbert Eugene Bolton. Gittinger's dissertation, an important contribution to Oklahoma historiography, was published as The Formation of the State of Oklahoma (1917).

Although trained as an American historian, Gittinger spent his career teaching English history because, when he arrived, the History Department already had an Americanist, James Shannon Buchanan. Gittinger's principal legacy to the university, however, was his work as an administrator; he served under each of the school's first seven presidents and provided a kind of administrative continuity to the institution. On May 20, 1950, upon his formal retirement (he would continue to teach until 1956), the OU president George Lynn Cross wrote to Gittinger, "In my opinion, you have made a greater contribution to the University of Oklahoma than any other person in the entire history of the institution. No one else has served the University for as long a period of time. No one else has served the institution in such a versatile manner. And no one's services have been of better quality than your own."

Cross's assessment was based on Gittinger's performance in a variety of administrative positions. In addition to his half-century of teaching, he was the dean of undergraduates (1915–22), registrar of the institution (1919–25), acting dean of the Graduate School (1925–26), dean of administration (1926–41), and the dean of admissions (1941–46). For a quarter- century he undertook the arduous job of preparing and editing the university's annual catalogue. He was named the first Regents' Professor in the school's history. "Dean Gitt," as he was universally called, earned a reputation as a stern enforcer of high academic standards, a strict disciplinarian, and a relentless foe of student frivolity and misbehavior. This posture caused him to become a regular target of student jokes and caricatures, but in general, he was respected and admired for his fairness and for his absolute loyalty to the institution. During World War I Gittinger was the head of the Cleveland County Council of Defense, which, in pursuit of patriotic wartime activities, was sometimes guilty of highly questionable methods. He was also active in the alumni organization and in Norman politics, serving occasionally on the city council.

Gittinger was blessed with a legendary memory for long-past events and personalities. (President Cross thought that, prior to the school's expansion in the 1930s, "there wasn't a student whose name Dr. Gittinger didn't know.") His unparalleled ability to remember the past made him the logical choice to write the school's history in connection with its fiftieth anniversary in 1942. Gittinger's The University of Oklahoma: A History of Fifty Years, 1892–1942 remains an indispensable source. Just as valuable was his substantial, unpublished account of the scandalous political interferences with the university in 1908 and 1911, which is available in typescript.

Gittinger was inducted into the Oklahoma Hall of Fame in 1945. The Social Science Building was named Gittinger Hall in March 1951, and he maintained an office there until his death, at the age of seventy-nine, on October 13, 1957.

The following (as per The Chicago Manual of Style, 17th edition) is the preferred citation for articles:
David W. Levy, “Gittinger, Roy,” The Encyclopedia of Oklahoma History and Culture, https://www.okhistory.org/publications/enc/entry?entry=GI010.