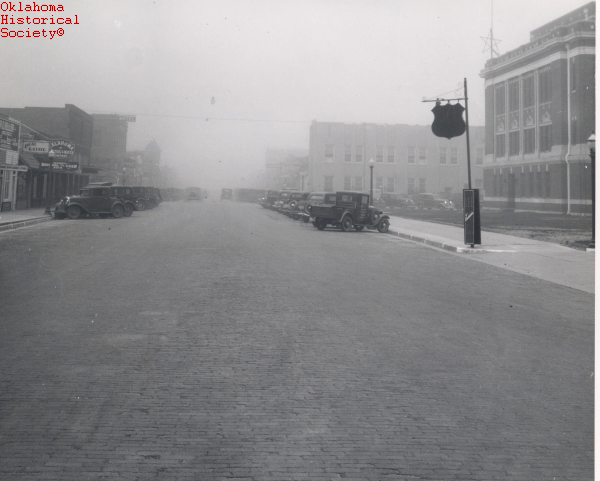 The seat of the Panhandle's Texas County, Guymon lies ten miles southwest of Optima on U.S. Highways 54, 64, and 412 and State Highways 3 and 136, creating a transportation hub. The area stood in No Man's Land for most of the nineteenth century. In 1890 the Organic Act assigned this public strip to Oklahoma Territory. By this time the ranching-dominated region had begun to attract settlers, mainly farmers. In 1902 the Chicago, Rock Island and Pacific Railway Company laid tracks southwest from Liberal, Kansas, to Texas at present Texhoma. Earlier, plans had begun to locate a town at a place known as the Sanford Switch on the proposed railroad line. The Inter-State Land and Town Company managed the townsite. In 1901 the U.S. Post Office Department designated a Sanford post office, which was renamed Guymon less than a month later. The new name honored Edward T. Guymon, president of the townsite company. In 1904 the plat was filed in Beaver County, Oklahoma Territory.

Most of the businesses from nearby Hardesty relocated to the new railroad town, including Richard B. Quinn and his Hardesty Herald, which became the Guymon Herald. By 1907 Oklahoma statehood the burgeoning town accommodated 839 residents, increasing to 1,342 in 1910. In 1911 three banks, two newspapers, the Herald and the Guymon Democrat, four doctors, three hotels, a cooperative flour mill, a grain company, and a number of retail outlets served the community. In 1920 the population stood at 1,507, and it reached 2,181 in 1930. In 1926 construction began on the Texas County Courthouse. Agriculture spurred the area economy, and in 1932 the community had two cream stations and five grain elevators. The 1930s also brought the Dust Bowl, with Guymon situated in the geographical area that experienced the brunt of severe wind damage. One of the worst dust storms occurred on April 14, 1935, a date that many called "Black Sunday."

Although the Guymon community was battered by the Dust Bowl and the Great Depression, the 1940 U.S. Census showed that the population had increased to 2,290. The nearby Hugoton-Panhandle gas field created opportunities for employment and wealth. In 1946 the town and its vicinity benefited from two carbon black plants, the Dandee Manufacturing Company (makers of farming equipment), an ice plant, the OK Welding Manufacturing Company, a feed mill, the Phillips Petroleum cracking plant, and the Southwestern Public Service Company generating plant. The community still supported two banks, and the Panhandle Herald remained in publication. In 1949 Guymon Municipal Hospital (later Memorial Hospital of Texas County) opened. By 1950 the Guymon population had mushroomed to 4,718, and ten years later it had climbed to 5,768.

The 1960s provided more industry as the Guymon area's pioneer ranch, the Hitch Ranch, began opening cattle feedlots. These attracted the Swift and Company packing plant and a computer service, Diversified Data, Incorporated (affiliated with the ranch). By 1980 the population stood at 8,492, but it declined to 7,803 in 1990. In the 1990s Seaboard Farms began locating corporate hog farms in the Panhandle, with two in the Guymon area. At the beginning of the twenty-first century Seaboard was the vicinity's largest employer, followed by Hitch Enterprises, Incorporated, the Guymon Public Schools, the City of Guymon, the Panhandle Telephone Cooperative, and the hospital. A council-manager form of municipal government administers the city. The agriculture industry has attracted a large Hispanic population, representing 38.1 percent of the town's population of 10,472 in 2000. In 2010 the population stood at 11,442, with 51.5 percent identified as Hispanic. In that year Guymon had the state's fourth-largest Hispanic community, ranking behind Oklahoma City, Tulsa, and Lawton.

The school system dates to 1902–03, and in 1917 the city built a separate building for the high school. Guymon schools closed one year during the Great Depression due to lack of funds. In 1954 the town dedicated a new high school, which was replaced in 1974. In 2000 the school system enrolled 2,217 students in grades prekindergarten through twelve. In 1933 the city hosted the first Pioneer Days Celebration, featuring a parade, rodeo, and carnival. At the beginning of the twenty-first century the popular annual event still attracted large crowds. Since 1923 Guymon has had a golf course, and a full eighteen-hole facility opened in 1975. In 1984 the Texas County Courthouse (NR 84003439) was listed in the National Register of Historic Places. Three area archaeological sites are also listed.

The following (as per The Chicago Manual of Style, 17th edition) is the preferred citation for articles:
Larry O'Dell, “Guymon,” The Encyclopedia of Oklahoma History and Culture, https://www.okhistory.org/publications/enc/entry.php?entry=GU007.